ci is using Smore newsletters to spread the word online.

Get email updates from ci:

The Akepa Bird is the smallest honeycreeper. It has orange feathers and a tiny beak. It weighs four inches ten grams. It has rounded heads, black eyes, and black wings and tail. Adult males have the most brilliant orange colors found in any other birds. Females are greenish gray on back and lighter gray on the front. It has yellow or sometimes orange on the belly. (EOL)

The Akepa bird prefers to live in wet and dry places. It drinks nectar from flowers. It is very dependent on the 'Ohia-lehua trees and the koa trees for food. The Akepas like to eat caterpillars and warm insects. (EOL)

The Akepas hunt in groups for safety. They also sing songs, but you must be really quiet in order to hear them! Whenever predators are near, they hide up in trees. They have a warbling trill to warn others of danger. (EOL) 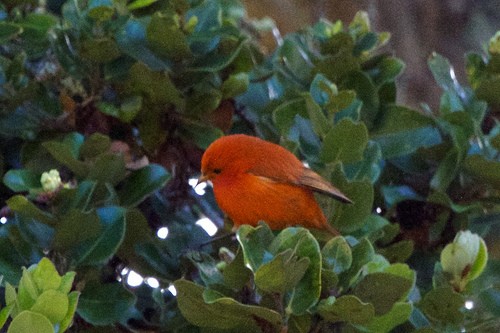 The Akepa Birds are on the verge of being endangered because people and aggressive plants and animals are a threat. Rats destroy their nests which means they lose their shelter. Since the Akepas live in high places they can get mosquito disease very easily.

Conservations like the US FWS are preserving Akepa birds. They are studying the diseases that they get and they watch them carefully. (EOL) 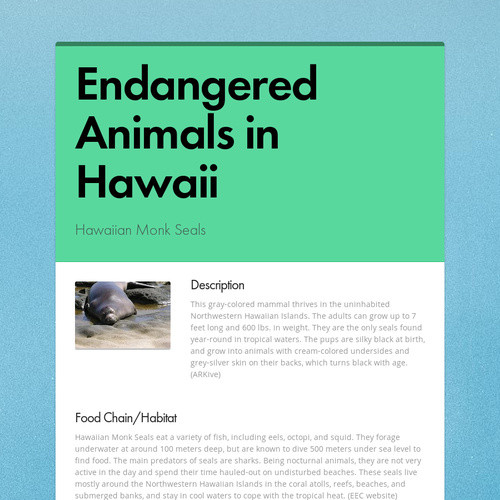 www.smore.com
This gray-colored mammal thrives in the uninhabited Northwestern Hawaiian Islands. The adults can grow up to 7 feet long and 600 lbs. in...

ci is using Smore newsletters to spread the word online.

Follow ci va
Contact ci va
Embed code is for website/blog and not email. To embed your newsletter in a Mass Notification System, click HERE to see how or reach out to support@smore.com
close