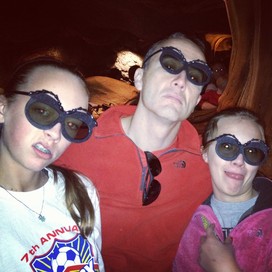 How did it begin?

In 1953-1954, a huge argument between Oliver Brown and The Board of Education was settled, and it would ever change the history of our country. This all started in Topeka, Kansas. An african american third-grader named Linda Brown had to walk one mile through a railroad switchyard to get to her black elementary school, even though a white elementary school was only seven blocks away. Her father, Oliver Brown, tried to enroll her in a white-only school, but was dismissed. He then went to National Association for the Advancement of Colored People, where they encouraged him to stand up to the Board of Education in Kansas. Other parents joined in, and eventually it went to The Supreme Court. The court kept on including the "seperate but equal" saying from Plessy to use againt Brown. Finally, the court decided that schools would slowly become intergrated. 3 years later, 9 black students arrived at Little Rock Central High. 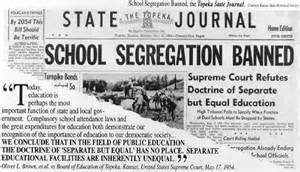 Elizabeth Eckford unaware of the other eight's meeting

On the first day of integration at Central High School in Little Rock, Arkansas, angry mobs protested outside the school. The African-American students chosen to integrate the all-white Central High, met up beforehand so that they could have a security escort through the mob scene. Only one student, Elizabeth Eckford, did not receive the message about meeting beforehand. Not knowing of the mobs and the meeting, she went to school on her own. She was immediately surrounded by an angry crowd. She tried to enter the school several times but soldiers from the Arkansas National Guard prevented her from crossing their line and entering the building. Because of this violence, the nine remained at home for more than two weeks, trying to keep up with their schoolwork as best they could. Finally, on September 23, the Nine entered the school for the first time. The again, angry mobs swarmed around the school. The Little Rock police, fearful that they could not control the increasingly unruly mob in front of the school, removed the Nine later that morning. They once again returned home and waited for further information on when they would be able to attend school. News spred to President Eisenhower. He gathered up 1200 members of the U.S. Army’s 101st Airborne Division. this enevntuallly calmed down the violence, and the nine were able to attend school.

Follow Lauren Holly
Contact Lauren Holly
Embed code is for website/blog and not email. To embed your newsletter in a Mass Notification System, click HERE to see how or reach out to support@smore.com
close