Hanisa is using Smore newsletters to spread the word online.

Get email updates from Hanisa:

The rights of the people to be secure in their persons, houses, papers, and effects against unreasonable searches and seizures, shall not be violated, and no warrants shall issue but upon probable cause, supported by Oath or affirmation and particularly describing the place to be searched, and the persons or things to be seized.

Submitted by Congress to the stated on September 25, 1789 along with the other nine Amendments that comprise the Bill Of Rights. Seeks to balance the civic need for effective law enforcement with the individuals rights to privacy and property by prohibiting police from " unreasonably " conducting searches or seizing property as evidence.

You have to make sure you come back with a warrant. When police search inside your house or anything you own. They are basically just searching you for no specific reason.

Police officers executed a warrant to search Iris Mena's house for deadly weapons and evidence of gang membership. Mena had rented a room in her house to a gang member who was a suspect in a drive-by shooting. At 7 a.m. on February 3, 1998, petitioners, along with the SWAT team and other officers, executed the warrant. Mena was asleep in her bed when the SWAT team, clad in helmets and black vests, entered her bedroom and placed her in handcuffs at gunpoint. The SWAT team also handcuffed three other individuals found on the property. Mena was then detained in her garage for two to three hours in handcuffs under the guard of two officers.

Mena brought a § 1983 suit against the officers, alleging that she was detained “for an unreasonable time and in an unreasonable manner” in violation of the Fourth Amendment. In addition, she claimed that the warrant and its execution were overbroad, that the officers failed to comply with the “knock and announce” rule, and that the officers had needlessly destroyed property during the search. After a trial, a jury, found that Officers Muehler and Brill violated Mena's Fourth Amendment right to be free from unreasonable seizures by detaining her in so long and awarded Mena $60,000 in actual and punitive damages. The U.S. Court of Appeals for the Ninth Circuit affirmed the verdict and the damages.

The Supreme Court of the United States began its analysis by pointing out that "Mena's detention was, under Michigan v. Summers, plainly permissible." According to the Court, the fact that Mena was an occupant of the residence being searched was sufficient to justify her detention under Summers.

The Court went on to explain that "[i]nherent in Summers' authorization to detain an occupant of the place to be searched is the authority to use reasonable force to effectuate the detention." In this case, the Court said, the governmental interest in applying handcuffs to Mena—who was already being lawfully detained—outweighed the intrusion. The court noted that the governmental interests were particularly high because this was a search for weapons and a wanted gang member resided on the premises. The Court acknowledged that the duration of detention does impact the balancing, but held that the two-to-three hour detention in handcuffs did not outweigh the government's safety interest. 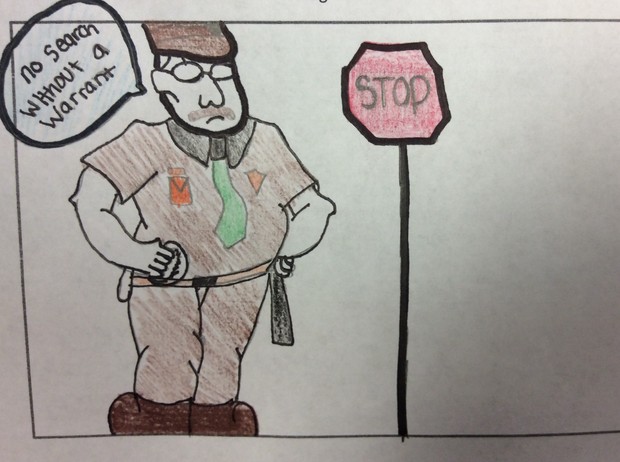 Hanisa is using Smore newsletters to spread the word online.