"If you're proud of our culture, how come you don't wear a beaded necklace?" by Everett Soop

This cartoon is by Everett Soop from the Kainai News newspaper. Everett Soop was born in Southern Alberta and was incapacitated by muscular dystrophy. He was hired by the newly-launched Kainai News newspaper to draw political cartoons and write columns. His cartoons and writings were noted for satirizing not only government agencies and their treatment of natives, but also the foibles of his own people.

Furthermore, I chose to use this cartoon in my unit because it emphasizes two main facts. The first point that this cartoon is making is about stereotypes of cultures. Humans always stereotype people from the same culture and background which is never the case. Each individual is different in that they have their own way of making sense of their culture and heritage. Students should learn to respect and appreciate the cultural diversity amongst them which is an important attitude to be met in the Program of Studies. Furthermore, this cartoon emphasizes that we should be proud of who we are and it is important to identify our identity first before trying to belong in a bigger community. For this reason, I would rate this cartoon as being a "Strong" addition in my classroom.

Reference: Soop, E. (Photographer). (1972, September ). "If you're proud of our culture, how come you don't wear a beaded necklace?" [Web Photo]. Retrieved from http://ww2.glenbow.org/search/archivesPhotosResults.aspx? 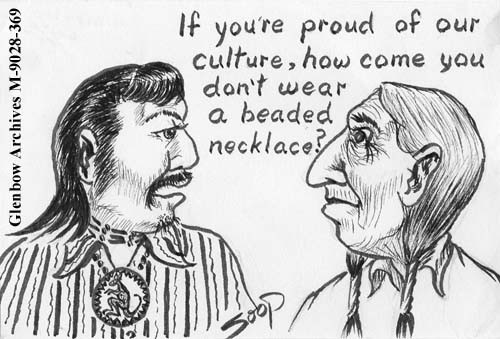