Janay is using Smore newsletters to spread the word online.

Get email updates from Janay:

The First Bank of the US, proposed by Alexander Hamilton, serve as a repository for federal funds and as the government’s fiscal agent.

The second Back of the US was headquartered in Philadelphia. A key Supreme Court decision came in the case of McCulloch v. Maryland in 1819

Greenbacks were paper currency issued by the United States during the American Civil War.

The Act created a system of national banks, a uniform national currency, and an active secondary market for Treasury securities to help finance the Civil War 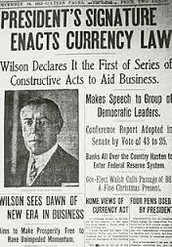 Intended to establish a form of economic stability through the introduction of the Central Bank, which would be in charge of monetary policy, into the United States.

Deepest and longest-lasting economic downturn in the history of the Western industrialized world, where the stock market crash of October 1929, which sent Wall Street into a panic and wiped out millions of investors

Designed to provide for the safer and more effective use of the assets of banks, to regulate interbank control, to prevent the undue diversion of funds into speculative operations, and for other purposes. 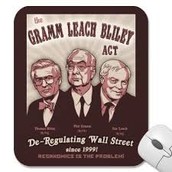 The Gramm-Leach-Bliley Act requires financial institutions to explain their information-sharing practices to their customers and to safeguard sensitive data.

Janay is using Smore newsletters to spread the word online.