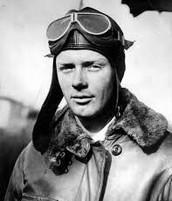 Born Charles Augustus Lindbergh; son to Charles Augustus Lindbergh Sr., a lawyer, and his wife Evangeline Lodge Land. Lindbergh was born on February 4th, 1902 in Detroit, Michigan. He spent his childhood growing up on a farm just outside of Little Falls, Minnesota. During school he excelled in mechanics and other technological skills, but at age 20 he left University of Wisconsin to become a Barnstormer (a daredevil pilot at fairs). 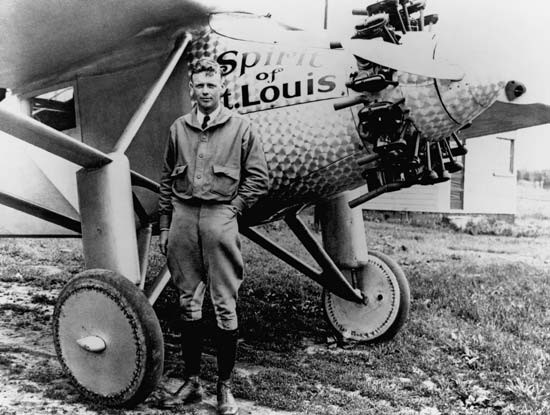 The picture above is the famous Spirit of Saint Louis that Lindbergh flew across the Atlantic ocean. Fun Fact: just twenty four hours into this famous flight, Lindbergh's flight log showed that he began to see hallucinations of fog castles and other shapes.

Why Was he Famous?

Lindbergh, a pilot by hobby and now trade, became famous for a trip that he took on May 27th, 1927. On this fateful day, Lindbergh embarked on a journey from New York City to Paris, France that would take him only thirty three and a half hours to complete. His motive behind completing this was $25,000 that he eventually was awarded, the Orteig Prize. Just five years later, tragedy struck the Lindbergh home. Their 20 month old son, Charles Lindbergh Jr. was kidnapped from the Lindbergh's New Jersey home. As said by papers across the country, the trial that followed the discovery of their son, who was found ten weeks later brutally murdered by a blow to the head, was the "trial of the century".

Unknown by many, Charles Lindbergh is actually one of the fathers of the artificial heart; teamed with nobel prize winning French surgeon, Alexis Carrel, they worked on a method for keeping organs alive outside the body. By 1935, Lindbergh developed a perfusion pump made of Pyrex glass capable of moving air and life-giving fluids through excised organs to keep them working and infection free.

Lindbergh was also known as a staunch conservationist; before his death in 1974, he also lived among the indigenous tribes in Africa and Philippines. He also helped procure land for the formation of Haleakala National Park in Hawaii.

Lindbergh was barred from serving from serving in the armed services after Pearl Harbour because Franklin Delano Roosevelt thought that he was an anti-semite and Nazi sympathizer.

Charles Lindbergh is important to United States history because he was the first person to fly nonstop across the Atlantic ocean unassisted. By doing this, he gained much notoriety that he used to fund and support scientists and inventors such as Robert H. Goddard who developed missiles and rockets that ended up being sent to space. He impacted the 1920s greatly by bringing aviation into the limelight. As well, he impacted the entire world by starting on projects such as artificial organs and funding the early space race.