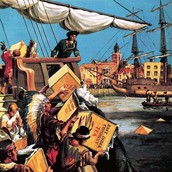 The Boston Tea Party battle was very dangers epically on December 6,1773 because the drowned at least 300 or even more chest. They had many fight only about the taxes many fights. some of the Boston knights were safe but the other just drowned