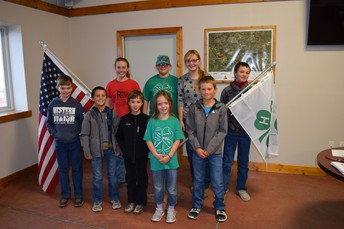 This year four members completed their Achievement Applications. Becca Reece was recognized in the Senior Division as the Outstanding Senior and received pins in Clothing and Textiles as well as Plants. Baxter Reece was awarded pins in the Junior Division for Leather and Aerospace. Boone Button received Junior pins for Beef, Horse, and Leather. Chisum Pelster was recognized as the Outstanding Junior Award as well as receiving pins in Beef, Horse, and Shooting Sports. There were also two Clover Kid members which completed their Record Books: Tilton Button and Ruger Pelster.

Diamond Clover awards are awards given based on the member’s goals they set for themselves to accomplish throughout the 4-H year. These awards are not tied to fair participation but more about learning the 4-H pledge, participating in a workshop, and more! Boone Button and Chisum Pelster both completed the Level 1 – Amethyst Clover. Tilton Button and Ruger Pelster completed the Diamond Bud Clover Kid level as well.

During the Achievement Banquet, time was also spent recognizing the wonderful Sioux County 4-H volunteers. Carmen Pelster was recognized for her two years of service and Katie Reece was recognized for eleven years of service. The Heart of the 4-H award was presented to Mike and Linda Kesselring. For several years, Mike has served as the famous Cookie Judge during fair. He also spends a great deal of time supporting 4-H on the radio. Linda was a huge help in the Extension Office last summer helping the staff prepare for County Fair and get reorganized! The Outstanding 4-H Alumni award was presented to Bill Riggs. No matter what the county is, Bill dedicates numerous hours throughout the year to help youth learn leather skills as well as others. Not only does he host workshops, serve on committees, but he also serves as a judge in multiple areas. This year during the County Fair, things had to be adapted for the COVID situation especially how food was prepared and delivered to the judges and families during the horse show. Syd with Harrison House Hotel graciously agreed to help provide these for the horse show, the art hall exhibit day, as well as the fashion show day. She went above and beyond creating delicious meals. The Harrison House Hotel was recognized as the Outstanding Business. 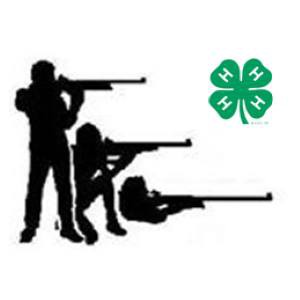 4-H enrollment for the 2020-2021 4-H year is now open. Youth can enroll by visiting ne.4honline.com. Members need to enroll prior to participating in Shooting Sports practices. 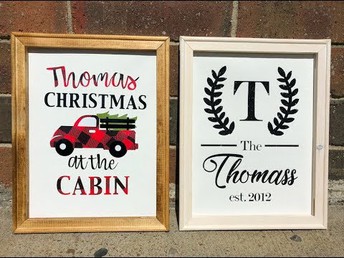 Come join us for a Reverse Canvas workshop at the Security First Bank on November 20th starting at 2:00 pm. The workshop will finish by 4:00 pm. The youth will utilize a Cricut machine to design their own artwork to place on a canvas they have reversed. The fee for this workshop is $5. Please register by contacting the Extension Office at 308-668-2428 or Melissa Mracek at mmracek2@unl.edu by November 13th.

Diamond Clover – Level Up in 4-H 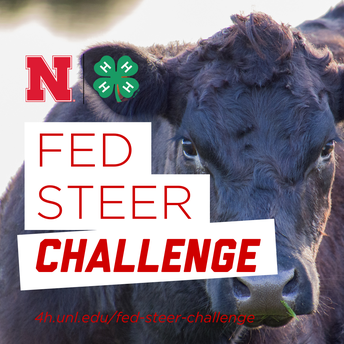 NE Fed Steer Challenge 2021 is now accepting applications! Applications due December 1st and are submitted via Qualtrics. The Nebraska 4-H Fed Steer Challenge is an opportunity for youth interested in learning more about the cattle industry and is designed to cultivate the next generation of leaders in the Nebraska cattle industry. The goal of the Fed Steer Challenge is to enhance the educational value of the traditional 4-H beef projects by providing an affordable option that rewards production merit and carcass value of the market animal, along with accurate and complete record-keeping, industry knowledge, and producer engagement by the 4-H member. To register visit: 4h.unl.edu/fed-steer-challenge.

Components of the Program include two parts:

Youth interested in participating in the Nebraska 4-H Fed Steer Challenge must: 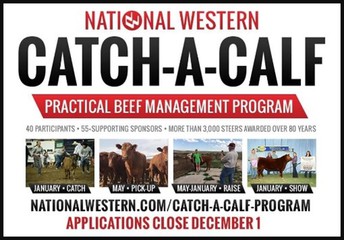 The program is open to youth that are ages 12 to 18, as of December 31st, 2020. Youth must be an enrolled 4-H member and resident of the states of CO, WY, KS or NE. To apply for the program they will go to https://nationalwestern.com/catch-a-calf-program/ and complete the online application. There is also a mandatory form that they will need to print off and complete. The application must be submitted by December 1st.

Youth sign-up to catch at a rodeo performance during the Stock Show. Youth that are successful will then receive their steer in May. The purchase price of the steer is covered by a sponsor. Youth will write monthly letters to their sponsors. They will also complete a monthly progress form that then goes in their final record book. They will return to the Stock Show the following January to exhibit their steer, along with completing an interview and turning in their record book. The overall grand and reserve grand champion of the program are allotted a spot in the Junior Livestock Auction. Other youth will receive market value for their steer, along with a portion of what the two steers in the sale make. Follow Melissa Mracek
Contact Melissa Mracek
Embed code is for website/blog and not email. To embed your newsletter in a Mass Notification System, click HERE to see how or reach out to support@smore.com
close