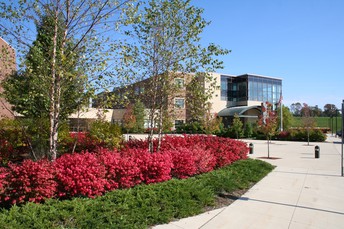 The month of April has arrived and with it comes the beginning of the fourth marking period. We are making our final preparations to administer the PSSA to our seventh and eighth grade students on April 16, 17, 30 and May 2. Additionally, our ninth grade students will be going their annual field trip to Washington, DC on and we will be holding our final Parent Council Meeting of the year.

April is the time of year when our ninth grade students really begin to set their sights on high school. All of their high school courses have been selected and there is a realization that their time at Tohickon is coming to an end. We do everything we can to make these final weeks extra special for our freshman. The DC Trip, Freshman Dance and Freshman Day are very special culminating events designed to celebrate three great years at Tohickon Middle School.

We will be hosting our annual NJHS Induction Ceremony on Thursday, April 4th at 7:00 PM. State Senator Steve Santarsiero will be delivering the Keynote to our new inductees. This is always a special evening as family and friends come together to celebrate the outstanding accomplishments of several Tohickon students.

In closing, I hope all of our Tohickon Families have a wonderful start to the Spring season. If you have any questions regarding events during the upcoming month, please contact the main office at 267-893-3300. 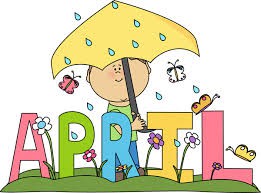 There are upcoming events that students and parents should be aware of. The events for the month of April are as follows:

The 2018-2019 PSSA Dates have been selected. We will be administering the PSSA Test as follows:

Please make every effort to schedule appointments and vacations around these dates. Parents can help their students perform well by encouraging students to take these tests seriously and seeing that students get plenty of rest during testing weeks. If you have any questions or concerns, please contact the Tohickon Guidance Office at 267-893-3310.

Once again, our Tohickon students put on a fantastic performance in our spring musical, High School Musical, Jr. There were a total of five performances, one during the school day on March 7, one that evening, and three more on March 8 and 9. It was a huge success!!!

The planning and preparation process for the spring musical begins in November with rehearsals. Once the process begins, it is a tremendous commitment on the part of our students and staff for the next several months. If you had an opportunity to attend the musical this year, you would have immediately recognized the level of passion and dedication that our students and staff have.

We are very thankful to Mr. Dengler, Mrs. Welch, Mr. Good, Mr. Powell, Mr. Weidman, Mrs. Fox and Mrs. Hecklin and all of our wonderful students that put in the effort to put together this performance!!! 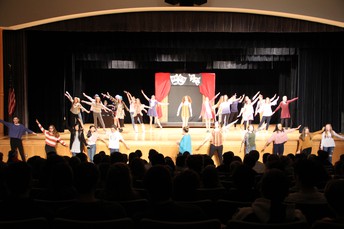 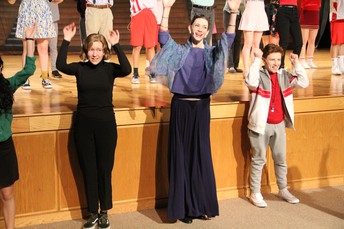 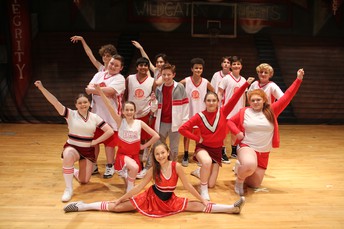 Matt Landis, author and Tamanend Middle School Teacher, presented to all grades on Tuesday, March 19. Mr. Landis discussed his latest book during the visit. It was great to have one of CBSD's own share his experiences from a published author's perspective. Following the presentation, Mr. Landis held a Writer's Workshop in the library for several of our students. 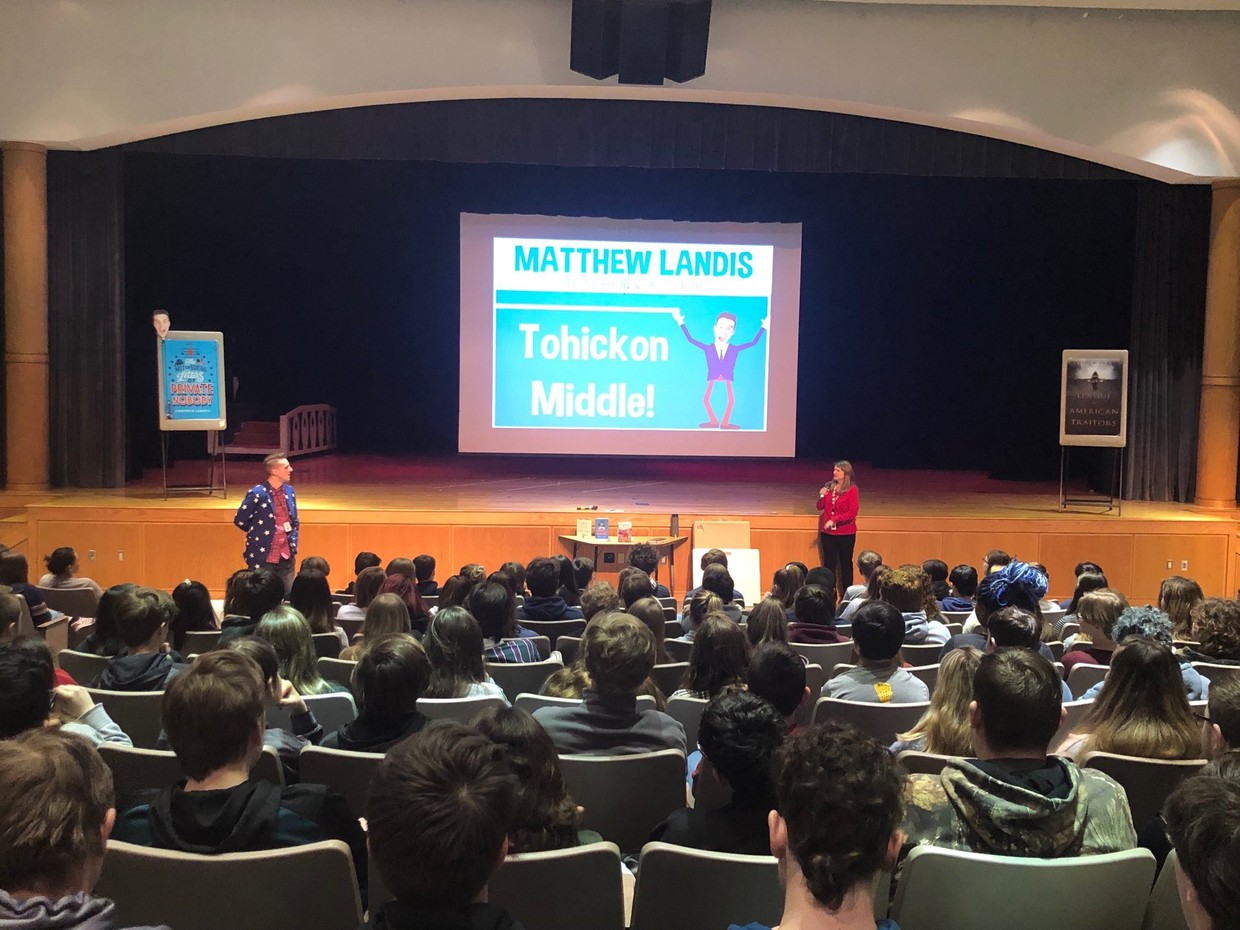 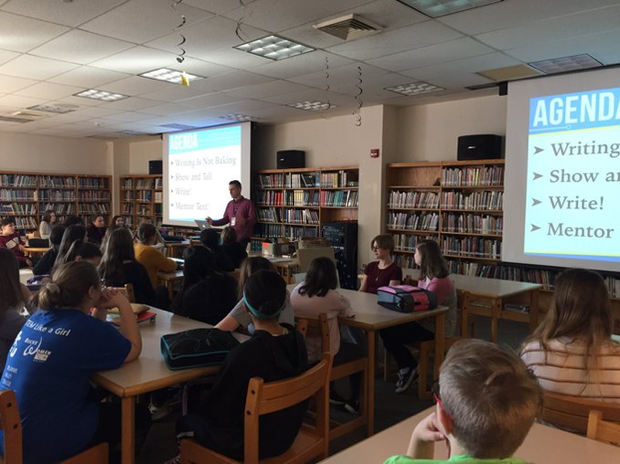 Tohickon hosted its annual Toh Jam Festival on Friday, March 22. As always, it was quite a show. During the show, attendees heard music from every CB Middle School’s Jazz Band, CB East's Jazz Ensemble, and Wissahickon Middle School's Jazz Band. Proceeds from the festival go to benefit our band program here at Tohickon!

A big thank you to all of the students that participated as well as Mrs. Sarah J. Heine, the Tohickon Band Director and host for the evening!!! 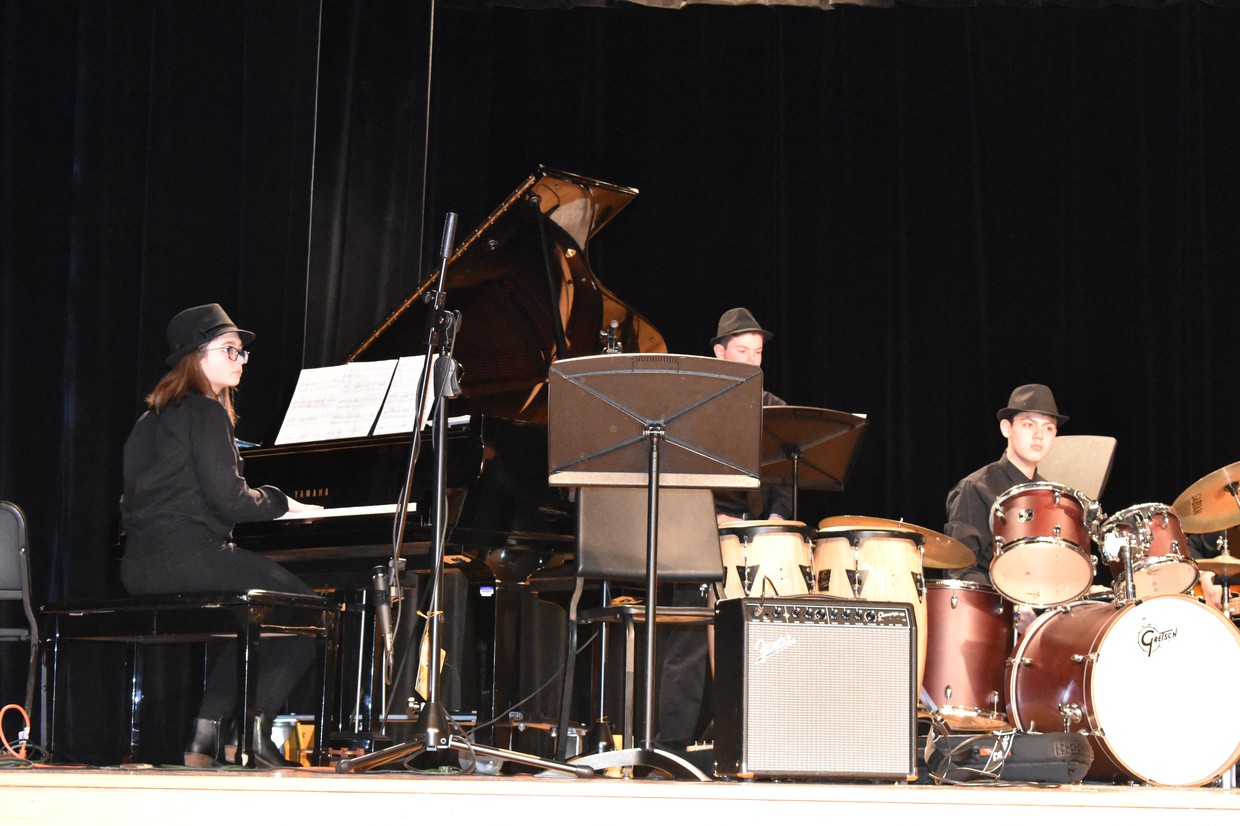 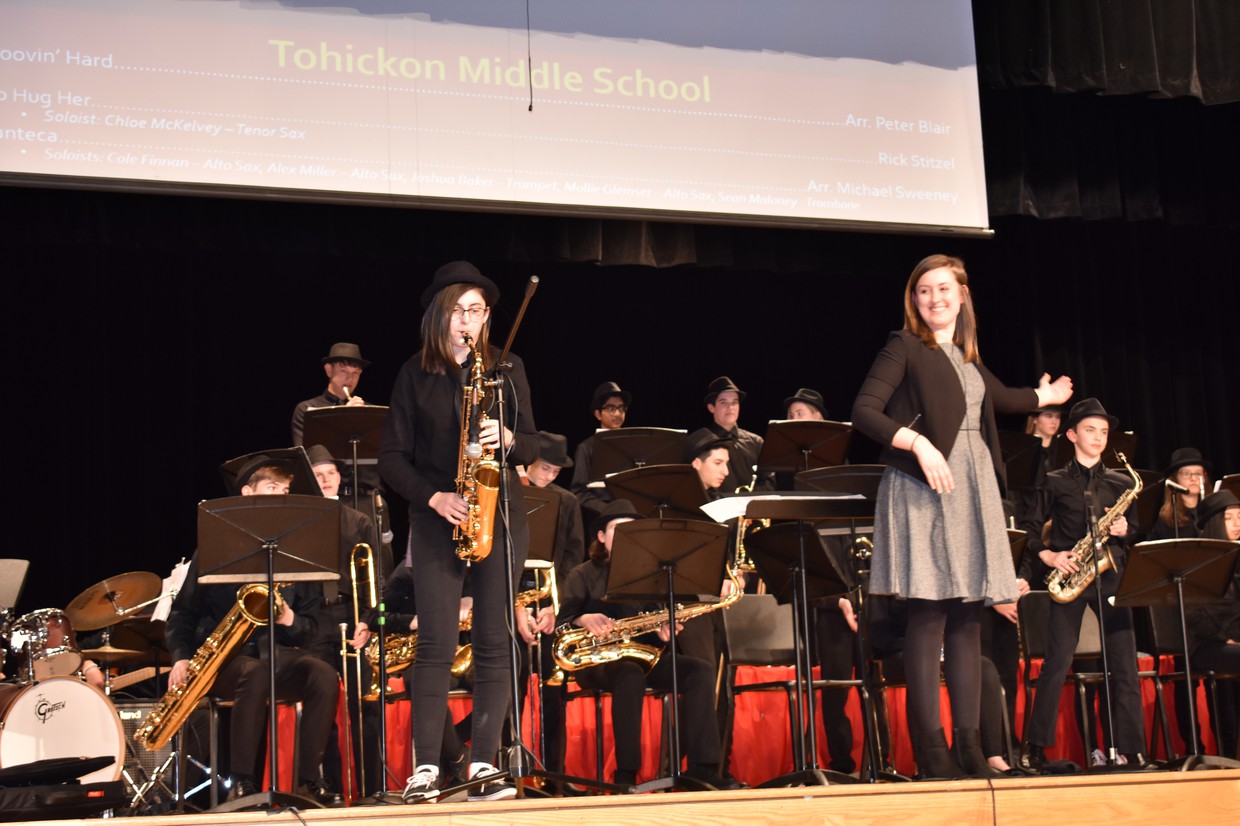 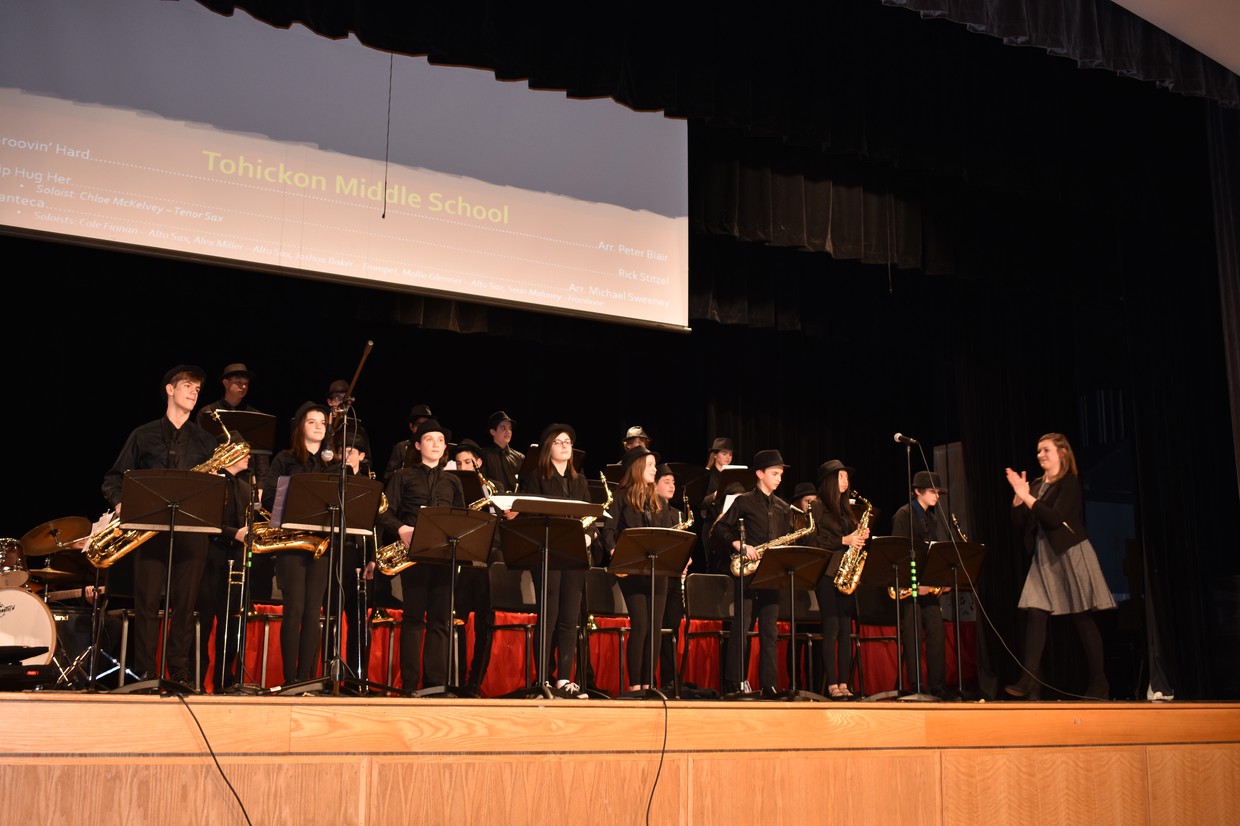 In order for clubs to run, a teacher must be willing to sponsor the club after school and there must be a reasonable level of student interest. For these reasons, Tohickon clubs may be different from year to year. Throughout the year, Tohickon expects to be running the following clubs:

The number of clubs may increase as the year progresses. We will continue to keep you updated in our monthly newsletters, listing all active clubs. If you are interested in joining one of the clubs at Tohickon or have any questions, please see the club's sponsor in order to sign up. 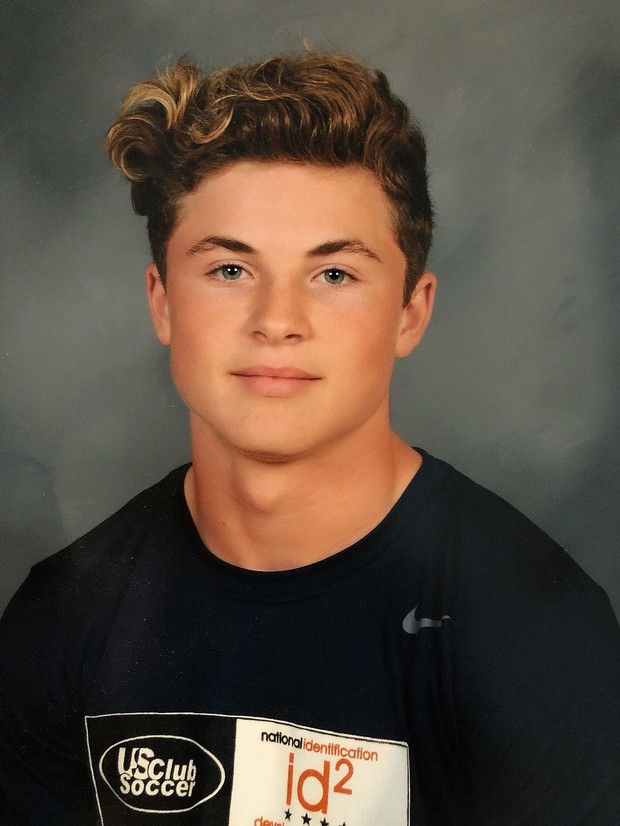 TOHICKON STUDENT IN THE SPOTLIGHT

DOYLESTOWN, PA — A Doylestown teen has been chosen as a member of an elite soccer team that will travel to Europe later this month. Doylestown's Stevie Davis, a member of the Philadelphia Ukrainian Nationals team, has been selected for the US Club Soccer's 2019 id2 National Selection Tour roster.

Davis will join 17 other players born in 2005 to represent the United States in Belgium and France from March 29 to April 9.

The team will play friendly matches against top academy clubs, including Paris Saint-Germain, according to information from US Club Soccer, a member of the U.S. Soccer Federation.

We are looking forward to embarking on another European journey of discovery," McKeown said. "We get to learn a lot about these players while being tested by the world's best. More importantly, the players learn a lot about themselves. Sometimes these experiences can be the catalyst for self belief."

On Sunday, April 14th, 2019, there will be a 5K and 1 Mile Fun Run at Central Bucks East. The purpose of the event is to enable cancer patients and their loved ones to strengthen, deepen, and unify their relationships by creating unforgettable and lasting respite vacations. Use the following link to register or to make a donation: 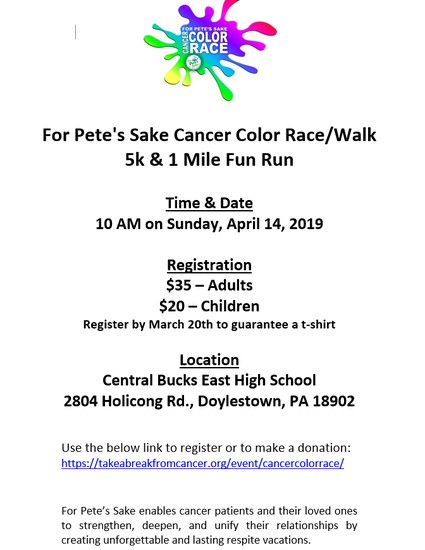 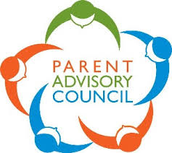 The next Parent Council Meeting will take place on Thursday, April 25 at 9:00 AM in the Tohickon Library.

From the Nurse's Office

The health office has recently seen an increase in cold and allergy related symptoms. Please be reminded to give medication at home, before school, as the nurse’s office does not have allergy medicine to administer to students. Students are also permitted to carry a personal supply of cough drops and encouraged to carry water bottles to remain hydrated in school. This is especially important as the weather gets warmer. Here’s to a healthy spring!