I have always been fascinated with fire. So warm and bright. I love it even though it killed my parents when I was ten months old. They were killed so long ago that I shouldn’t remember them, but I do. I have this old painting of my family which matches my master’s description of them.

I had this painting even before I found out that I was an orphan. I guess I just assumed that the couple standing on each side of my parents were Marshco’s parents and the women holding me was Marshco’s wife. It turned out that he did have a wife but not any children. Even though my whole family was there I always felt like something was missing, like my mother’s or father’s siblings, but as far as Marshco and I know they didn’t have any. My grandparents left this world a few weeks before the fire so I was sent to live with Master Marshco.

“Amelia Jean Faris get your sorry butt up here this minute!” Marshco yelled down the stairs. He yelled so suddenly that I dropped the metal I was working on. The piece of metal narrowly missed my foot. I picked it up and placed it back on the anvil when I saw Nani trying to reach the still glowing metal. I scooped the kitten up and sprinted up the stairs with my gloves and apron still on. “I’m sorry I-” I stopped as I saw the man Marshco was talking to. “Caleb?” I must've sounded surprised because he started to laugh.

“Surprised sweetling?” Caleb teased. Marshco looked extremely confused, I didn’t blame him. If some random person called my daughter, adopted or not, sweetling I would be very confused. I ignored Caleb’s comment. “Caleb! It is you!” I gently tossed Nani along with my gloves on a nearby counter and ran to Caleb. He picked me up and slung me on his shoulder like a sack of potatoes. “Hey! Caleb let me down!” I was laughing so hard tears were making small rivers on my face. Caleb is my childhood friend, we used to hang out every day after school. After Caleb got out of school he left to go who knows where. Two years later when I got out I never saw Caleb again. He put me down and hugged me tightly, his muscular arms making me feel safe. Smiling, I look up at him. He had grown but his brown hair and blue eyes where the same.

Marshco cleared his throat “I hate to break it to you but, can you please state your business and leave so Amy can get back to work? Those swords aren’t gonna forge themselves you know!”

“Well, I’m here because I was sent by Headmaster Merskij and well, why he wants you I cannot say here. Marshco gave him a concerned look. He may be a stern man but he did raise me like I was his own. He and his late wife, Maddie, wanted a child so when I appeared at the door they were saddened by the news of my family but overjoyed that I was placed into their care. “Marshco it’ll be fine, Caleb here will make sure I’m safe whether I like it or not.” I said calmly to him. “Besides I’ll send a message when we get to where we are going.” He relaxed a little bit, but still looked weary. “Hey-uh you might want to take Nani with you.” Marshco looked like he wanted to say something else.

‘“Why? She’s only a kitten and well… Oh never mind.” I wanted to say because of her powers but it was too risky for someone to overhear us, after all we were only in the back of our smithy, during business hours. “Relax I know Nani is a Mag you don’t need to worry. Do you know her form yet?” Marshco’s eyes widened a bit, I placed my hand on his shoulder, “Master, we can trust him.” I turned back to Caleb “No, we haven’t seen her form yet but I have a slight inkling I know what it is.” Caleb nodded. I heard Marshco sigh, “Alright I’ll let Amy go. You have to promise you’ll protect her. If you don’t I’ll personally hunt you down and tear your lungs out.”

I had just finished packing when Caleb came in. “Hey sweetlings.” I shot him an icy glare. “Woah there! I’m sorry yeesh.” I continued to glare at him. “Why are you in my room?” “I just wanted to make sure you're ready to possibly not see Master Marshco for a few years.” I sighed “I think so. I’ve never traveled very far before.” I thought of how I was leaving what I knew behind. “Caleb?”

“Do you know if the rumors about my family’s Villa are true?”

“You mean the ones about people going deaf, mute, and blind? No, none of those are true. It’s all just a fluke.”

“Well, then why make them up if they aren’t true?”

“It keeps the highwaymen away. Although the Phoenix Academy-which is where I am taking you-had put extra precautions on the Villa.” Caleb turned to the door and said, “Love you sweetlings!” before he started to laugh and and walked out. I rolled my eyes. “Some people.”

When I came down the stairs I was shocked to see Marshco on the verge of tears. He never comes close to crying. The last time I saw him cry was when I was five at Maddie’s funeral. I walked over to him and set down my bags. “Mashco it’s going to be alright.” He gave me a big bear hug. “I love you Daddy.” I said into his shoulder.

“I love you too my daughter.” He hugged me a little longer then pulled away, tears still glistening in his eyes but of happiness and relief instead of sadness and loneliness.

Caleb cleared his throat, “We should leave soon, the horses are getting a bit restless.”

“Alright. Nani, are you ready?” I looked around for a white kitten when I felt a tug on the bottom of my pants. I looked down and saw almost an exact replica of me staring up at my face. Nani was a small girl around five years old. Her green eyes, the same shade as mine and the faint pink lips all identical to mine. The one difference was her hair, instead of being fiery red her hair lacked color. Her snow white hair was done up in some intricate knot that I would never be able to do in a million years. “Hi Mommy!” Caleb smiled at Nani. “Me and Naomi will meet you outside.”

As Caleb and Nani walked outside I grabbed my bags and was about to leave when Marshco put his hand on my shoulder. “Here take this.” He pressed the hilt of a knife in my hand. The blade was clear, almost like glass. It had a simple brown binding with a red stone in the pommel “Wow,” I breathed “Is it made of glass?”

“I-I’m not sure. I don’t recall ever inscribing anything on it.”

“No matter it’s beautiful.” Marshco handed me a sheath made of dyed doeskin, a similar stone to the one on the dagger was embedded in the sheath and strapped it onto my belt hiding it in the folds of my traveling cloak. 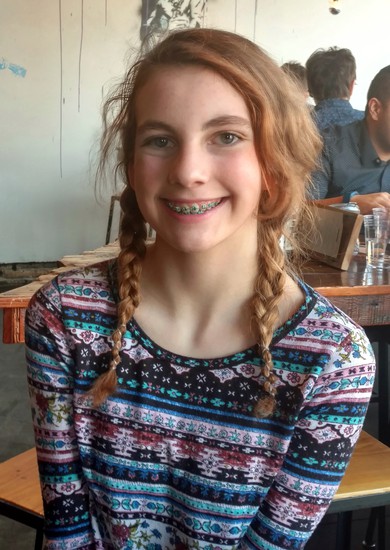 Ella started to write stories when she found out that her favorite author, Christopher Paolini of the Inheritance Cycle, started to write his first book when he was fifteen. Inspired, Ella was determined to write her own books. Just last year Ella joined a writing group to get feedback and giggles on her work. Ella also enjoys dance, playing her violin, reading, baking, and most of all, spending time with her close friends. Ella's goal is to publish her first book by fifteen and to become an author. Ella is shy when it comes to new people but, once you get to know her she's outgoing and loud (in the very best way possible.) Ella lives with her mom, dad and older brother in a log cabin home. Ella has three cats, fifteen chickens, one dog and an occasional yard bunny.
Click to Return to Home Page