Get email updates from Elena:

Much of this week's brief is based on the thanks we give within our school community on an ongoing basis.

We begin with student achievements, both academic and athletic, as we concentrate our efforts toward whole-child education. It is gratifying to see our students embrace opportunities toward their futures, and then to be recognized, both nationally and through higher education institutions as being part of and elite group of up-and-coming leaders. This past week's NHS inductees and athletic signers show that they are on the right path.

Beyond that, you will read about a teacher who raised nearly $10,000 for ovarian cancer research in honor of people he is grateful for having in his life.

Our students, always ready to celebrate our veterans and servicemen, pulled off incredible feats of charity, along with an outpouring of gratitude in observance of Veteran's Day. The West Seneca West Football team raised $12,000 for P.U.N.T. pediatric cancer care, and were rewarded for their efforts with a meet & greet with Buffalo Bills tight end Dawson Knox.

We also gave thanks to our school bus drivers and substitute teachers, who all uphold the ever important continuity of learning for our students. And a big thank you also to our Buildings and Grounds Department or all of their work this week, clearing out the snow!

At this time, I wish everyone a warm, safe and happy Thanksgiving as we emerge from an historic snowfall. West Seneca is the city of caring, giving people, and for that, I am grateful!

West Senior's National Honor Society induction ceremony took place on November 16th in West Senior's auditorium. The ceremony, conducted in most part by present NHS members, was absolutely lovely. Each student was introduced by their school averages, activities, leadership positions in various clubs, and their places of employment. It is amazing how many important endeavors these high-achievers pack into their days! Principal John "Jay" Brinker lauded the students for being the "best students of the best state school system in the nation."

The new inductees (pictured below) are as follows:

It's always a great day when our scholar/athletes get scooped up by colleges who see their achievements and want them on board! 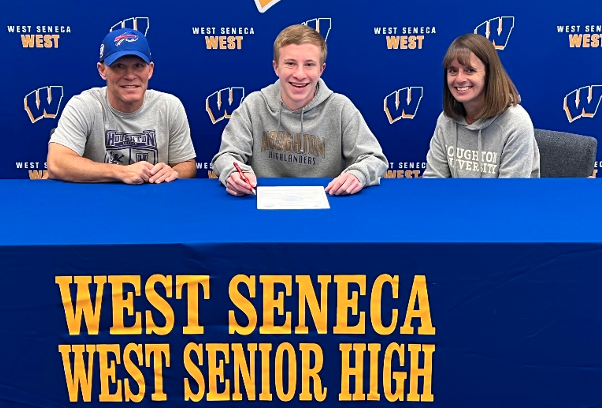 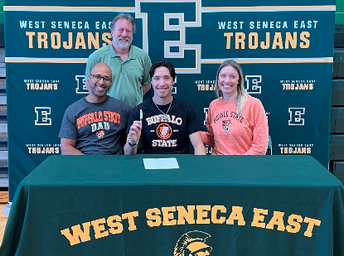 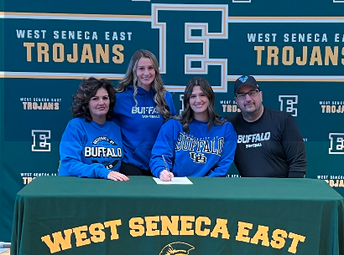 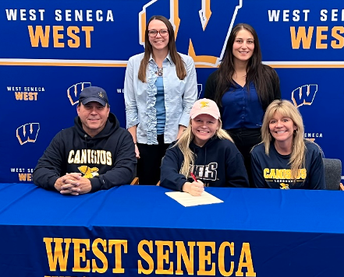 On Sunday, November 6th, West Senior Social Studies teacher Richard Joslyn ran in the NYC Marathon to raise awareness about ovarian cancer. This rare disease has tragically impacted three of Joslyn's close family members in less than four years - an aunt and mother-in-law succumbed to the often silent and fatal disease while his mother is thankfully in remission at this time.

Speaking for himself and his wife Molly, Joslyn says, "We would like to do everything we can to prevent other women and their families from going through this experience as it is evident that the signs and symptoms of ovarian cancer are often undetected. This year, I ran the 2022 TCS New York City Marathon to raise awareness and funding for the National Ovarian Cancer Coalition (NOCC) in honor of my mom, mother-in-law, and aunt. I would especially like for my two young daughters to grow up in a world where there is improved diagnosis, treatment, and support of those with the disease that has afflicted both of their grandmothers."

Joslyn would like to thank the many members of the West Seneca Schools community who made contributions to support such a meaningful cause. All together, they helped him and his wife raise nearly $10,000. Colleague Keith Ersing says, "Rich has been a teacher here for over 20 years and I am always impressed by his dedication to his students and our community." In fact, it was Ersing who alerted us to Joslyn's plight turned fundraising feat.

Rich had one request in allowing us to tell his story, and that was to share the following with all who read it. Kudos for your efforts, Rich. Thank you for helping us to spread the word.

Please consider making a donation to the National Ovarian Cancer Coalition. Dollars raised for the NOCC support national programs and local market initiatives to heighten awareness of the subtle signs and symptoms of ovarian cancer, assist newly-diagnosed patients throughout the country, provide ongoing support to caregivers, and advocate for the advancement of ovarian cancer research.

This fall the West Seneca West Football team joined other football teams across WNY in a fundraising and character development program, standing behind local families who are facing a pediatric cancer diagnosis. West's student-athletes seized the opportunity to be game changers in our community for kids with cancer.

This season the West Seneca West Football team raised $12,000 for P.U.N.T. One student, Justin Passucci raised the most for a single athlete, $1,970 through 9 donors! On November 16, the team was rewarded for their efforts with a meet & greet with Buffalo Bills tight end Dawson Knox.

The P.U.N.T. Pediatric Cancer Collaborative is an essential nonprofit organization that provides families in WNY facing pediatric cancer with critical programs that offer financial, practical, and emotional support from diagnosis to recovery and even bereavement.

P.U.N.T. operates with collaboration and guidance from community hospital partners to ensure that every dollar gets channeled to where it is most needed. 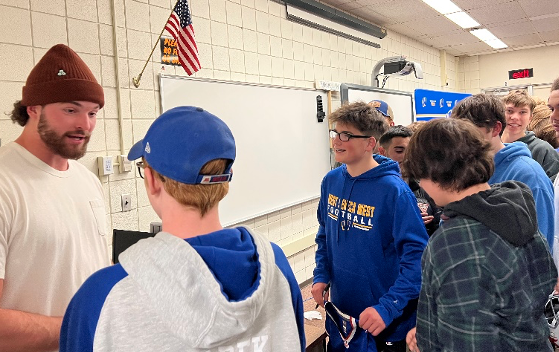 The Capstone Experience students in Mrs. Lutman & Mr. Papke's classes have been working alongside students in Mrs. Bonuito & Miss Jankowiak's classes on a kindness T-shirt project. The students collaborated to come up with positive quotes/pictures that they would want on a T-shirt. With guidance from Mrs. Leahy, the students designed and produced their kindness shirts using the cricut machine & press. As shirts are finished, students have been able to wear them to school to help promote positivity on "Kindness Wednesdays" at East Middle. 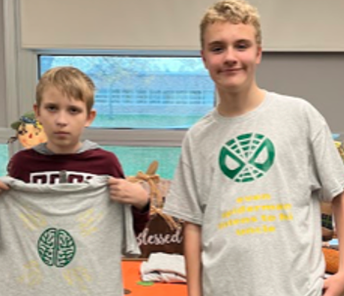 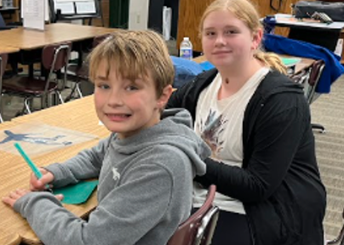 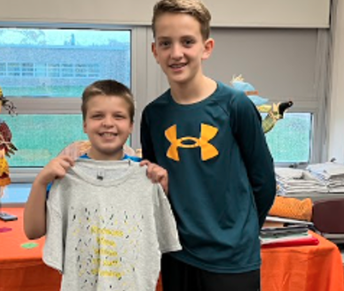 Students at West Seneca East took a few moments to help honor some of our oldest veterans today. Pictured here (l to r), Cooper Yeomean, Aiden Summers, and Nathan Riley helped make beautiful buttons using materials from their library's makerspace. These will be handed out to residents at the GreenFields Continuing Care Community in Lancaster, NY, as a small gesture of our thanks for their service to our nation. 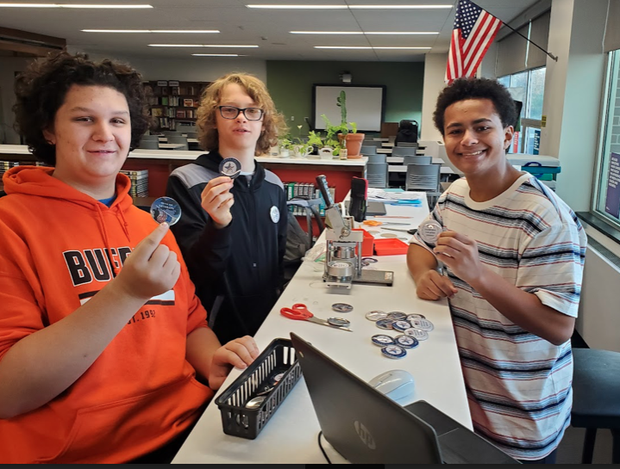 Northwood Gives Thanks to Vets

Northwood K to 5 Students made notes, cards, posters and stories to thank and honor our veterans.

They will be delivered to K.I.A ( a local agency that supports and serves local veterans and their families) and sent to the VA from there. 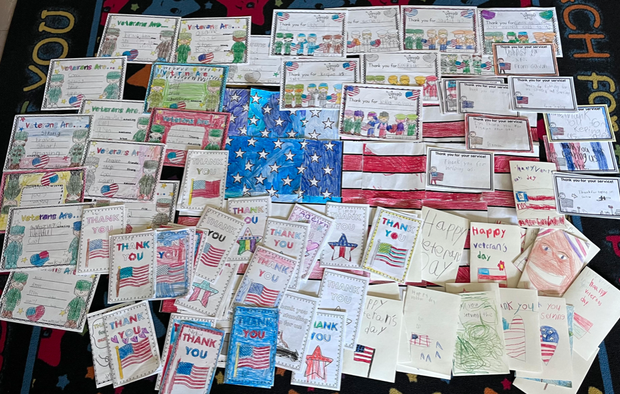 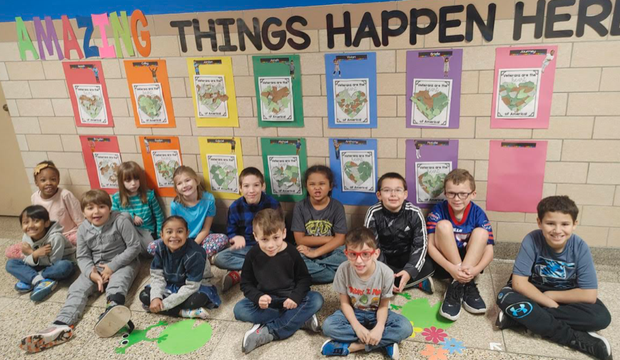 Winchester Potter's Nod to the US Navy

All of the students in third grade wrote thank you notes to the sailors on the USS James E.

Williams Destroyer. Mrs. Mack’s nephew will deliver them to the ship when he reports for his

deployment this week. The students wrote jokes and riddles in each letter to bring smiles to the men and women of the United States Navy! 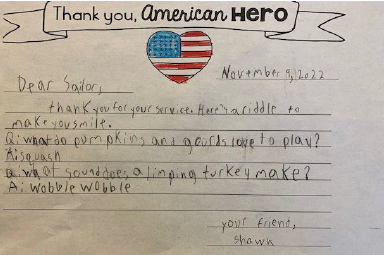 Music for Our Veterans from WSW

On Friday, November 11, West Senior band director John Blickwedehl and members of the WSW Wind Ensemble performed for the Veteran's Day Celebration at the YMCA on Southwestern Blvd.

About 20 members performed The Star Spangled Banner, a US Armed Forces Medley, and other music for Southtowns YMCA members during our annual Veteran's Day Celebration. YMCA staff and members were delighted to hear these young musicians play. Many expressed much gratitude for their presence there. 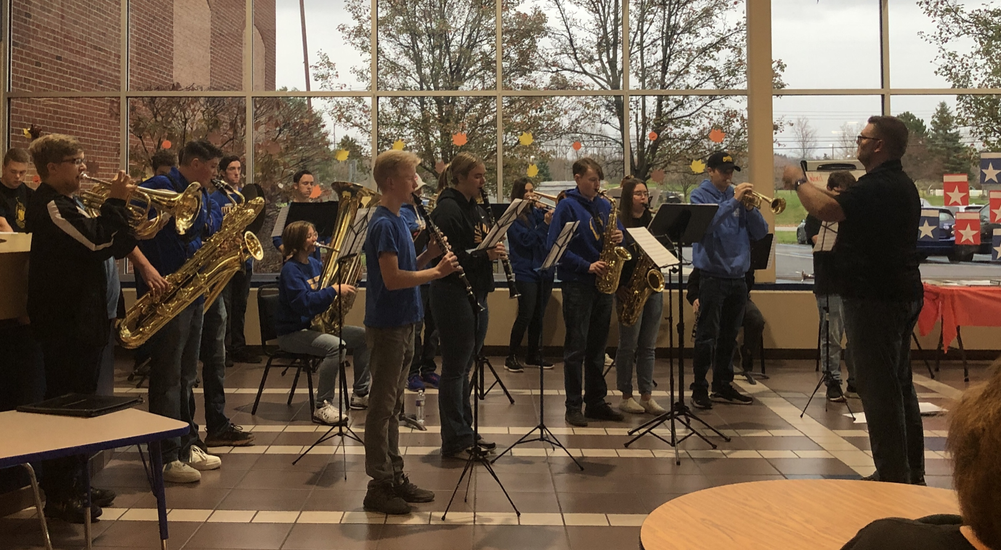 Here's to two groups of individuals who help make our world go 'round in the WSCSD! We hadn't planned days off for them during this week, but Mother Nature presides!

Thank you, Bus Drivers and Substitute Teachers, for all you do each and every day for our children. You get them to school and back home safely, and uphold their continuity of learning. Kudos! 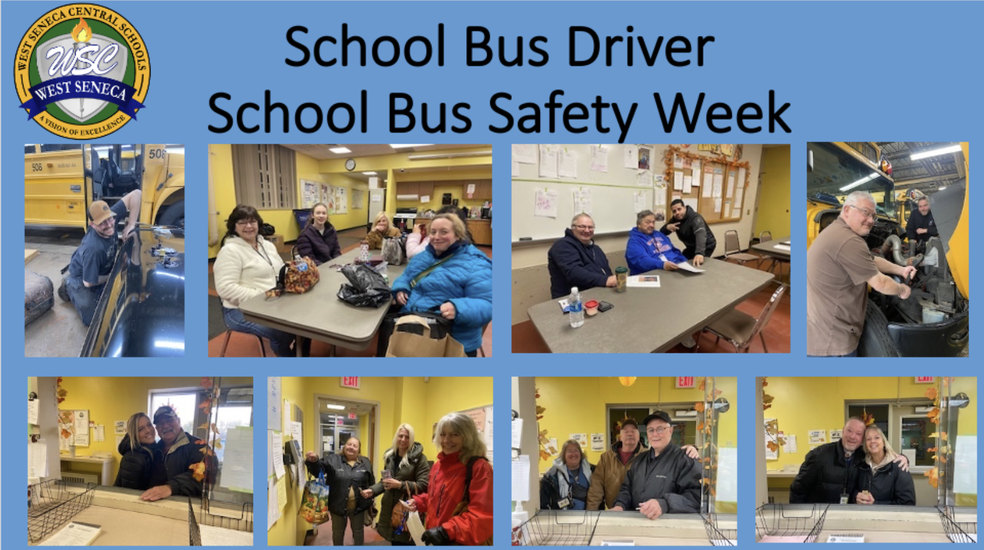 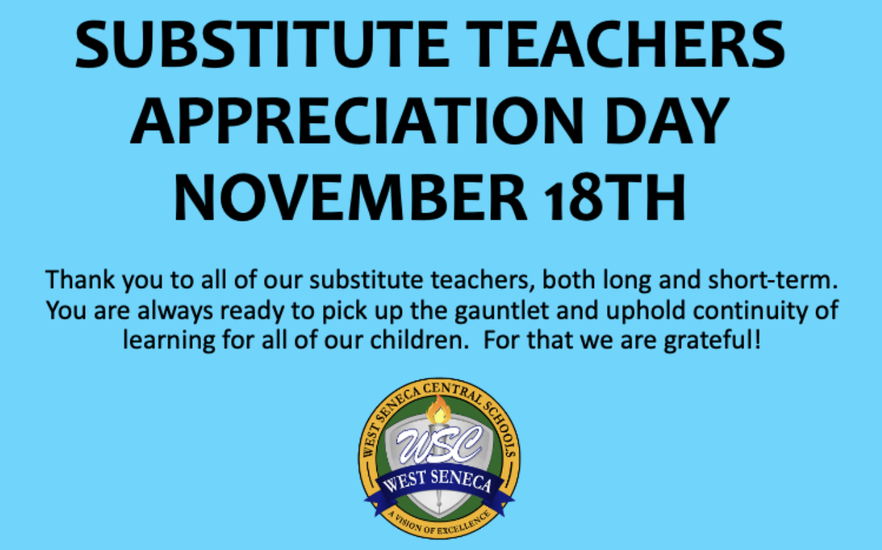 Follow Elena Cala
Contact Elena Cala
Embed code is for website/blog and not email. To embed your newsletter in a Mass Notification System, click HERE to see how or reach out to support@smore.com
close