Get email updates from monkey: 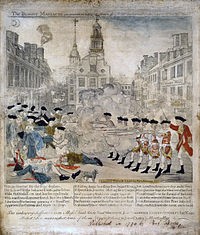 March 5, 1770. British army fired at an unarmed crowed. civilians threw snowballs at the British, British accidentally fired at the crowed without orders 3 insistently died then 2 other died of horrible wounds, 6 other were injurer. the next day 8 soldier, 1 officer, and 3 civilians were arrested and charged with murder.

Our rights and grievances

The Declaration of Rights and Grievances was a document written by the Stamp Act Congress and passed on October 19, 1765. It declared that taxes imposed on British colonists without their formal consent were unconstitutional.

What's unalienable cannot be taken away or denied. Its most famous use is in the Declaration of Independence, which says people have unalienable rights of life, liberty, and the pursuit of happiness.