Mercedes is using Smore newsletters to spread the word online.

Get email updates from Mercedes:

For centuries, the root causes of hunger have remained hidden underneath the soil. In 1912, however, a small band of psychologists (Cannon and Washburn) theorized that the pangs of the stomach may be signaling this physiological phenomena within one’s body. The purpose of their experiment was to test this notion, discover more about the feelings of hunger, and uncover any previously unknown correlations or relationships, as well.

Washburn agreed to swallow a small balloon attached to a recording device; when inflated to fill his stomach, it transmitted contractions. He depicted his experiences of hunger by pressing a key each time he felt a hunger pang. Overall, it was concluded that an individual has stomach contractions whenever he feels hungry (it is correlational, no causational). The pangs of an empty stomach are not the only source of hunger.

This investigation may be applied to the residents of District 12, as they can learn to associate the pangs of their stomach with their feelings of dire hunger or thirst. It may also allow them to recognize that there are other indications of this occurrence apart from the occasional rumble (that should not be ignored). Hence, the may be able to more effectively aid themselves.

The proper term in psychology, or most sciences, for “blood sugar” is glucose. Glucose can be more thoroughly defined as the form of sugar that circulates in the blood and provides a major source of energy for body tissues. When its level is low, one experiences the displeasure of hunger. One may also be led into obesity, overeating, and so on as they are not able to feel satisfied. In stark contrast, high levels inhibit eating and hunger (induce starvation).

When insulin is not secreted, the blood sugar levels of an individual will be quite high. Hence, one will not wish to eat very much.

If a great amount insulin is secreted, one's blood sugar will remain relatively low. Hence, they will wish to eat more. 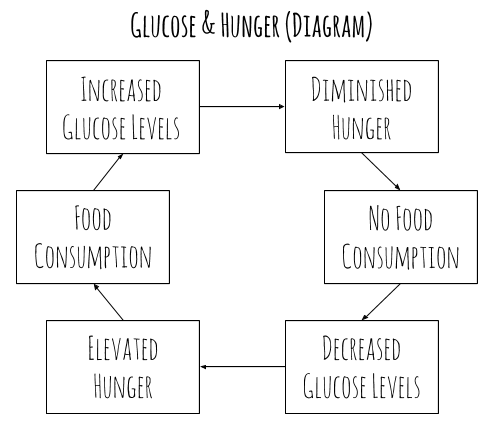 The hypothalamus is a constituent of the brain, and is known for maintenance activities (e.g. regulating food consumption, drinking capacities, and body temperature) and for governing the endocrine system via the pituitary gland (linked to emotion). It is located below the thalamus and also pertains to the limbic system. In the terminology of neuroanatomy, it forms the ventral part of the diencephalon. The ventromedial section is located more towards the front of the brain, and causes one to stop consuming food, when stimulated. Lesions of this area may also induce overeating. The lateral hypothalamus controls hunger; damaged to this area can lead to reduced food intake, presumably through loss of appetite, and stimulation can increase it. Studies indicate that it influences glucose metabolism, and through the body’s inclination towards homeostasis, it can increase or decrease blood sugar levels. 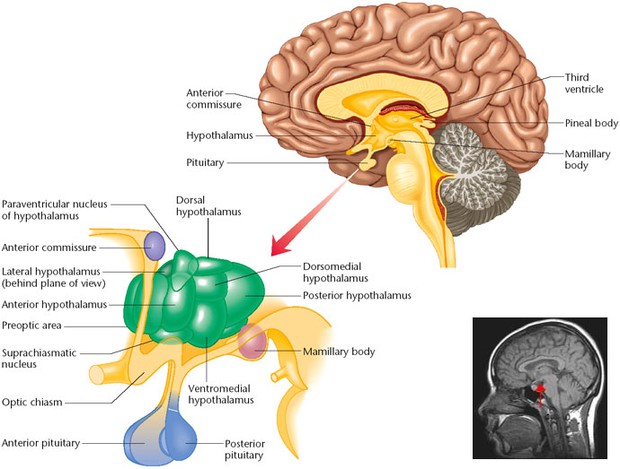 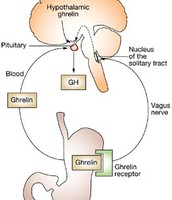 The interaction of brain activity and appetite hormones suggests that the body has a “weight thermostat.” When famined rats lose weight that is under that of their normal or regular state, the system signals the body to restore the lost weight. The rats’ hunger increases, whereas their energy output decreases. In stark contrast, when body weight rises (e.g. force feeding), hunger decreases and energy expenditure increases. Hence, rats hover around a set point (the point at which an individual’s “weight thermostat” is supposedly set). All of this correlates to the organism’s basal metabolic rate, or the body’s resting rate of energy expenditure. In 1983, this experiment with the rats was conducted, and its results are needed in order to comprehend with a few diet regimens (common in today’s world) may not be successful. 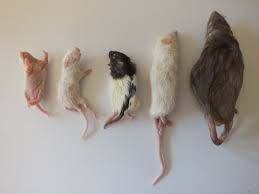 The basal metabolic rate (BMR) is defined as the body’s rate of energy expenditure. It may be discovered in a neutrally temperate environment, in the postabsorptive state (meaning that the digestive system is essentially inactive, which requires about twelve hours of fasting). If one does not consume enough food, their BMR will decline sharply, resulting in one’s quicker or more full absorption of smaller amounts of food. In other words, one may gain around three-quarters of the weight they previously lost back after eating only half of the calories they had before (per meal or daily). Weight gain is very subjective (this phenomena affects it, and is different for every person). Overall, it can be inferred that if an individual expends more energy, the hungrier he or she will be. 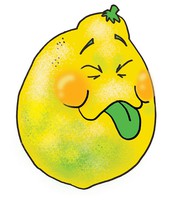 In the year 2017, there was a bewildering reformation of health regimens in the United States.

In the year 2016, the health regimen of those who lived in the most developed or heavily industrialized countries was reformed. Prior to this event, 1.5 billion adults carried the heavy weight of obesity (as well as the disease’s complications) on their shoulders. Around 65% of the world population also lived in a country in which more people were likely to die to their overweight bodies rather than malnutrition. Yet, not to long ago the words anorexia nervosa and bulimia nervosa became other pinnacles of the nutrition or health world. Anorexia nervosa is an eating disorder in which there is a purposeful loss or lack of appetite (in a gross conquest for a skinnier, more “ideal” body). Bulimia nervosa is another eating disorders involving the distortion of one’s body image, in which an individual is succumbed to a life of depression, as well as self-induced vomiting, purging, and/or fasting.

The drive-reduction theory explores how physiological needs create aroused tension states (drives) that direct us to satisfy those needs. For example, an individual's need is water, his thirst is the drive, and the drive-reducing action is drinking it. This notion is based on the inner-workings of homeostasis, or an organism’s need to balance their physiological, mental, and any other state (in general).

The physiological aim, as stated, is to reach homeostasis (see below). 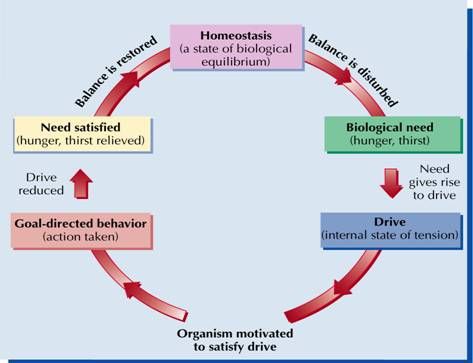 The Hierarchy of Needs

The hierarchy of needs is Maslow’s pyramid of human needs, beginning at the base with physiological needs that must be first satisfied before higher-level needs and then psychological needs become active. 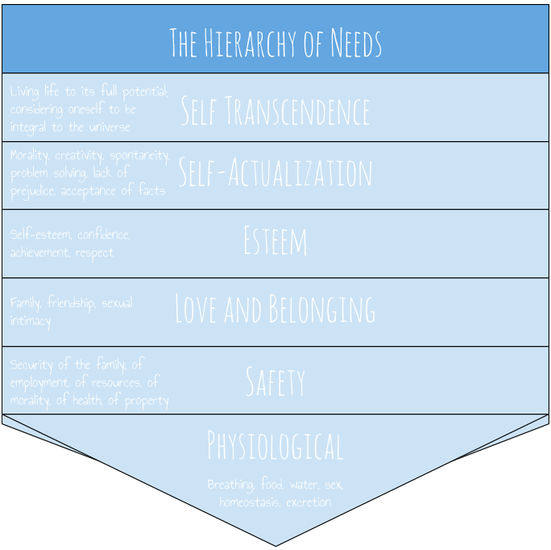 The Yerkes-Dodson Law is the principle that performance increases with arousal only up to a point, beyond which performance decreases. Also, the optimal arousal theory suggests that humans are motivated to maintain a suitable level of arousal; it helps to explain the other psychological ruling. These two theories are illustrated graphically as a bell-shaped curve, which increases or decreases in accordance to varying levels of arousal. 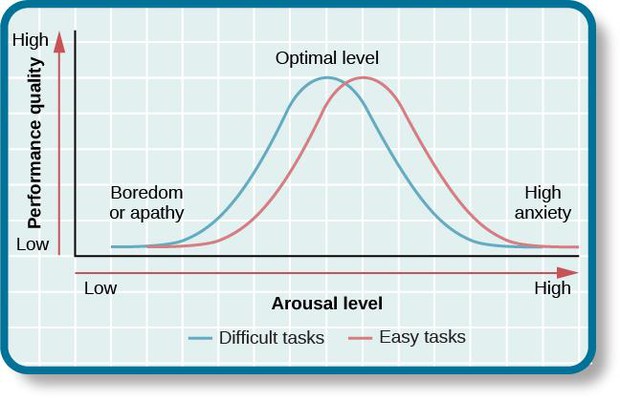 Mercedes is using Smore newsletters to spread the word online.