Get email updates from Luis:

"Be careful who you call your friends. I’d rather have four quarters than one hundred pennies.” 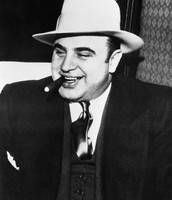 "Don't mistake my kindness for weakness. I am kind to everyone, but when someone is unkind to me, weak is not what you are going to remember about me.” 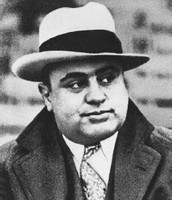 Alphonse Gabriel "Al" Capone was an American gangster who attained fame during the Prohibition era. He earned 60 million dollars annually selling liquor. Some even considered him a kind of Robin Hood figure.

He is also know for ST.valentine day massacre,On February 14, 1929, posing as police, McGurn’s gunmen assassinated seven of Moran’s men in cold blood in a North Side garage.

Because of the valentine day massacre, qHerbert Hoover ordered the federal government to step up its efforts to get Capone on income-tax evasion. The Supreme Court had ruled in 1927 that income gained on illegal activities was taxable, which gave the government a strong case for prosecuting Capone. On June 5, 1931 the U.S. government finally indicted Capone on 22 counts of income-tax evasion.