Jennifer Aniston was born in Sherman Oaks, California, on February 11,1969. Her parents were both actors and encouraged her high school intrest in drama. She had a few minor roles before landing one on the NBC sitcom "Friends" as Rachel Green. The hugely popular series made her a star. Since its conclusion in 2004, she has been in several film, including "The Break-up" with Vince Vaughn.

Jennifer Joanna Aniston was the daughter of a soap opera star John Aniston and actress Nancy Dew. Aniston began appearing in stage productions in the late 1980's. She attended Fiorello H. Lagaurdia high school of Music & Art and perfroming arts where she was active in drama. 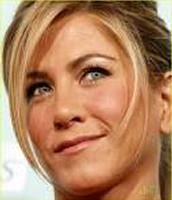 After several minor film and television roles, Jennifer hit Hollywood gold by playing Rachel Green on the hit NBC sitcom "Friends". "Friends" was a huge sucess on the show as the "Rachel". She stayed with "Friends" for 10 years, banking $1 million per episode for the last three seasons, until the show ended in 2004. She won both a Golden Globe and on Emmy Award during her tenture on the show.

Jennifer has also nurtured a big-screen career, often alternating between small, independent films like "Office Space" and 2002's "The Good Girl" and big budget productions like "Bruce Almighty". She also starred in "Marley and Me" with Owen Wilson in 2008. It set a record for the largest Christmas day box office. Aniston has continued to keep steady work in her typical genre of romantic comedies or simple comedies. In 2011 Colin Farrell, and John Sudekis.

Some more information on Jennifer Aniston

Jennifer Aniston married Brad Pitt in 2000. The A-list couple divoreced in 2005 following media speculation that Pitt was having an affair with Angelina Jolie. Jennifer has since been linked with Vince Vaughn, John Mayer and Jason Sudekis. In August 2012, Jennifer announced her engagement to American actor and director, Justin Theroux. Aniston and Theroux met while filming "Wonderlust". It was reported that in 2013 that Aniston and Theroux and postponded their wedding plans due to a difference in location preferences. While Aniston wants to live in Los Angeles, Theroux wants to live in New York City. 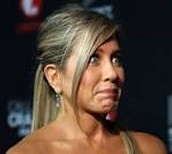