Who Was Marco Polo?

Who Was Marco Polo?

Marco Polo was a merchant from Venice and also an explorer. He always recorded his travels in a book called 'Livres des merveilles du monde' which was then published. Because of his book he introduced Europeans to China and central Asia. People say that when he got back to Italy, he brought the first taste of Asian culture to Europe. He had 3 children called: Moretta Polo, Fantina Polo and Bellela Polo. He was born September 1254 and died January 1324 at the age of 70. His father and Uncle were both jewel merchants.

Kublai Khan the mongol ruler of China asked Marco's Dad and Uncle to return to Europe and persuade the Pope to send scholars to explain Christianity to him. They got back to Venice in 1269 and they reached Khan's summer court in 1275 and ended up living on the land for the next 17 years. The reason why they stayed in China for so long was because Kublai Khan wanted them as his advisors and so he didn't let them leave for 17 years!

When he, his Uncle and Father got back to Venice they brought back loads of goods that had never been seen before such as silk and tea. He is now buried in the church of San Lorenzo, in Venice. 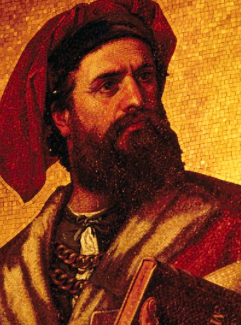