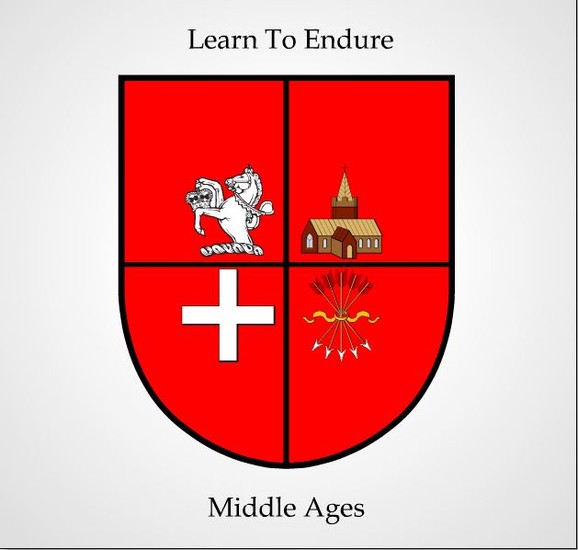 The 4 levels of the feudal system (top to bottom) : King,Lords and Nobles, Knights, Peasants

King- Owned all the land in the country and made the laws. He gave an area of land called a fief to rich lords and nobles.

Lords and Nobles- In return of the land they were granted from the king, the lords and nobles agreed to supply the king with soldiers and horses for his army. The nobles gave some land to proffesional soldiers.

Knights- In return of the protection, food, and shelter, the knights faught for nobles and the king.

Peasants- They farmed and worked the land of the nobles and knights who in return offered them food, shelter, and protection.

Advanced Weapons of the Middle Ages 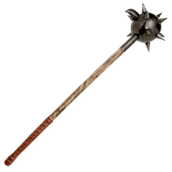 This was the basic weapon of a knight and it was very popular in the early middle ages because it was easy to build, often it was made of wood with no metal or with spikes sticking out of the head. It was used to deliver massive blows to the enemy.

The bow and arrow developed in the early middle ages. The medieval archers were considered the lowest of all fighting men. They were perceived as untrained peasants. The bow and arrow was used because they needed a weapon that could eliminate the enemy from farther away. 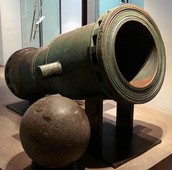 A bombard is a large calibre, muzzle-loading medieval cannon, for throwing heavy stone balls. Bombards were usually used during sieges to hurl various forms of missile into enemy fortifications. A notable example of a bombard is the large Mons Meg weapon, built around 1449 and used by King James II of Scotland. It was very powerful used for bringing down castle walls.

The Life of a Soldier and a Knight

Knights- For a noble's son to become a knight, he first had to become a page at the age of seven. He would learn to crave meat, serve meals, and run errands in his father's liege lord's castle (a liege lord was a lord who was entitled to allegiance and service). Then, at age fourteen, the page would become a squire. He learned to ride a horse, hunt, wrestle, and use weapons. He would also have to clean the lord's armor, look after the horses, and follow the lord into battle. If he proved his skills by the time he was between 18 and 21, the squire would become a knight.Knights usually fought for the king 40 days a year(the rest of the time they practiced their skills and participated in tournaments - jousting was one of the most famous sports). They wore armor of chain mail and iron plates; the horses they rode on were called destriers.

Soldiers- there were several kinds of soldiers: foot soldiers, archers, pikemen, and, of course, the knights. Foot soldiers, as in the name, fought on foot using swords, spears, axes, and daggers. Archers were positioned in the back and used longbows and crossbows to fire arrows overhead towards the opposing side. Pikemen held long spear-like weapons called pikes to form a protecting wall of menacing points.

The Roman Catholic Church was the only church at this time. It basically controlled who went to Heaven or Hell so it had a lot of power of people's lives. The church hierarchy (most power to least power) Pope, Cardinal, Archbishop, Bishop, Priest, and Deacon. As popes worked to increase their power, they often came into conflict with kings. The popes argued that they were the only people that could choose religous officials. The verse between the kings and popes was practically the fight over choosing bishops and abbots for the countries. Peasants worked for free on the church land. They paid 10 percent of their yearly income to the church. As peasants had little money they often paid in seeds, harvest grain, or animals.

Cause and Effects of the Crusades

THE BLACK PLAGUE IS NEARBY

Things you need to know about the Black Plague:

Causes- Plague is an infectious disease caused by bacteria called Yersinia pestis. These bacteria are found mainly in rodents, particularly rats, and in the fleas that feed on them.

Symptoms- plague affects the lymph nodes (another part of the lymph system). Within 3 to 7 days of exposure to plague bacteria, you will develop flu-like symptoms such as fever, headache, chills, weakness, and swollen, tender lymph glands.

Transmission- Usually, you get plague from the bite of an infected flea or rodent. In rare cases, Y. pestis bacteria, from a piece of contaminated clothing or other material used by a person with plague, enter the body through an opening in the skin.

I am a peasant in the Middle Ages and I want to tell you about my every day life living as a peasant. Us peasants are at the bottom of the feudal system so our lifestyle is extremely hard and harsh. I work as a farmer in the field owned by a lord. I also have to work on church land while getting no pay. This makes me mad because I could be spending time working on my own land. I have to payy rent for the land to the lord that owns it, but I also have to pay taxes called "tithes" which is 10% of my yearly earnings. Since I am a peasant 10% is a lot so most of the time I pay in seeds or grain, etc. to maintain my family. Overall, the life I have as a peasant in the Middle Ages is very harsh and extremely hard.