In the United States, Medicare is a national social insurance program, administered by the U.S Federal Government since 1966, that guarantees access to health insurance for Americans aged 65 and older who have worked and paid into the system, and younger people with disabilities as well as people with end age renial disease (Medicare.gov, 2012) and persons with amyothropic lateral sclerosis. As a social insurance program, Medicare spreads the financial risk associated with illness across society to protect everyone, and thus has a somewhat different social role from for-profit private insurers, which manage their risk portfolio by adjusting their pricing according to perceived risk. 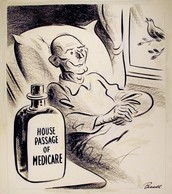 In 1965, under the leadership of President Johnson, Congress created Medicare under Title XVIII of the Social Security Act to provide health insurance to people age 65 and older, regardless of income or medical history. Before Medicare's creation, approximately 65% of those over 65 had health insurance, with coverage often unavailable or unaffordable to the rest, because older adults paid more than three times as much for health insurance as younger people. Medicare spurred the racial integration of thousands of waiting rooms, hospital floors, and physican practices by making payments to health care providers conditional on desegregation