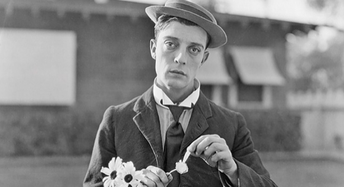 Thank you to all of the many guests and members who attended our April Membership meeting at the BBP Library. It was a great turnout and a wonderful informative lecture on Shipwrecks of Long Island, given by historian Bill Blyer. Here is the information for our next meeting:

Join us at our next general membership meeting at the new Bayport-Blue Point Library on Sunday, May 22 at 2 o’clock. J.K. Hodge, a local film composer, will present an entire movie theater exhibit he has on loan from the Suffolk County Museum. This exhibit covers almost all the theaters that were on Long Island. As we’ll see, the history of film has proven to be a fascinatingly rich and complex field of interest. J.K. will take us through the shifting roles and multiple effects of cinema that took place here on Long Island. Mr. Hodge will also be accompanying a silent film starring the great Buster Keaton (photo above).

John Kenneth Hodge was born in Bayshore and raised in Bayport, Long Island. He was originally musically inspired by his grandfather, who was a theater house pianist during the silent film era. Mr. Hodge has been providing original scores and discussing the history of music and film for the last decade. “Music and film history was once a novelty, but has become my passion to see the role Long Island played in it.”

We hope to see you there! 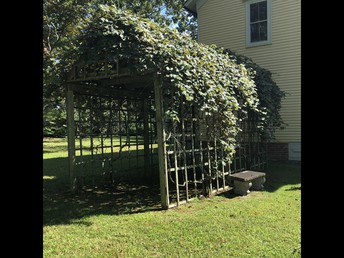 Last month we reported that a bad wind storm (and rot) took down the grape arbor that stood behind the Meadow Croft Estate. Plans are under way for Boy Scout Jack Stafford to complete his Eagle Scout project by building a new arbor. The work should start in a few weeks as fundraising is currently under way. Thank you in advance Jack for your dedication to the BBPHA and local history! Thank you!

You can also make a payment directly from our web-page which can be found here . Just scroll down to the membership section on the home page. Any questions can be directed to bbphistorical@gmail.com. All membership fees go toward the upkeep and restoration of the Meadow Croft Estate. Thank you to all of our generous members! New members welcome! 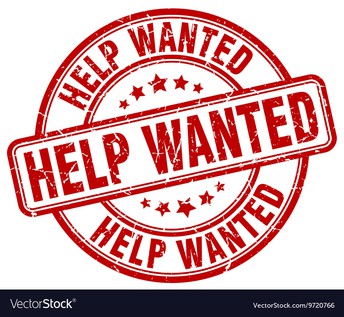 Auto Mechanic: Calling all antique auto mechanics! We are hoping to form an Auto Barn Committee to work on the 1916 Maxwell that Gene Horton donated to BBPHA. The goal of this committee is to make sure that the Maxwell is kept in great shape so that we can get it back on the road under its own power again. Another goal is to keep the Auto Barn clean and organized so that it can be featured on tours of Meadow Croft. If you have knowledge of antique automobiles and would like to help, please email me at DennisHFagan@gmail.com.

Docents: The BBPHA is always looking for people interested in local history who would like to volunteer their time for tours of the Meadow Croft Estate. Docents are trained and can choose the dates they would like to give tours. Meadow Croft is open on weekends from 2:00-4:00 starting in June and ending in October. If you would like more information or are interested, please email us at bbphistorical@gmail.com.

House Tour: We are looking for homes in the Bayport or Blue Point area for our Historical Autumn House Tour event. This event is planning to be held on October 23, 2022 BUT WE NEED YOU! We need you to volunteer your home, so if you have a historically significant, architecturally unique, or interesting home, please let us know. We would love to bring back this event but we need you. Please email us at bbphistorical@gmail.com if you are interested or would like more information.

On April 3rd, a large group of dedicated volunteers came to Meadow Croft to participate in a clean-up and rescue some farm equipment buried in the woods. Led by James Bertsch, members of the Sayville Football team, plus BBPHA members and friends, came ready and willing to roll-up their sleeves and get to work.

The BBPHA sincerely thanks everyone for all of the hard work to keep our local history alive! 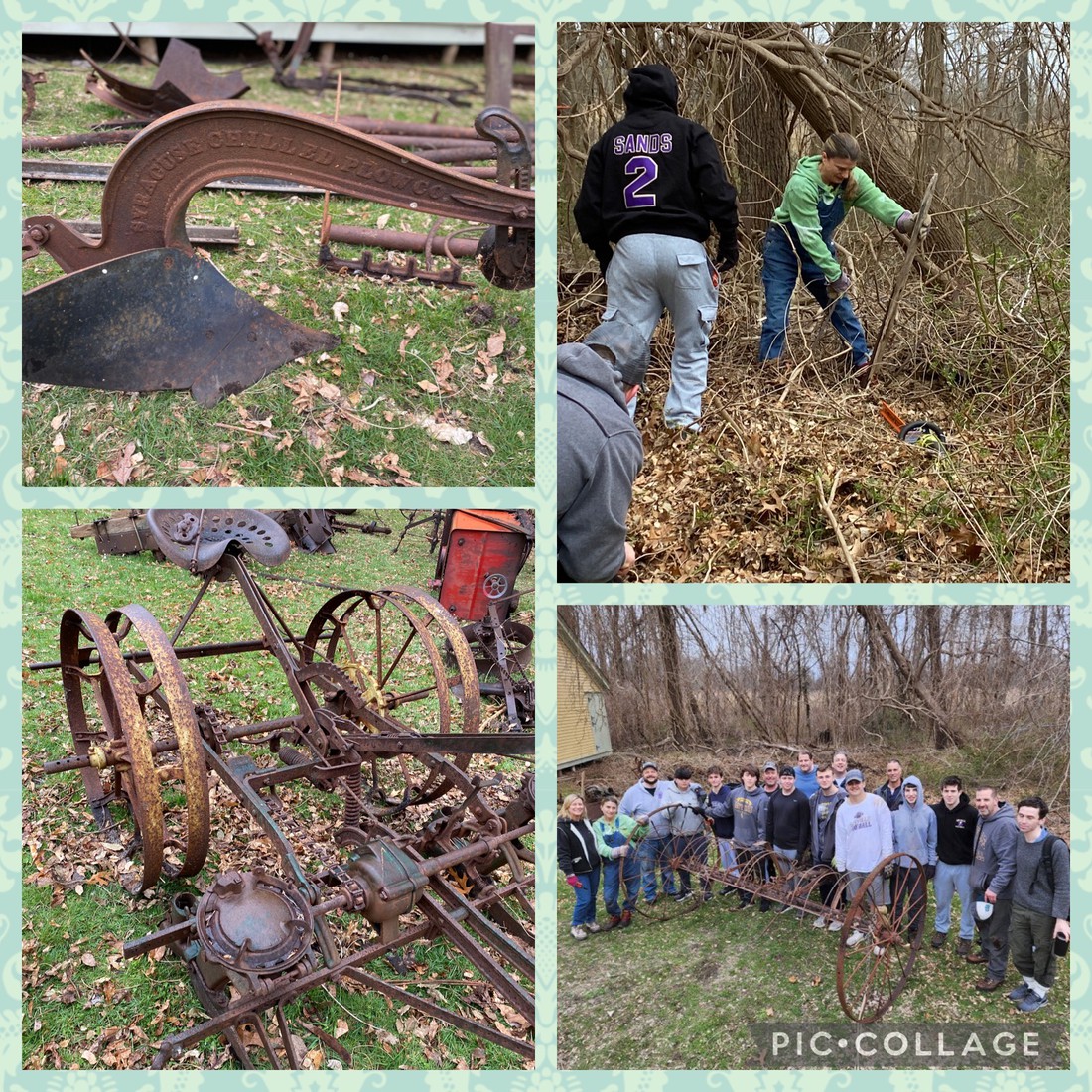 Meadow Croft Estate Tours: Every weekend starting in June through October, the estate at Meadow Croft is open for house tours. Come see what life was like at the turn of the century in John Ellis Roosevelt's summer home. House tours are given by trained docents and they run from 2:00-4:00 on Saturdays and Sundays.

Concerts in the Park: Every year the BBPHA gives back to the community by sponsoring two summer concerts in the Bayport Memorial Park. This year the dates are: June 17 and July 21, 2022. These concerts are wonderful community events and we hope you save the dates!

Historic Boat Tour: The BBPHA arranges a ferry tour of the Great South Bay, usually on the full moon of the month. This year's tour will be held in August. More info to follow.

Cemetery Tour: Plans are in the works for a local cemetery tour at St. Ann's Cemetery. There are many famous people buried there including early founding members of Bayport and Sayville. This will take place in October so look for more information in our upcoming newsletters.

Summer Solstice Walking Tour: Once again, on June 21st at 6:30pm, BBPHA member Frank Giebfried will be guiding patrons for an evening stroll that marks the beginning of the summer season. This year's tour will begin and end at the beautiful new BBP library. Along the way you will explore historic sites including boarding houses, famous people, and local historical dwellings. Registration at the Bayport Blue Point Library is required to join this tour.

At one time, the Roosevelts enjoyed an undisturbed view of the Great South Bay and boats sailing south on Brown's River from the front lawn at their Meadow Croft Estate. Then, along came Phragmites....

Once upon a time not so long ago, the Phragmites reed was not so prevalent in the wetlands on Long Island. Today, it is the most abundant species of plant in our wetlands on Fire Island and the tributaries which feed the bay. Its density is evident whenever you try to get a great view of the water from your car window on a drive as they can grow up to 15 feet tall.

Phragmites is native to the Eastern United States but has grown in tidal wetlands around the world for at least the last 3,000 years. It is believed to have been introduced here from Europe or Asia. Prior to the 1900's, Phragmites was present in mixed-plant communities and was described as being rare. By the early 1900's, however, the plant had been considered common and widespread. Today, Phragmites occupies thousands of acres and exists as a lone plant species where it grows.

Since the early 1900's, the abundance of Phragmites in East coast wetlands has been rapidly increasing displacing other wetlands plant species. This coarse, perennial grass grows on every continent except Antarctica and is believed to have the widest distribution of any flowering plant. Historically, it has been used for food, sweeteners, weaving material, weapons and decorations. Native Americans used it to treat digestive problems and headaches.

Phragmites reeds have long, woody stems, wide leaves and plumes of tiny flowers which are produced from July through October and are wind-pollinated. The plant has horizontal roots called rhizomes, prefers bright sunlight, moist soils and can tolerate water of high salinity. It is a highly competitive plant species that can displace established vegetation and once established , creates conditions which block other plants from thriving. Additionally, Phragmites produces a dense litter layer that decays very slowly, blocking light penetration to any plants which germinate beneath the dead stems and leaves.

Changes in the coastal environment as a result of human activities have made it easier for Phragmites to spread. Increased nutrients due to development, soil disturbance and hydrologic change from dredging, channelization and mosquito ditching have all created habitat conditions which favor Phragmites and increased the stressors on other wetland plants making them less able to resist invasion by Phrgamites.

Scientist agree that Phragmites significantly impact wetland ecosystems by reducing biodiversity, reducing food resources for other species, reducing habitat value for some bird species, degrading scenic vistas, and decreasing the production of larvae and juvenile fish. Some of the positive aspects of Phragmites include providing cover for ducks, herons and other waterfowl species, stabilizing the shoreline and capturing sediments.

In many coastal areas, programs are being undertaken to remove Phragmites to restore habitats to pre-Phragmites condition. Unfortunately, once established, Phragmites is very difficult to eliminate. These programs include mowing, herbicides, burning, excavating and increasing salinity levels. Each of these measures have limited effectiveness and several can damage existing conditions in the ecosystem. Given the expanses of Phragmites and the difficulty of removing it, it is likely that Phragmites is here to stay. 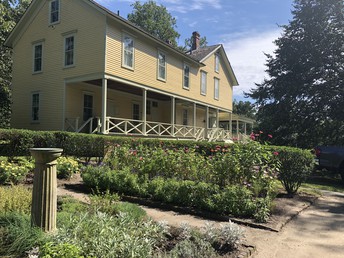 Facebook @BayportHistory
Tours start on June 4th & 5th! Hope to see you at Meadow Croft this summer!
Meadow Croft Estate, Middle Road, Sayville, NY, USA bbphistorical@gmail.com 631-472-4625 BayportBluePointHeritage.org
Embed code is for website/blog and not email. To embed your newsletter in a Mass Notification System, click HERE to see how or reach out to support@smore.com
close