What Wind is and What causes Winds

The defination of wind is that it is the sideways movement of air. It always moves from a area with high pressure to another area with low air pressure.

Local Winds are winds that blow over short distances. Local winds are created by an unequal heating of the earth. That's the only way how it is created. Well a sea breeze blows from an ocean to the land. When that happens the air over the land becomes warmer then the air in the ocean. Also it happens in the day time. But When it's night time the process reverses. A Land breeze blows from the land to the ocean. Also during night time the air on the land is cooler then the air on the water.

Global Winds are winds that blow over long distances. It's created because of the Coriolis effect and the difference in temperature between the polar areas and equator. Horse latitudes are calm winds and very little precipitation. The reason why it's called horse latitude is because sailors always got stuck in this area and they knew they wouldn't make it so they through their horses overboard. Trade winds are formed when warm air rises from the equator and instead of going up its turned right because of the Coriolis effect. Also Sailors relied on these winds for a while to get to different types of places. Jet Streams are forms high in the troposphere when 2 kinds of air mass have very different temperatures. Prevailing Easterlies forms when the high pressure areas of north and south go towards the low pressure areas. These are Global Winds 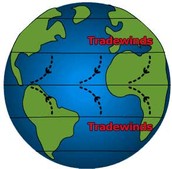 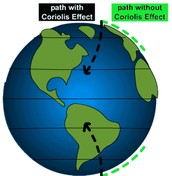