Photosynthesis is a process though which plants, algae and some bacteria, using only sunlight as a source of energy to produce glucose and oxygen from carbon dioxide and water.

How does photosynthesis work?

During photosynthesis, plants trap light energy with their leaves. Plants use the energy of the sun to change water and carbon dioxide into a sugar called glucose. 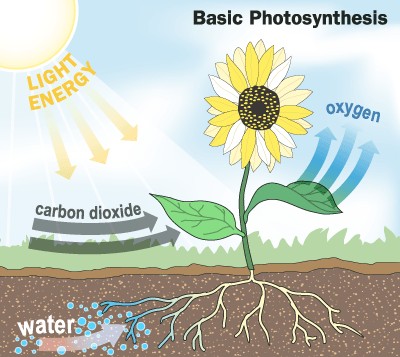 - The Three Stages Of Photosynthesis -

Chlorophyll in the plant's cells absorb sunlight hitting the plant. The capturing of the light energy allows the chlorophyll to pull electrons from water. This creates oxygen from the water to be releases as waste from the process. The electrons set off the generation of ATP to create energy for the cell.

Electrons are passed along the thylakoid membrane NADPH-electron carrier that provides the high energy needed to make carbon-hydrogen bonds in the third stage of photosynthesis.