Hussaina is using Smore newsletters to spread the word online.

Get email updates from Hussaina:

Are you an informed Roman?

Are you an informed Roman? 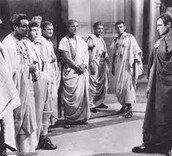 Brutus and Cassius have started with their devious plans. Brutus's so supposed "best friend" Cassius, has addressed letters from "the people of Rome" trying to convince Brutus that he is the rightful leader as he says "I will this night, in several hands, in at his window throw as if they came from different citizens writing...the great opinion that Rome holds on his name." Gullible Brutus falls for the false message as he is overwhelmed by "the peoples" response, "I know no personal reason to spurn at him but for the general." He agrees to murder Caesar at the Capital as he and the council lads plot how the death will take place, stabbing only thrice to not make a mess of Caesar.

Get your very own flower crown today. Make yourself feel superior, now only 2 siliqas.

The sun has fallen

Calphurnia tried to stop Caesar from going to the Capitol by while she pleaded "You shall not stir out of you house today...clouds...which drizzle blood upon the Capitol...O Caesar! these things are beyond all use, And I do fear them." She took the time out to explain to him that this dream is no coincidence, it is a sign. But the fatherly Caesar is black mailed by Decius as he "clarifies" Calphurnia's dream. "Your statue spouting blood through many holes, in which many smiling Romans bathed, means that you'll provide great Rome sustaining blood, and that great men will strive to get some token of approval from your holy blood. This is what Calphurnia's dream means." Ceasar went for his people and nothing more. The city is full of sorrow, the sun has set forever. RIP Julius Caesar. March 15, 44 BC

All eyes on Brutus. The people screaming with rage as he walks out of the Capitol, hands covered in Caesar's blood. Trying to persuade the people that his actions were proper, he explains, " If there be any in his assembly, any dear friend of Caesar's, to him I say that Brutus' love to Caesar was no less to his If the that friend demand why Brutus rose against Caesar, this is my answer; not that I loved Caesar less, but that I loved Rome more." The crowd changes from curses to cheers, praising him. After Brutus leaves the stage, Antony takes his place. Every word of Antony's makes the people think about how Caesar was a loving person. He indicates "...under Caesars seal to every Roman citizen he gives- to every several man- seventy five drachmas," Antony reveals Caesars will, showing how Caesar cared for the Roman people, whatever was his was also theirs. Completely opposite to what Brutus had said. Now the crowd cheers Antony's name, as for Brutus' call is sour from the citizens mouths. March 16, 44 BC

For the battle of Philippi many soldiers are needed. Interested, meet Mark Antony at the Capitol anywhere around noon.

Eye for an eye

Antony, Octavius, and Lepidus have made a list of people who are suspected of being part of the conspiracy, leading to their deaths before the war begins. Antony clearly states "These many, then, shall die. Their names are pricked." The Battle of Philippi has begun. Blood shed covering the battle field. Brutus' army coming in strong, defeating everyone in their way. But what news did Titinus bring to Cassius, "O Cassius, Brutus gave the word too early, who, having some advantage on Octavius, took it too eagerly. His soldiers fell to spoil whilst we by Antony are also enclosed." Titinius has seen the battle field all wrong, causing Cassius to do the unthinkable, as he ends his life out of fear. Brutus arrives to see the damaged, despair over his face. He sends Cassius' body away to build back his strength for the second battle....which they are losing, Antony overpowering Brutus' army. Now Brutus is the one to flee, afraid of being caught, he runs from the battle field. As they here Antony getting closer, he asks Strato (one of his men) to do him the favor of killing him. Strato first hesitates but then agrees to do so. The irony in this is that Brutus him self said "I know not how, but I do find it cowardly and vile, for fear of what might fall, so to prevent the time of life." He finds it cowardly to kill yourself, yet he decides to put a sword through his chest. Yeah, what a leader Brutus was. October 3, 42 BC

Hussaina is using Smore newsletters to spread the word online.