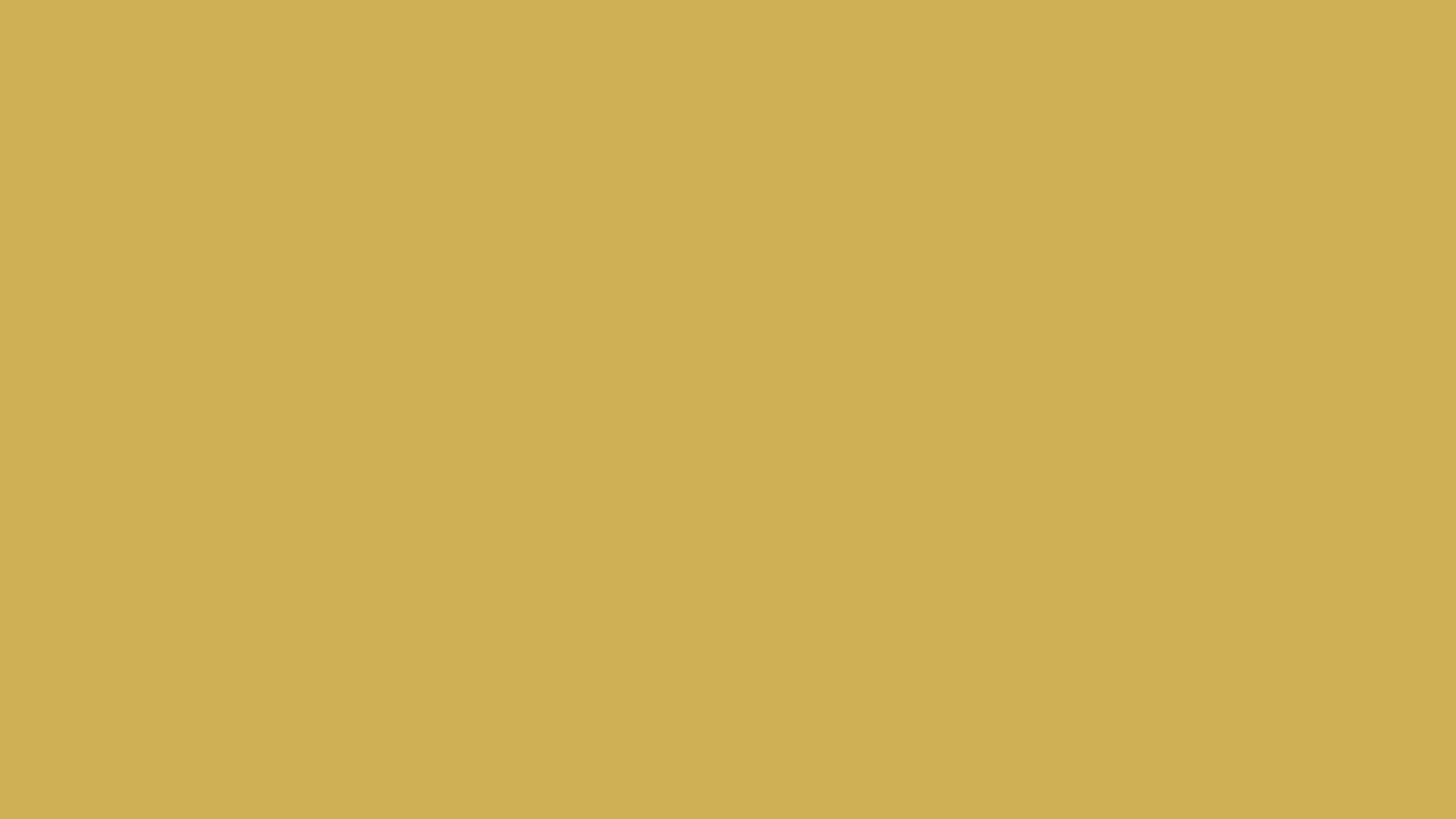 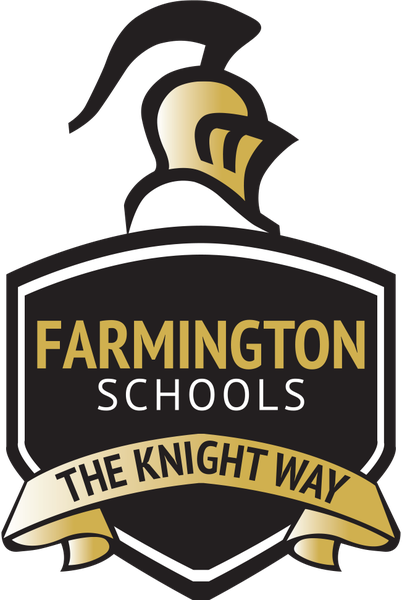 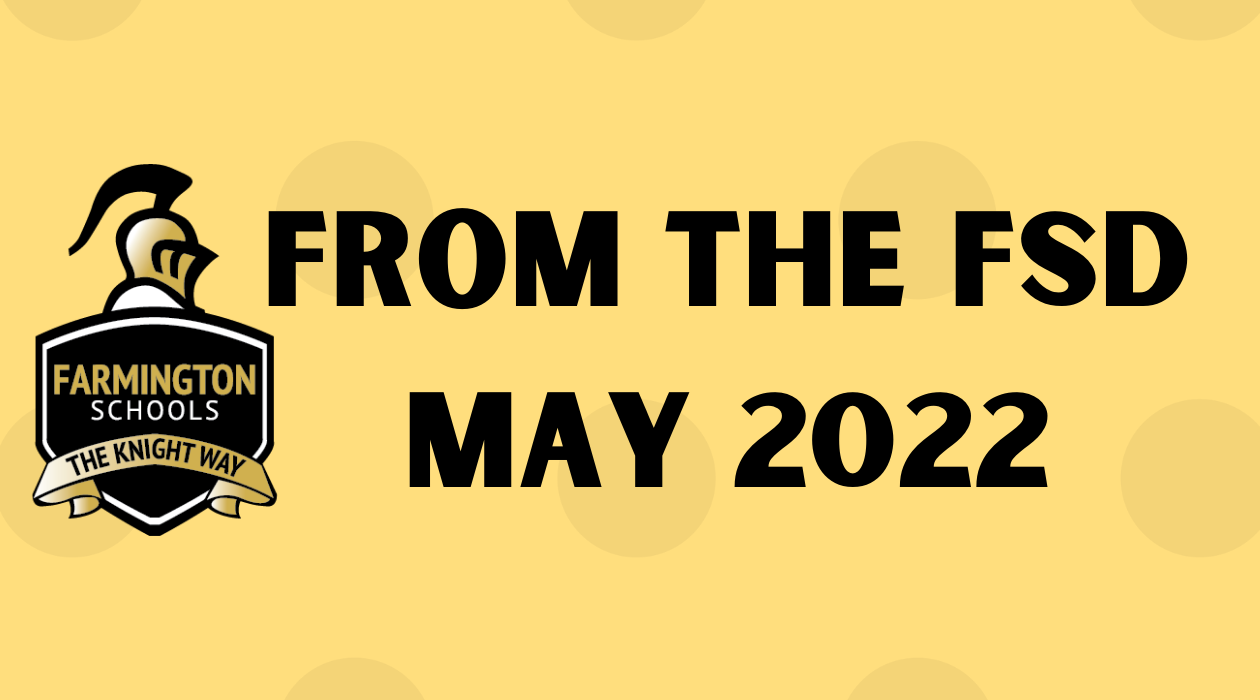 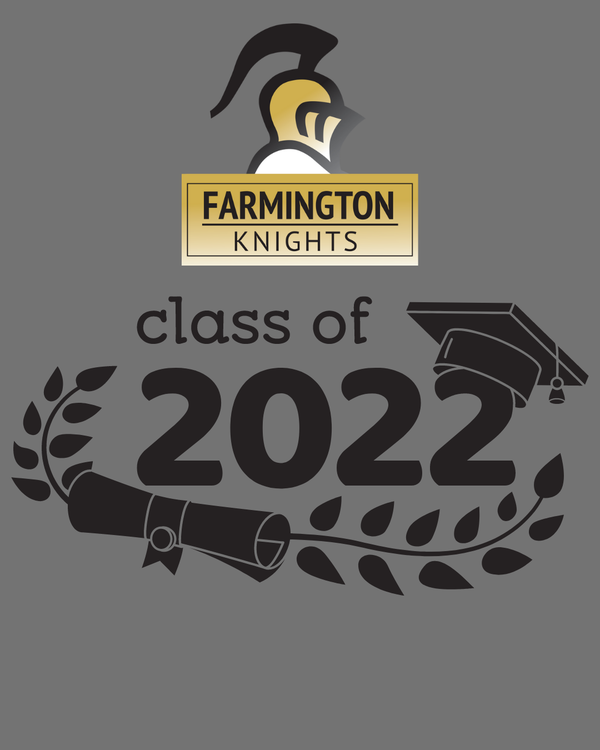 Important May Dates At The FSD 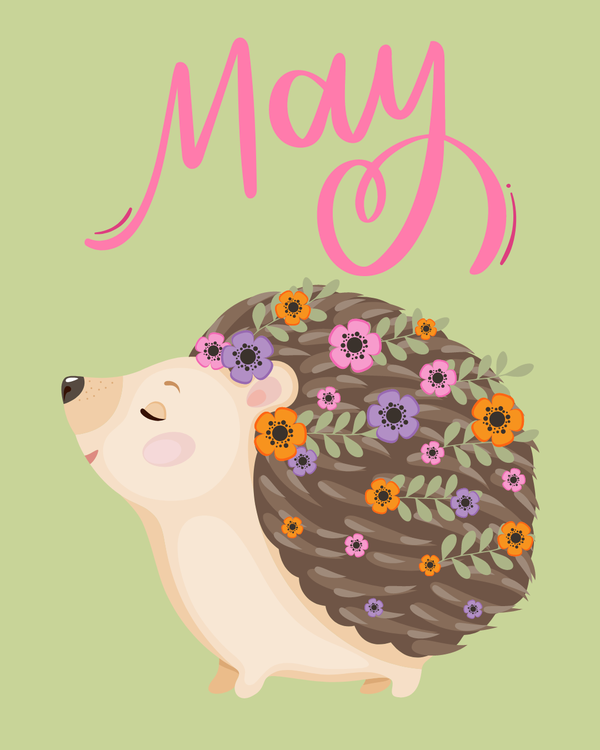 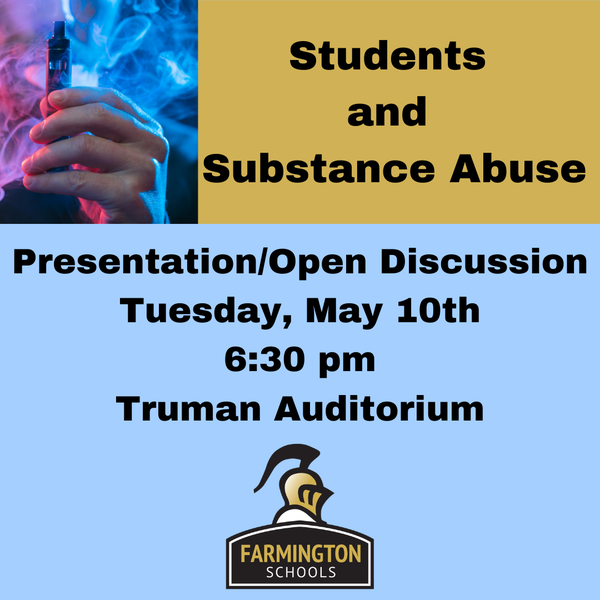 We have seen a dramatic increase in the number of children possessing at school, distributing at school, using at school or are under the influence at school. We have been testing each vape confiscated at school for THC for the past 4 years. There have been few positive field tests for THC from vape cartridges before this year's school year.

This year, especially since January we have seen a large increase in the number of vape cartridges that test positive for THC, as well as students being assessed and admitting to being under the influence of THC. We have specifically seen a rise in the use/possession/distribution of delta-8 vape cartridges. We had 3 middle school students that recently required emergency room visits this semester.

Please join us at 6:30 pm on Tuesday May 10, at Truman Auditorium, for a evening of candid dialogue about current trends and potential solutions. Our main focus for the evening will be issues created by Missouri’s Medical Marijuana law and the Agriculture Improvement Act 0f 2018. Both laws have increased the availability of harmful substances to our children. Please join us to help educate and problem solve for the safety of our children.

Students And Substance Abuse - A Message From The Superintendent 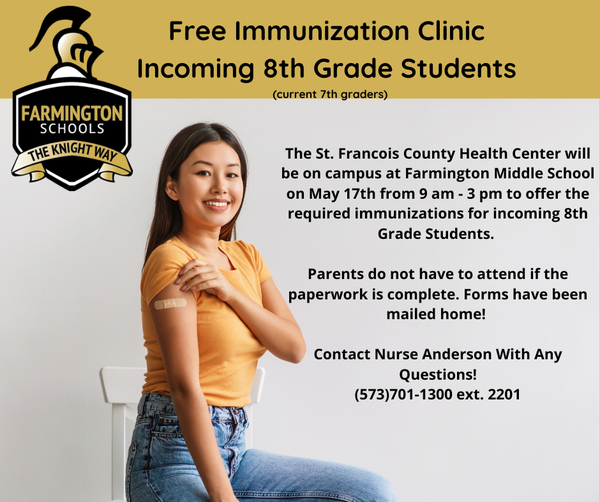 Paperwork has been emailed home. If paperwork is complete, parents do not need to accompany their student to the immunizations. If you have any questions, please contact Nurse Anderson at (573) 701-1300 ext. 2201

Paperwork has been emailed home. If paperwork is complete, parents do not need to accompany their student to the immunizations. If you have any questions, please contact Nurse Roth at (573) 701-1300 ext. 2512 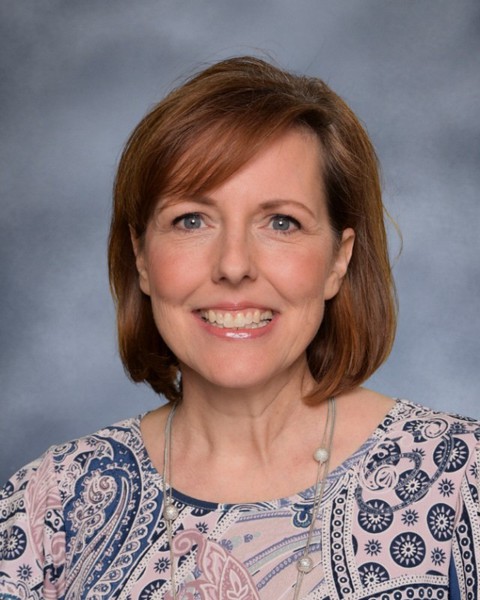 On April 21, 2022 Mrs. Diana Mays-Nielson was awarded the FSD Teacher Of The Year at the CTA Teacher of the Year banquet. Mrs. Mays-Nielson has taught at Farmington High School since 2008. During her tenure at FHS she has taught a variety of Dual Credit, ELA and Public Speaking Courses. She presently teaches Drama I, Advanced Drama, Creative Writing, College Public Speaking, Science Fiction, Shakespeare and the Supernatural, and Special Effects Stage Make-up. Additionally, Mrs. Mays-Nielson is the FHS Theatre Guild Director and one of the coordinators of the FHS participation in the Jellybean Festival.

When asked about what she considers to be the best part of teaching, Mrs. Mays-Nielson had this to say, " One of the best parts about being a teacher is seeing former students succeed in life. Regardless of what kind of student they were academically, I'm so proud to see them doing well after graduation. The other part I love about teaching is giving kids a place to be themselves where they know they are cared for, encouraged, and supported. I think that is key not only for learning, but for creativity as well. Most of my classes and theatre productions are all about creativity, so I love fostering that creative side and seeing students lean into it and just be themselves. I hope my classroom is a place where they can feel comfortable, creative, and cared for, even if they aren't elsewhere."

Teacher Of The Year candidates are nominated by their peers. During this process one of her colleagues had this to say about Mrs. Mays-Nielson, "I have stayed in touch with several students after graduation who came into high school full of timidity but are now embracing vibrant lives. So many of them credit Mays-Nielson for breaking them out of their shells. She is a motivator and a confidant. Her students love her. She puts her students at ease and challenges them to step out of their comfort zones. Her poise is exactly why she should be teacher of the year.

Last year, she was given a devastating and terminal diagnosis. The whole time she was out, we stayed in close contact. Never for a second did she entertain not coming back if she could. As soon as her doctors told her she could try, she dove back in. She is probably the bravest person I know. Her treatments and surgeries weakened her body significantly, and she was facing constant uncertainty. Still, she chose to come into an environment that, though fulfilling, is exhausting for the healthiest of us. Yet, she adapted. For example, to help overcome hearing difficulties, she provided her students individual whiteboards & taught them rudimentary sign language, so communication could continue.

She also continued to give herself wholeheartedly to the student body, though her own was fighting against her. She continued to direct her phenomenal plays and even wrote the Spring production. Her life has communicated resilience and perseverance to our students in ways words never could."

Congratulations Mrs. Mays-Nielson and thank you for serving the students of the Farmington School District! 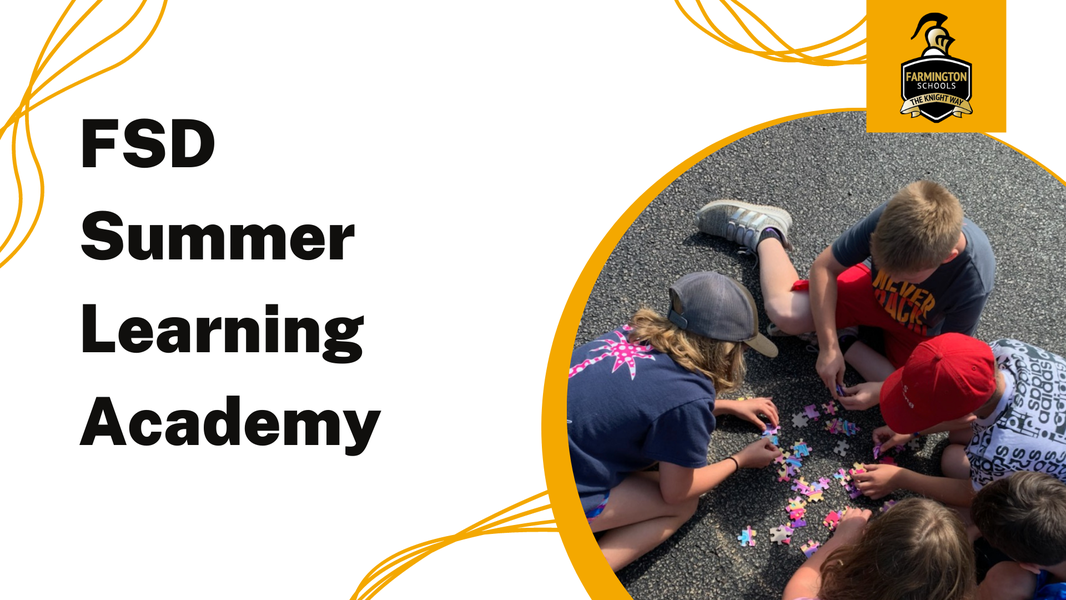 The Farmington School District is now enrolling students entering grades K-12 in the FSD Summer Learning Academy. Free breakfast and lunch are provided each day. Sign up on our district website via this link.

Information regarding Roll Call dates and Open House will be sent home in the coming days! 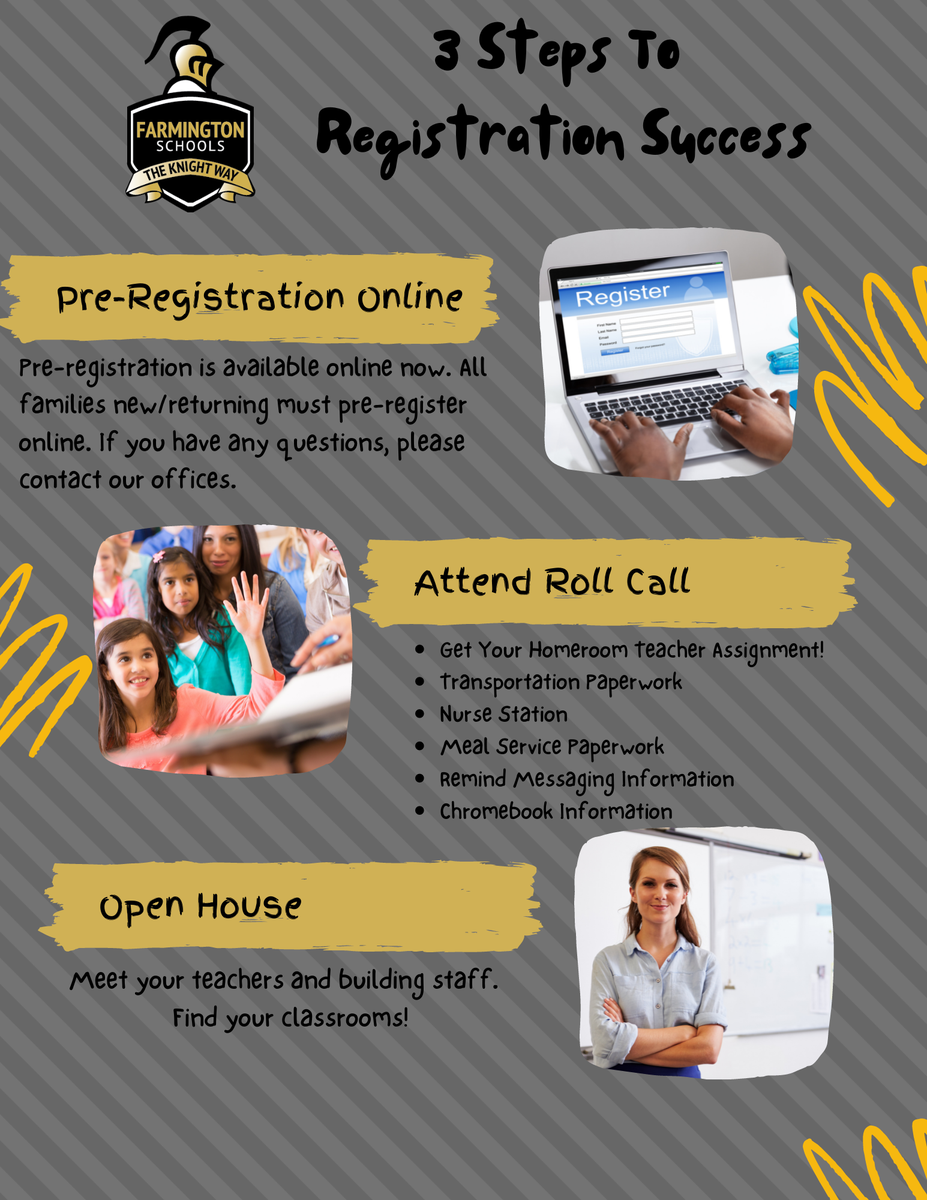 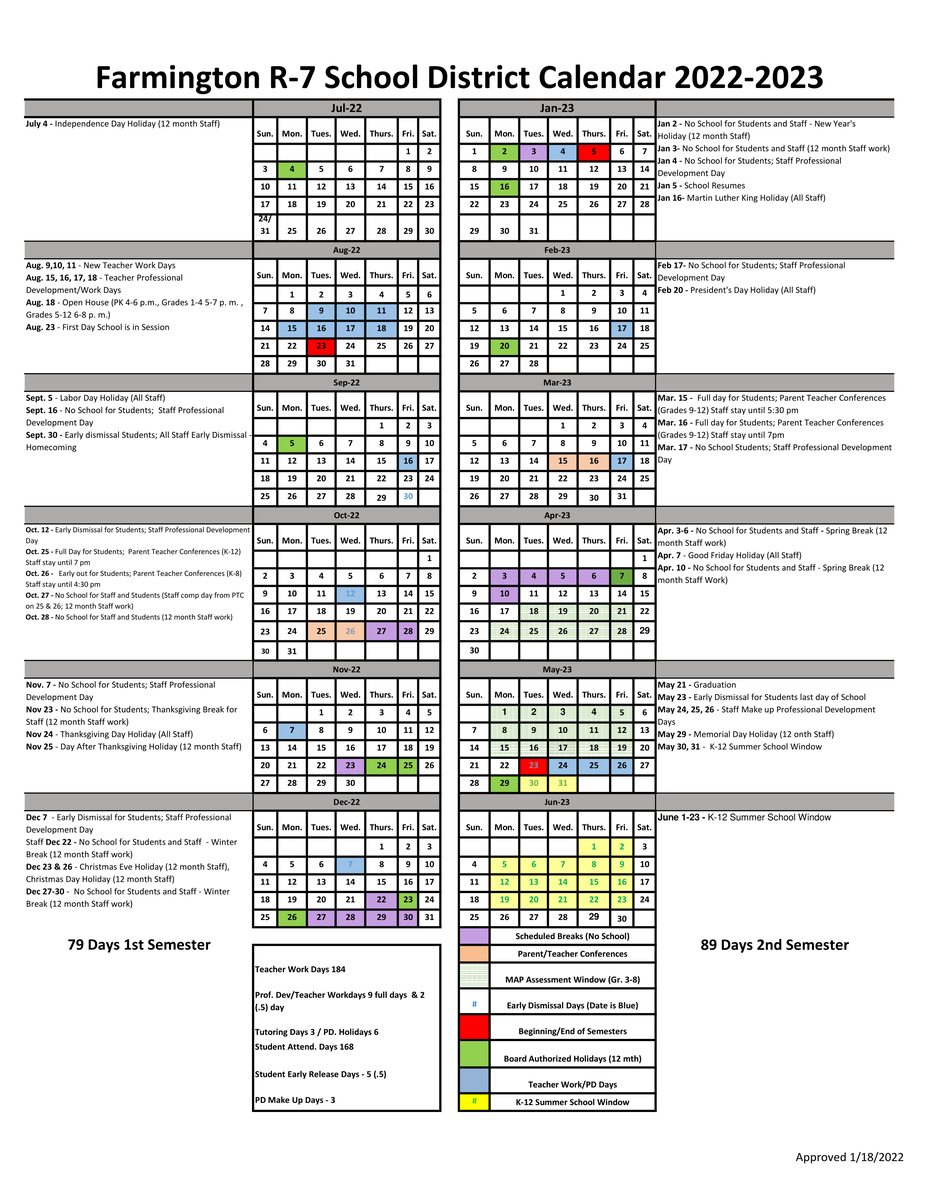 zoom_out_map open_in_new
Stay Connected
Use this button to access our Communication and Community Relations page on the FSD website. 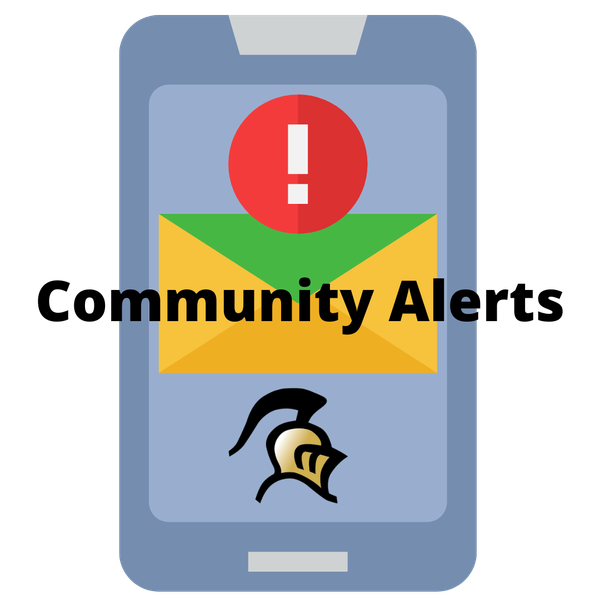 If you or someone you know would like to receive important alerts such as school closings and you are not currently receiving our Remind messages, sign up by sending the text @fsdknights to the number 81010. Or use this link to sign up today for our community alerts. Again, if you are a parent/guardian or staff member who is already receiving our messages, there is no need to sign up again here.

FSD Food Menus
Elementary Color Wheel
Athletics Calendar
Farmington R7 School District
Home Of The Knights
Website ›
Embed code is for website/blog and not email. To embed your newsletter in a Mass Notification System, click HERE to see how or reach out to support@smore.com
close
Powered by Smore
Powered by Smore