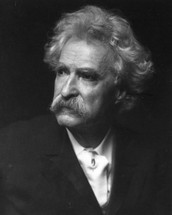 Twain was born on November, 30, 1835. Very early in his life he moved to a small town, Hannibal, Missouri. As a young child Twain's father was a slave owner, though his father only owned one slave, his grandfather owned many more. He then fought in the Civil War for the Confederate Army. Since most of his books are set in Missouri, something about Missouri must have stuck with him, because most of his books take place there. Being close to slaves as a child, Twain liked to play in the slave quarters, which is why slaves are a huge part of his writing.

Why is he famous?

Mark Twain is known for writing some of the most famous American novels of all time, some of his best works are:

Mark Twain wrote in realism, he didn't sugarcoat things. He was very good at marketing his product as you will see in the next section. 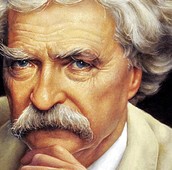 Mark Twain wrote against slavery and the poor treatment of slaves, which during the time slavery was a huge part of the south. Adventures of Huckleberry Finn was published by Mark's own publishing company, The Charles L. Webster Company.

Mark Twain was a printers apprentice as a young kid, he later after the civil war became a news reporter for many different news papers. His story ¨The Celebrated Frog of Calavaras County¨ got into the New York Saturday Press, that's where he originally gained his fame. When Twain marketed his books, he sold them for a high price, Twain had basically written U.S.Grant's Memoirs, which were very popular after Grant died. Twain sold over 350,000 copies, which he could only have done because of the timing he published them, right after Grants death.

Mark Twain's writing changed America, The Adventures of Huckleberry Finn is considered "The Great American Novel". "All modern American literature comes from one book by Mark Twain called Huckleberry Finn". Twain's books provide a great historic view of the past, he wrote about the time he lived in and everything that happened around him. He coined the phrase "The Gilded Age" in his book The Gilded Age: A Tale of Today. It was an era of rapid economic growth.

Mark Twain's writing style has many elements of realism and regionalism. He uses many slang words from the time, and he didn't sugarcoat America.