Angad is using Smore newsletters to spread the word online.

Get email updates from Angad:

The word perseverance means to overwhelm goals despite adversities and failures, and at the end being able to triumph. Perseverance is a big role in gaining success, which we have seen is what people use in order to achieve their successes.

The Lady Jags are a girls basketball team who have faced many horrible adversities and hardships in their personal life, and have persevered and vanquished their problems with some help. Many girls on the team had come from a bad neighborhood or family, which had troubled them. For instance, some of the parents are abusing drugs or are alcoholics, and going home to them is hard for the girls. Another example of this is with a girl who had ran away from home because of bad parents who abused drugs, which provoked her to start using drugs as well. Although these girls had faced some very bad situations, it didn’t stop them from triumphing with help from coaches and playing basketball. The coaches on taught the whole team about solidarity, and to persevere the goals they set. Other examples of how these players triumphed was from rehab and getting a proper life. These people worked hard and despite having problems they, at the end, triumphed without winning a single game and transcended their adversities.

Carry On Dartanyon and Leroy: Compare/Contrast

An ESPN documentary known as “Carry On” featured two boys named Dartanyon Crockett and Leroy Sutton who’ve had an interesting story. These two teenage boys had persevered and accomplished many things, despite their disabilities, as a pair, with some similarities and differences. As children, these two boys both had very difficult situations with their family. Leroy stayed with his grandparents because his mom was a drug addict, and his father was in jail most of the time. On the other hand Dartanyon’s mom had died from a disease when he was eight, and his father abused drugs. After having such difficult childhoods, both boys unfortunately have disabilities and have had to be resilient. Dartanyon was born with Leber’s disease, which is an eye disease, and is legally blind. Contrary to Leroy who was severely harmed by a train, and is now without both of his legs. Dartanyon joined the wrestling team when he went to high school, as did Leroy. This created a brotherly like bond between them in which Dartanyon is Leroy’s legs, where as Leroy is his eyes. Most people at Cleveland's Lincoln-West High School didn’t graduate, less than 40 percent did. Dartanyon graduated without even being able to read properly, while Leroy was able to, but Leroy couldn’t walk around. They both graduated together from the same school, but were very different.High school ended, which meant that real life started for both of them. Lisa Fenn, who is a catalyst in the lives of Dartanyon and Leroy, showed their story throughout the world,which helped both of them, in different ways. With that money and ESPN’s help, Leroy was able to go to college and study video game design for a career, and he also became a father. On the other side, Dartanyon practiced the Paralympic sport of judo, and went on to participate in the Paralympic games, and won the bronze medal. As it is show, the two boys both have very similar situations, but they are different in many ways.

In the image above, the team known as " The Lady Jags" show how they play in solidarity and are determined despite their lack of skill.

This image shows how Dartanyon and Leroy have come from a bad neighborhood, but were able to persevere and have achieved many things. 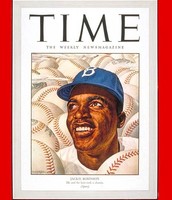 Robinson became really famous through his perseverance and determination to become a baseball player despite all the adversities and hatred he faced as a black athlete. He was even on the cover of TIME magazine which is a great achievement.

John Mautner, a pushcart entrepreneur had a lot of changes and actions he took to get to the position he reached with his ideas. First, John Mautner had an ordinary life. He had a nice job, a nice home in a pleasant neighborhood, and a new bride that he loved a lot. Not long after John started living that lifestyle, he gave up everything. He quit his job, sold his nice house, and left the beautiful neighborhood. John took a great amount of risk and moved to Orlando with his wife, in hope of starting a new business and gaining financial independence. After all these transformations occurred, Mautner started his business of selling cinnamon-and-sugar-coated nuts on a pushcart. He had been inspired to take upon these risks from the pushcart entrepreneurs who worked in the cities of Europe. Following this, John wasn’t able to afford to keep his plan the same, since he was almost broke after a year. Now he had decided that he would sell his product at Universal Studios. Then, after John had made his decision, he took action and called out to the vice president of Universal Studios. In order to get his cart into the theme park, John had to pay a fee of a hundred thousand dollars. Mautner couldn’t pay this fee. Instead of taking this option, John set up a meeting with the executives and the vice president of Universal Studios. While he was there, John had made his amazing, out of the world, nuts that he served to everybody. Although they loved the taste of John’s new product, they needed additional time to consider the proposal. After they said this, John wasn’t going to let any more time be wasted. Mautner chose to make a proposal that would require a lot of determination and perseverance, more than what he had already done. John told them that if they gave him a thirty day trial he would work twelve hours a day, every day, and give them twenty-five percent of the sales. Finally, John worked all those hours and minutes that he had said to the executives, and made 40,000 dollars in the first month. His business, called the “Nutty Bavarian,” was a success and a triumph for Mautner when he made a million dollars after one year. Mautner has shown how much determination and perseverance it took for him to become the successful man he became.

Eleanor Roosevelt Infographic: Cause and Effect

You can probably see this image to be a representation of what Eleanor Roosevelt did for her country through her "road to perseverance." Through this, she was able to triumph, being one of America's greatest heroes.

John Mautner is a great example of people who showed perseverance because of how he became successful from his business, after being broke.

This former athlete showed great determination and toughness when he was paralyzed from a hard tackle. After a while of hard work and persistence, Eric was able to get movement and was able to make a career despite his disability. He showed great perseverance on his way to a big triumph.

A Lesson from Perseverance

As we see other examples of perseverance from people that have made an impact on history, we can also take in knowledge from their work to overwhelm the adversities we have in our current world. Others may have faltered on their "road to perseverance," but from their mistakes, we can be better and avoid those mishaps, overcome the adversities, and triumph in the end. Showing perseverance can do many things, including teaching others.

Connect with Angad A

Angad is using Smore newsletters to spread the word online.