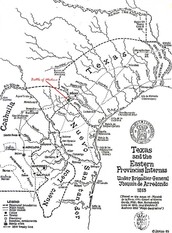 '' The bloodiest battle ever fought in Texas! '' The battle was fought on August 18, 1813. Mexico and Texas Republicans were in battle against Spain. Mexico won against Texas Republicans and Spain with their leader Santa Anna. 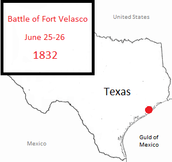 The battle was fought on June 26, 1832, in Anahuac. Texas and Mexico were in battle because there was a misunderstanding because Texas was unaware that Mexico was no longer an enemy. Mexicans were forced to surrender to Texas at the mouth of the Brazos River after loosing five soliders and injured 16.

The battle was fought on August 3, 1832, between Mexico and Texas. Texans won the battle with only four men dead, which forced Mexicans out of east Texas and back to Nacodoches. Stephen F. Austin determined where Piedras were to be sent.

Domingo de Ugartechea gave American colonists a small cannon to protect themselves against the Indians with and asked for back and they refused. When Mexicans tried to attack American colonists they were surprised when texans attacked them for the Constitution of 1824 and forced Mexico to surrender.

Texans and Mexico fought on October 28, 1835. Texans were able to win this battle by capturing one of Mexico's cannons and counterattacking. Texas only had one loss and one wounded where as Mexico had 14 losses and 39 wounded.

Texas was fighting Mexico for freedom on April 21, 1836. Texas defeated Mexico and took some as prisoners.

Follow Skylar Stover
Contact Skylar Stover
Embed code is for website/blog and not email. To embed your newsletter in a Mass Notification System, click HERE to see how or reach out to support@smore.com