The life of a hero

The life of a hero 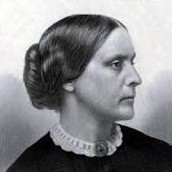 In The Life of Susan B. Anthony

Susan B Anthony was born on February 15, 1820 in Adams, Massachusetts. She was the second oldest of 8 children to a local cotton mill owner and his wife. The family moved to Battenville, New York in 1826. Near 1826 Susan was sent to study at a quaker school in Philadelphia. Her father's business failed in the late 1830's and she returned home. In, the 1840's her family moved to a farm in Rochester, New York. in 1849 she started devoting her time to social issues. In 1851 she started going to anti-slavery conferences, and got involved in the temperance movement which tried to stop the production and sale of alcohol.There she was inspired to fight for women's rights. She was denied a chance to speak at a temperance convention because she was a women, and she realized that no one would take women in politics seriously unless they had the right to vote. In 1852, Anthony and Stanton established the Women's New York Temperance society. They started fighting for women's rights and they formed the New York State Women's rights committee. She started petitions to have the right to vote. In 1872 Anthony voted illegally and was arrested and fined. In 1905 she met with President Theodore Roosevelt to lobby for women's rights. On March 13th 1906 she died. It wasn't till 14 years after her death that women got the right to vote.
biography.com/people/susan-b-anthony-194905