The building blocks of all living things

The building blocks of all living things

Deoxyribonucleic acid, a self-replicating material present in nearly all living organisms as the main constituent of chromosomes. It is the carrier of genetic information. Frederich Miescher observed DNA in the 1800's. 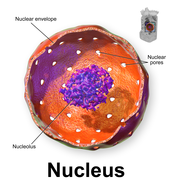 DNA is found in the nucleus. 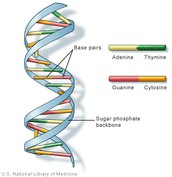 What is it made of?

DNA is composed of three primary parts: two long polymers called nucleotides, with backbones made of five-carbon sugars and phosphate groups joined by ester bonds. Attached to each sugar is one of four types of molecules called bases (thymine and cytosine and guanine and adenine).

What is its structure?

DNA is a double helix.

What does DNA do?

ribonucleic acid, a nucleic acid present in all living cells. Its main role is to act as a messenger carrying instructions from DNA for controlling the synthesis, in some viruses RNA rather than DNA carries the genetic information.

What does RNA do?

RNA is involved as a carrier of information, and as a catalyst for the synthesis of the peptide bond.