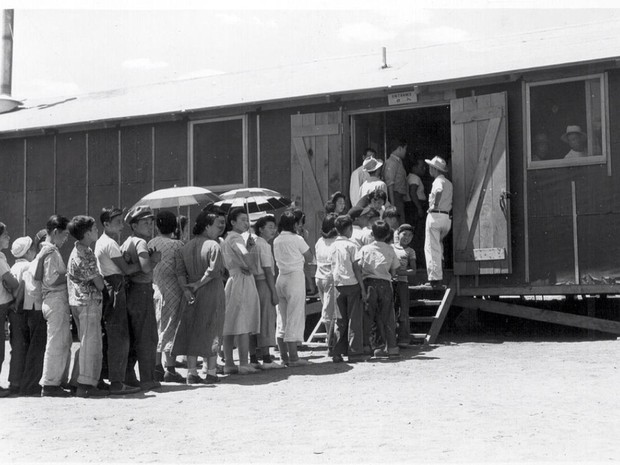 -The photo gives us an understanding of how many people were forced into the camps, enough that they had to wait In very long lines.

-Shows the conditions of the camps, the mess hall in this photo is small and doesn't seem like it would be clean.

-The Japanese Americans had to wait outside under the hot sun, most of the women have umbrellas over they're head to block it out.

-By looking at the background you can tell unfortunately they have to live in the hot desert for the time they stayed in the camps.

-They had to wait in these unbearable lines with their impatient kids, three times a day for three years.

To conclude this photo, I would hope we learned a lesson from this event in history. The Japanese Americans didn't deserve the unnecessary discrimination and dehumanization. Hopefully people learned to really think before they ruin innocent peoples lives. In the story even when they finally got back from the camps, things weren't the same, and it seemed like it would take years for things to go back to the way they were. Which isn't deserved.