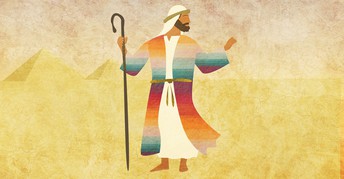 Who is always there for you?

Jacob ended up with twelve sons from his two wives and two concubines. Having multiple spouses is not part of God’s plan for His people. However, God remained faithful to His promise to make a great nation out of Abraham’s line. Out of his twelve sons, Jacob had a favorite—Joseph. This made Joseph’s older brothers jealous and angry. In fact, his brothers became so mad that they sold him as a slave to some traders (and told their father he was dead). Joseph was taken to Egypt and made a servant in Potiphar’s household. God was with him and gave him success. But after being falsely accused, Joseph found himself in prison. Was God still with him?

Heavenly Father, sometimes we feel all alone. Help us to remember that You are always there for us. In Jesus’ name we pray. Amen.

God is with us in good and bad times.

Joseph was Jacob's favorite son, and his brothers knew it. They were jealous of the special coat their father had given Joseph, and they were angry with Joseph because of his dreams that they would bow down to him.

Joseph's brothers sold him to traders and he became a slave in Egypt. Then he was thrown into prison for something he didn't do. But when Pharaoh had dreams he couldn't explain, Joseph was brought out of jail to interpret them.

Joseph told Pharaoh what his dreams meant, and Pharaoh made him second in command in Egypt. Joseph would oversee the gathering of grain so that the Egyptians would have enough to eat when the famine came.

God was with Joseph in good times and in bad times. God had a plan for Joseph's life, and Joseph trusted that God would take care of him. Years later, God would work through Joseph to save his family from starvation. That was important, because it was through Jacob's family that Jesus the Savior would one day be born!

For those who love God all things work together for good. Romans 8:28

Dear Lord, thank You for working things for good in Joseph’s life and in our lives. Thank You for providing our daily food and all that we need. Help us to share what we have with those who need it and especially help us to share Your love with everyone. In Your name we pray. Amen.