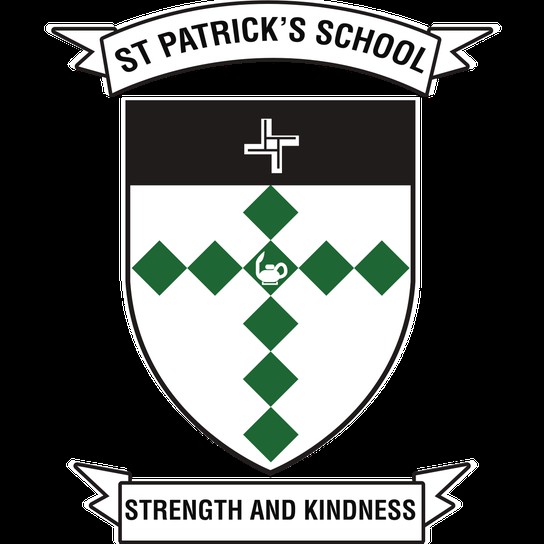 As we continue to progress through this Season of Lent (40 days leading to Easter) I have included below, quotes from Pope Francis and Oscar Romero, an Archbishop in El Salvador. These support the more contemporary view of Lent, in which we see it as a time in which we can be more giving of ourselves rather than focusing upon denying ourselves. 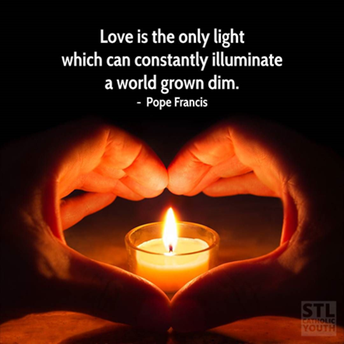 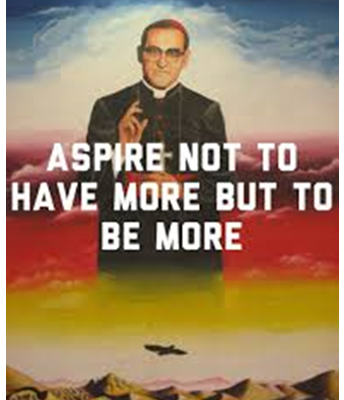 Last week we shared with you the links below to hub videos that were created by the school staff. The aim of the videos is to give you an insight into daily life at school since we have not been able to have the majority of you onsite as well as not being able to host our usual Term 1 whānau day.

If you have not already looked at these please access these via the links below:

On Monday we sent two teams to take part in a ‘rippa-rugby’ mini-tournament. As you can see from the collage of photographs below the children had a great day and enjoyed taking part and competing against a range of other local schools. 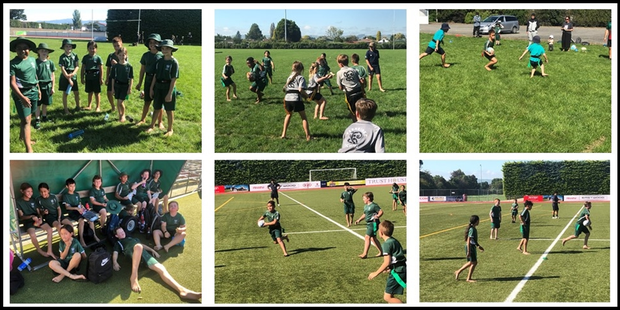 As a school community, we would like to say a huge thank you to ‘Composting New Zealand' - https://compostingnz.co.nz/ . Over the last week, they have donated and dropped off both bark and soil which as you can see from the photographs below are being put to great use. The bark has been used as a base for a new outdoor area for Hub 1 students and the soil is being used in our vege gardens. 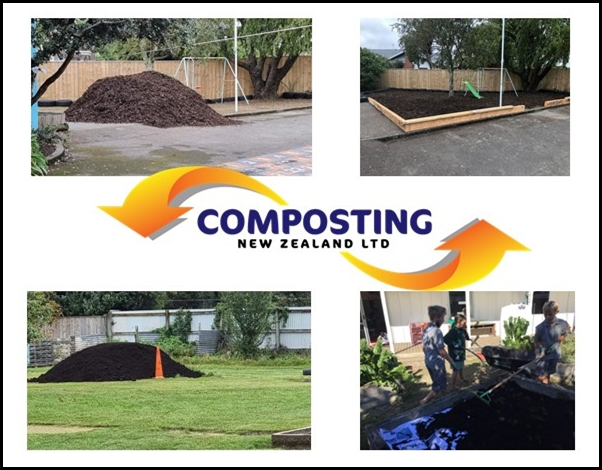 Next week, I will be away from school and John Murray will be standing in for me as Acting Principal. Now that the borders are open I am taking the opportunity to visit my family in England for three weeks and will be returning for the start of term 2. In my absence, please contact John if you have questions or concerns or if it is something that is not urgent you are still welcome to email me as I will check emails periodically during my time away.

Listed below are key events that are currently planned for the end of term 1: 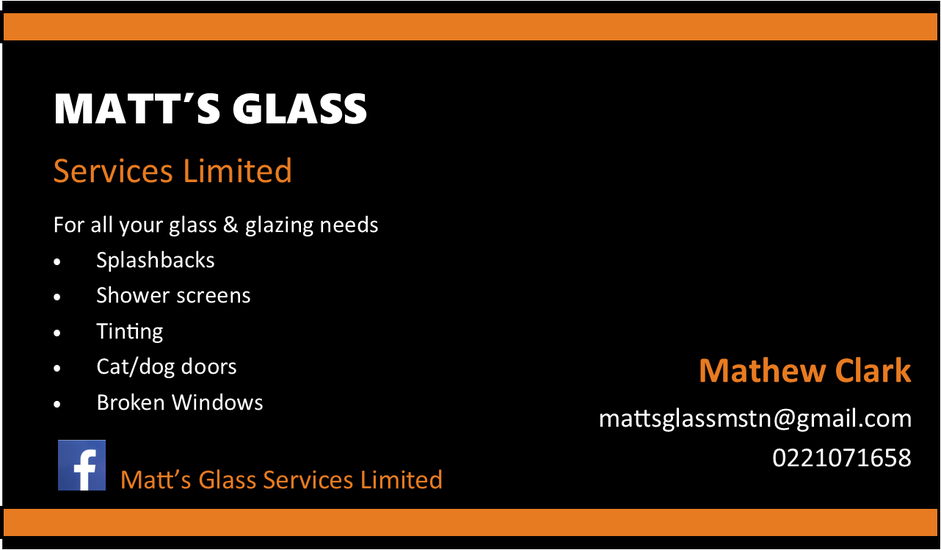 Virtue of the Month: Love - Aroha

Whoever lives in love lives in God, and God in them - Ephesians 4:2

The Death of Lazarus

11 A man named Lazarus, who lived in Bethany, became sick. Bethany was the town where Mary and her sister Martha lived. (2 This Mary was the one who poured the perfume on the Lord's feet and wiped them with her hair; it was her brother Lazarus who was sick.) 3 The sisters sent Jesus a message: “Lord, your dear friend is sick.”

4 When Jesus heard it, he said, “The final result of this sickness will not be the death of Lazarus; this has happened in order to bring glory to God, and it will be the means by which the Son of God will receive glory.”

5 Jesus loved Martha and her sister and Lazarus. 6 Yet when he received the news that Lazarus was sick, he stayed where he was for two more days. 7 Then he said to the disciples, “Let us go back to Judea.”

8 “Teacher,” the disciples answered, “just a short time ago the people there wanted to stone you; and are you planning to go back?”

9 Jesus said, “A day has twelve hours, doesn't it? So those who walk in broad daylight do not stumble, for they see the light of this world. 10 But if they walk during the night they stumble, because they have no light.” 11 Jesus said this and then added, “Our friend Lazarus has fallen asleep, but I will go and wake him up.”

12 The disciples answered, “If he is asleep, Lord, he will get well.”

13 Jesus meant that Lazarus had died, but they thought he meant natural sleep. 14 So Jesus told them plainly, “Lazarus is dead, 15 but for your sake I am glad that I was not with him, so that you will believe. Let us go to him.”

16 Thomas (called the Twin) said to his fellow disciples, “Let us all go along with the Teacher, so that we may die with him!”

Jesus the Resurrection and the Life

17 When Jesus arrived, he found that Lazarus had been buried four days before. 18 Bethany was less than two miles from Jerusalem, 19 and many Judeans had come to see Martha and Mary to comfort them about their brother's death.

20 When Martha heard that Jesus was coming, she went out to meet him, but Mary stayed in the house. 21 Martha said to Jesus, “If you had been here, Lord, my brother would not have died! 22 But I know that even now God will give you whatever you ask him for.”

23 “Your brother will rise to life,” Jesus told her.

27 “Yes, Lord!” she answered. “I do believe that you are the Messiah, the Son of God, who was to come into the world.”

28 After Martha said this, she went back and called her sister Mary privately. “The Teacher is here,” she told her, “and is asking for you.” 29 When Mary heard this, she got up and hurried out to meet him. (30 Jesus had not yet arrived in the village, but was still in the place where Martha had met him.) 31 The people who were in the house with Mary comforting her followed her when they saw her get up and hurry out. They thought that she was going to the grave to weep there.

32 Mary arrived where Jesus was, and as soon as she saw him, she fell at his feet. “Lord,” she said, “if you had been here, my brother would not have died!”

33 Jesus saw her weeping, and he saw how the people with her were weeping also; his heart was touched, and he was deeply moved. 34 “Where have you buried him?” he asked them.

“Come and see, Lord,” they answered.

37 But some of them said, “He gave sight to the blind man, didn't he? Could he not have kept Lazarus from dying?”

Lazarus Is Brought to Life

38 Deeply moved once more, Jesus went to the tomb, which was a cave with a stone placed at the entrance. 39 “Take the stone away!” Jesus ordered.

Martha, the dead man's sister, answered, “There will be a bad smell, Lord. He has been buried four days!”

40 Jesus said to her, “Didn't I tell you that you would see God's glory if you believed?” 41 They took the stone away. Jesus looked up and said, “I thank you, Father, that you listen to me. 42 I know that you always listen to me, but I say this for the sake of the people here, so that they will believe that you sent me.” 43 After he had said this, he called out in a loud voice, “Lazarus, come out!” 44 He came out, his hands and feet wrapped in grave cloths, and with a cloth around his face. “Untie him,” Jesus told them, “and let him go.”

This Friday (week 9) we are planning our first community event of the year - our traditional annual Biathlon and we are delighted to announce that family and whanau are finally welcome to join us as this is an outdoor event.
Students are required to bring their bikes (or scooters) and helmets to school on the day and place them in the allocated areas on the field. Students are also encouraged to wear their house colours to school.
The first race will start at 12.00 on the field.
Order of events

We look forward to a fun and sunny day ! 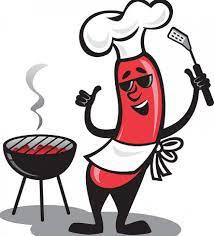 Every Friday from this Friday on we will be having a sausage sizzle. The cost is $2 per sausage. Children are to order these from their classes by 9am on Friday. For your information the staff cooking the sausages will be wearing masks and gloves and cooking outside. 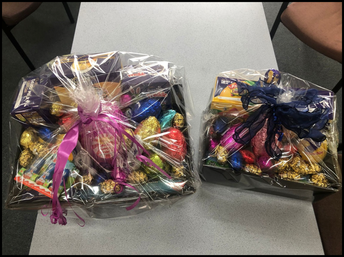 Thanks to all of you who have already sold tickets and returned your sheets. If you need more sheets please see the ladies in the office. All sheets and money to the classroom teachers by 8th April. 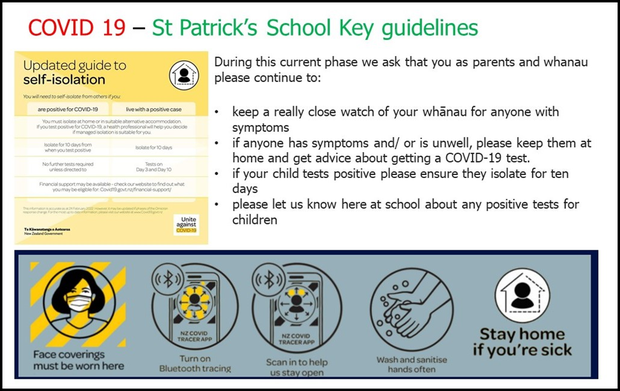 For the past two years we have enjoyed having Jo Miller undertaking the role of Learning Support Coordinator (LSC). This was a new initiative for a number of schools across New Zealand and is aimed at giving students, parents & whānau and teachers support with the varying needs of children at school. Please see a summary of Jo’s role below and if you think she can be of support to you please make contact with her - (remember the only silly question is the one we don’t ask).

Over the past week we have been exploring Superflex brain and Rock brain as ways of explaining our thinking. The children have been developing strategies to defeat the Rock brain and became more flexible.

Superflex thinking: A flexible thinking pattern in which a person is able to consider different points of view or ways to do something.

Rock Brain thinking: A rigid thinking pattern in which a person gets stuck on an idea and has difficulty considering other options or ways to do something. 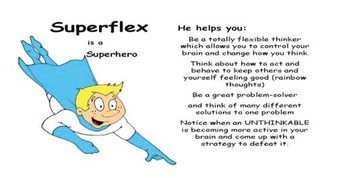 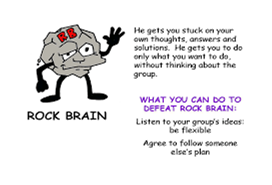 Getting the gardens ready with the compost donated by Composting NZ! We are so grateful for this. 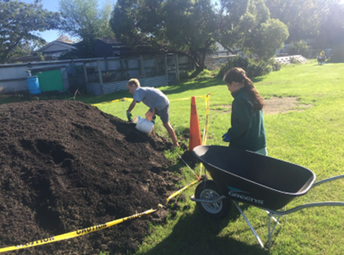 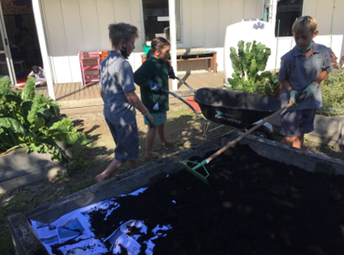 All cards, filled or not, to be returned to your child’s class teacher by Friday, please. 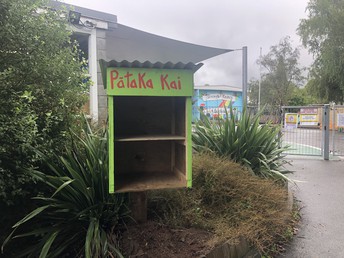 CHECK OUT THE PATAKA KAI!

Please help yourself to kai at the top of the hill. Some fresh goods from the garden have been added as well as some other donations from our community.

Last year the school moved to using ‘SchoolDocs’ to create a website for our school policies and procedures. As part of this process, throughout each year, as we review our policies we will ask for feedback from staff, board and parent communities.

During term 1 of this year we are reviewing and asking for feedback on the following policies:

Please read these policies and give your feedback by following the instructions below:

Don't forget to sign your children up if they want to play winter hockey or netball. You will find the links on your etap app or on the Facebook pages. 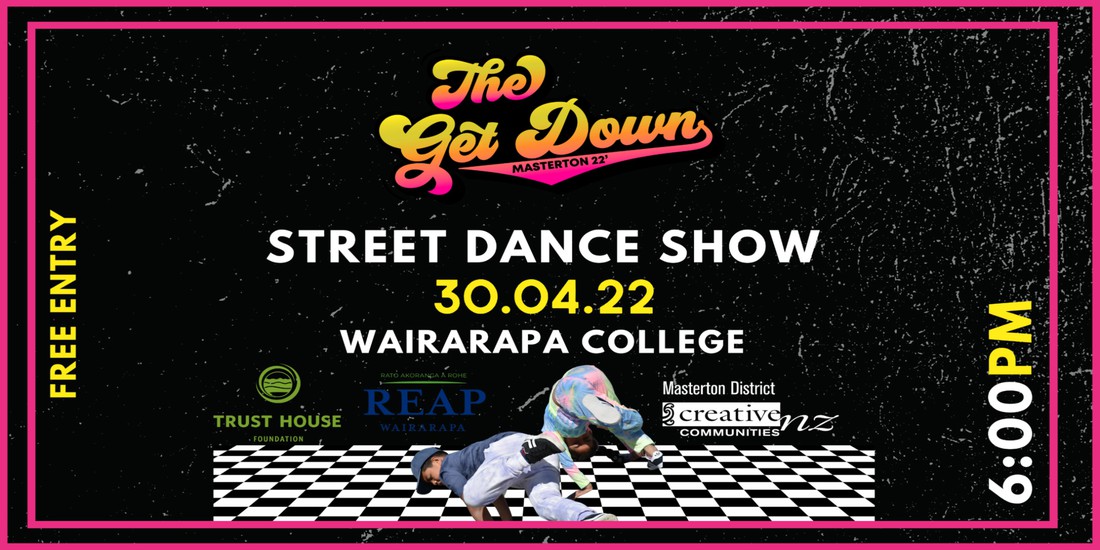 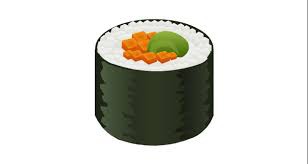 This is available on Tuesdays. Both the Sushi and the Noodles are $4 each and the Chicken Wings are $2.00 each. Orders must be in by 9am on Tuesday morning. Please order from your child's class. 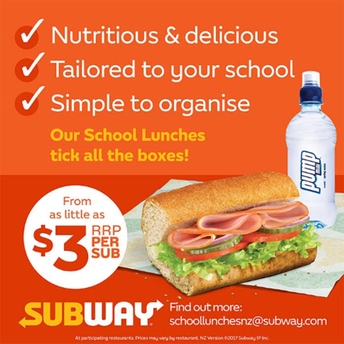 This is available every Wednesday. Order through the school office or order online at www.subwayexpress.co.nz. Register - then search for St Patrick's School and place your order. Orders can also be placed in your child's class. 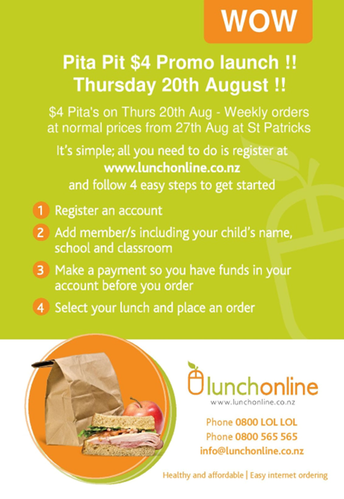 This is available on Thursdays. Order online at www.lunchonline.co.nz 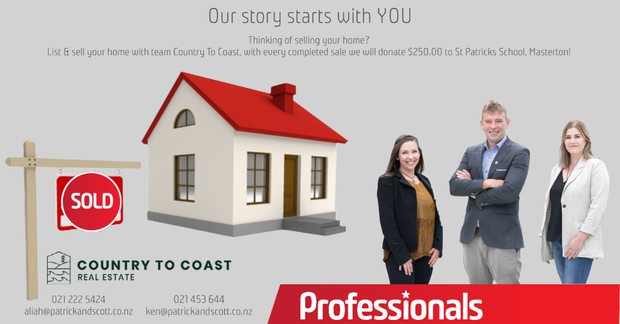 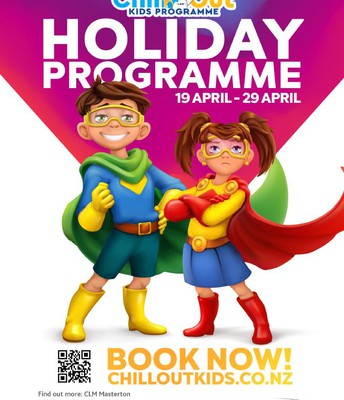 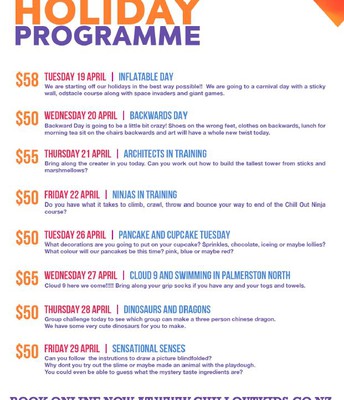 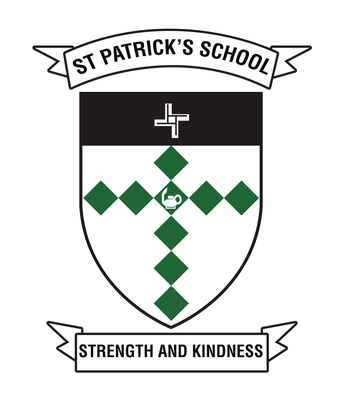 Contact St Patricks Masterton
Embed code is for website/blog and not email. To embed your newsletter in a Mass Notification System, click HERE to see how or reach out to support@smore.com
close
Powered by Smore
Powered by Smore