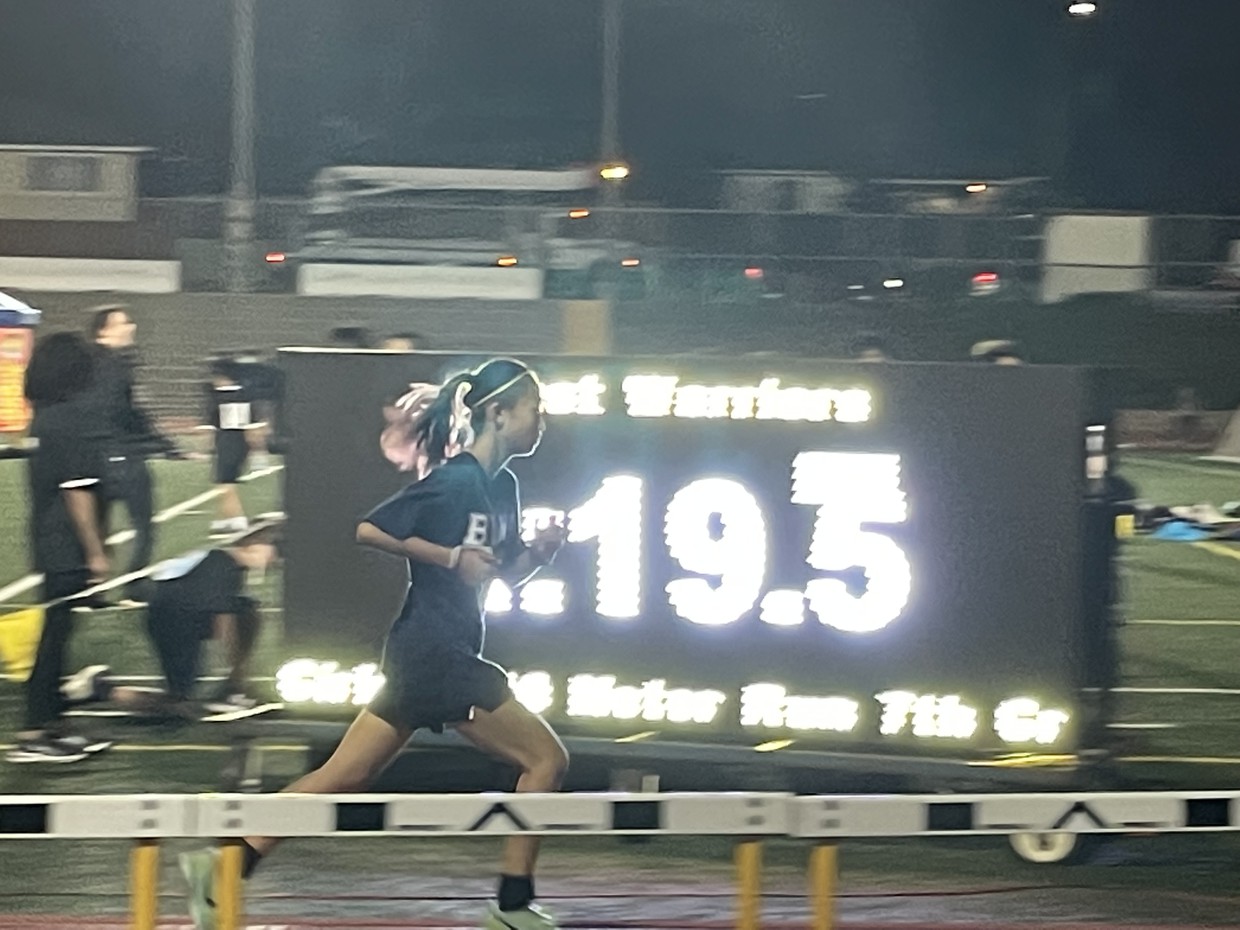 It was a welcome sight Tuesday night to see the long-awaited return of the District-wide Middle School Mile-Run, at West High. With excellent representation by all 8 of the Torrance Unified middle schools. Bert Lynn was no exception.

Coach Mike Caporaso likens this event to a solo musical performance. "It is very intense for these athletes, and they work hard to get here," he noted. 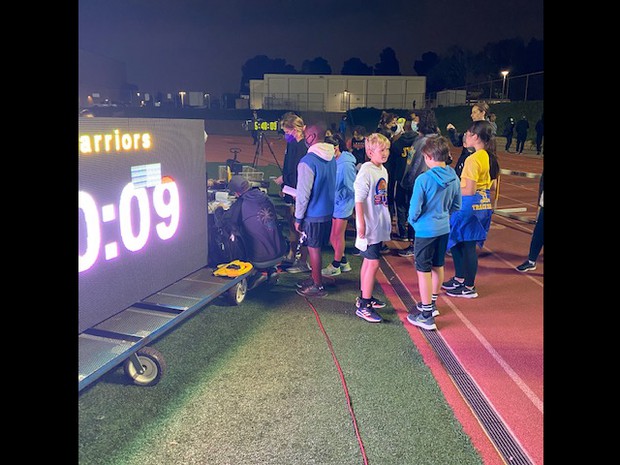 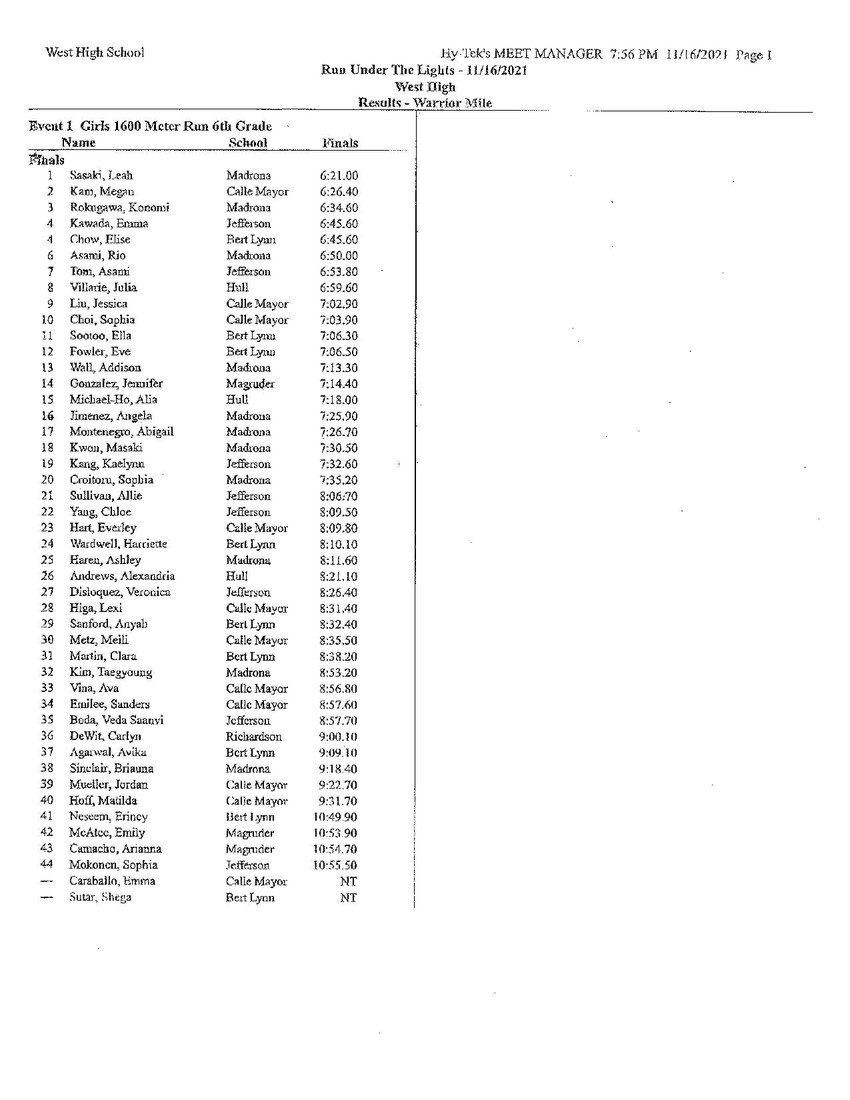 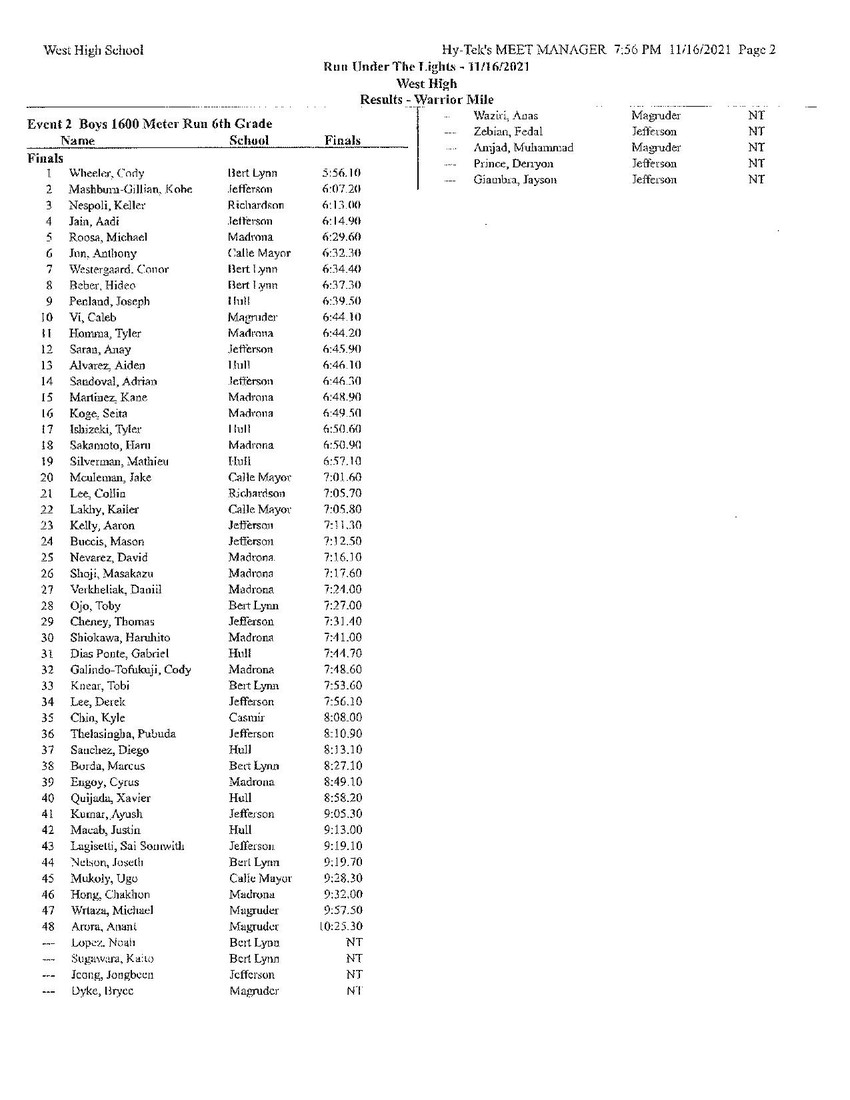 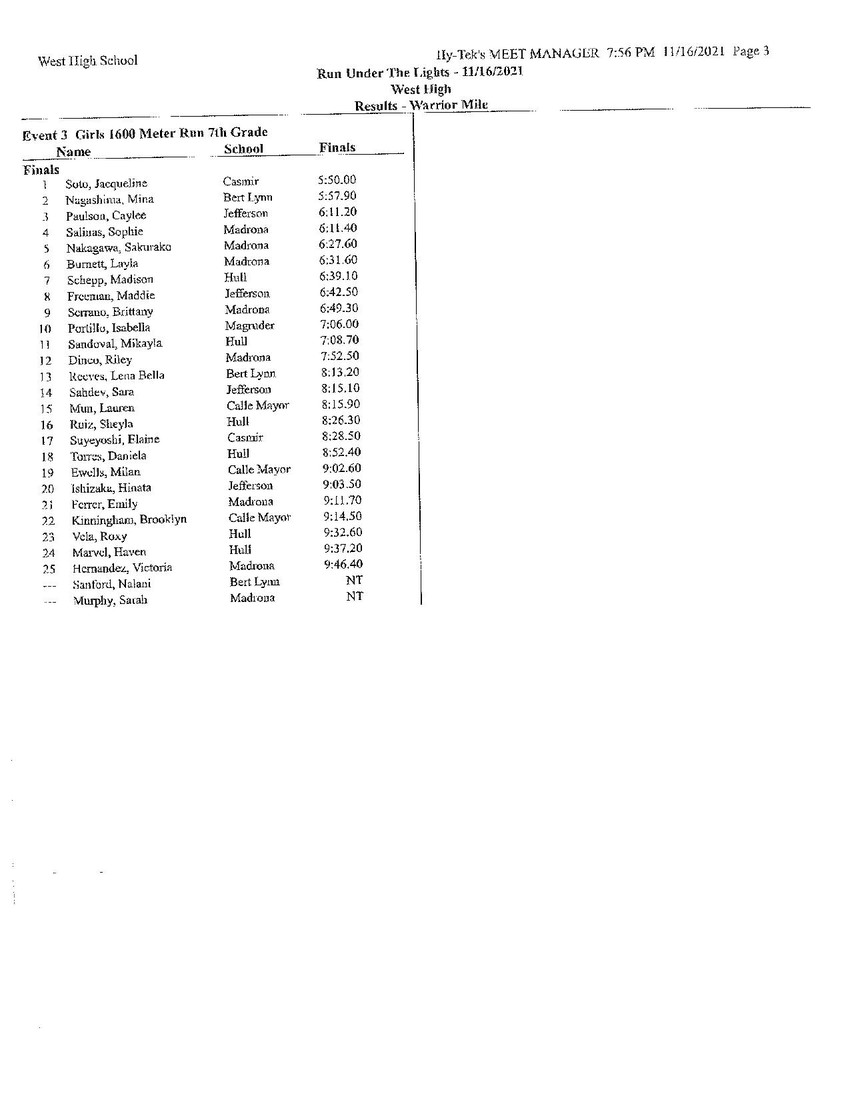 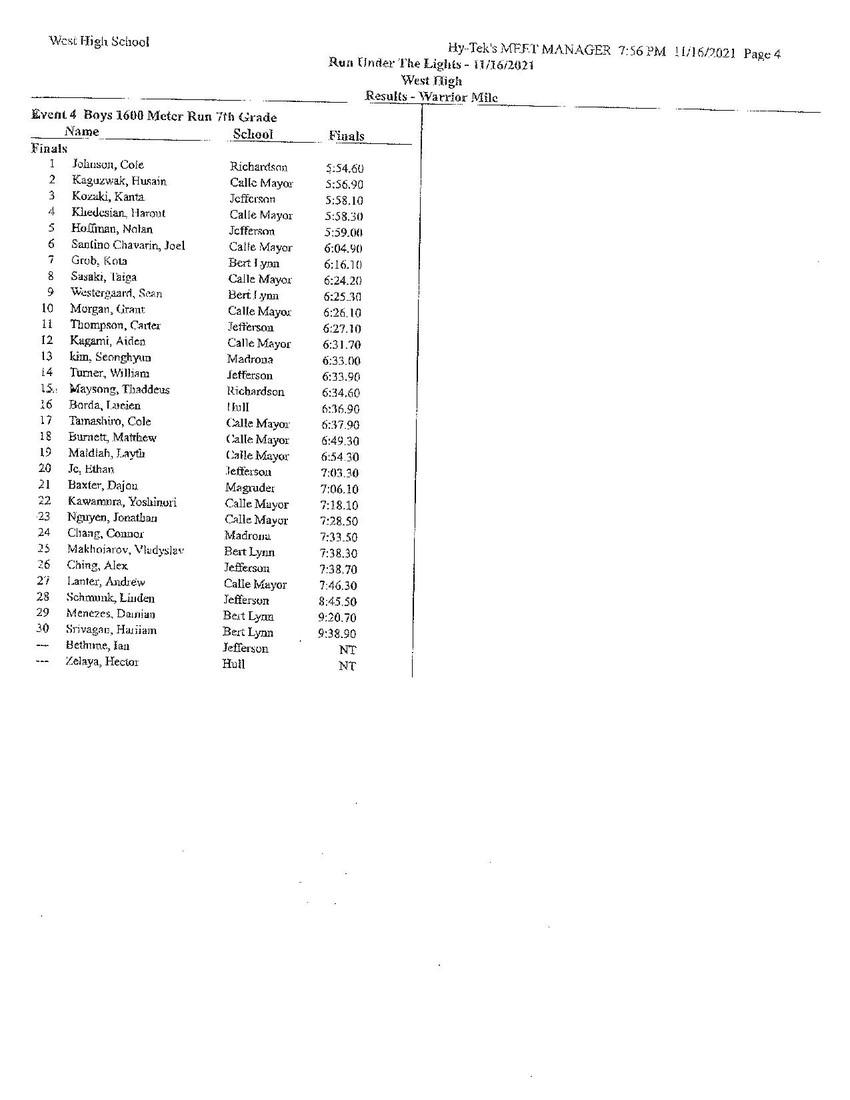 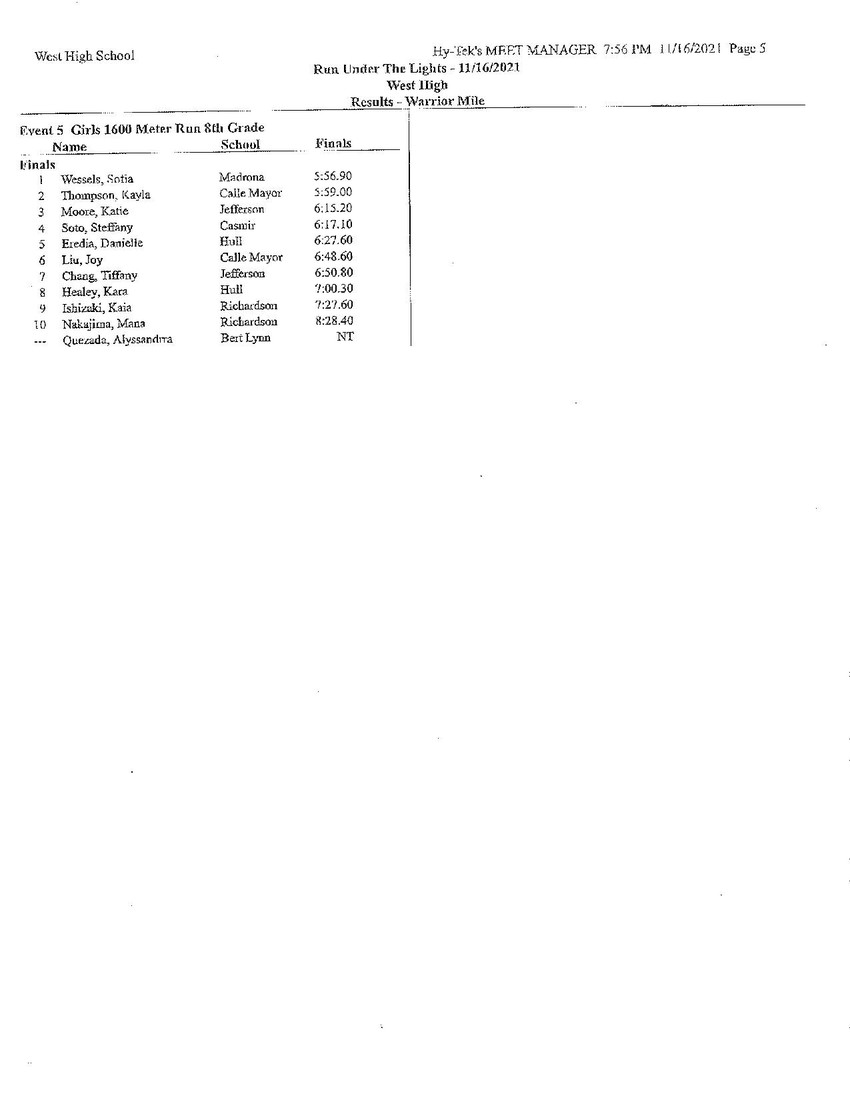 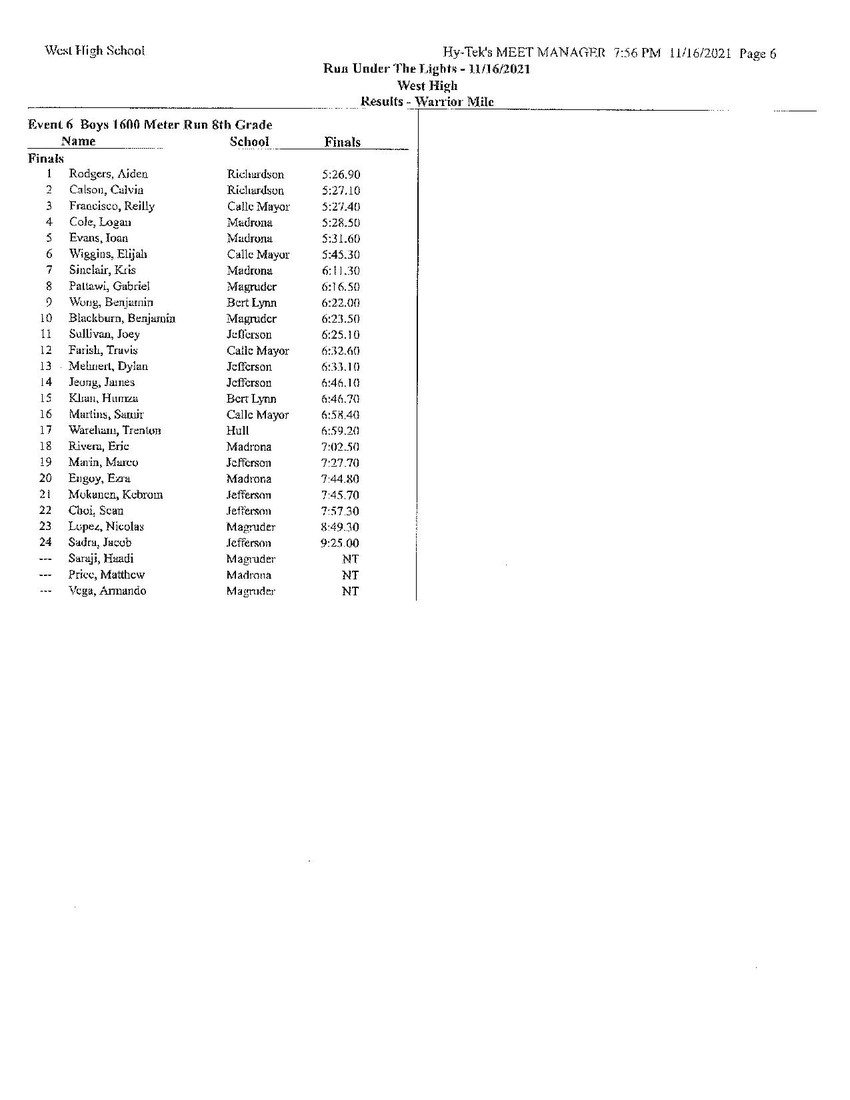 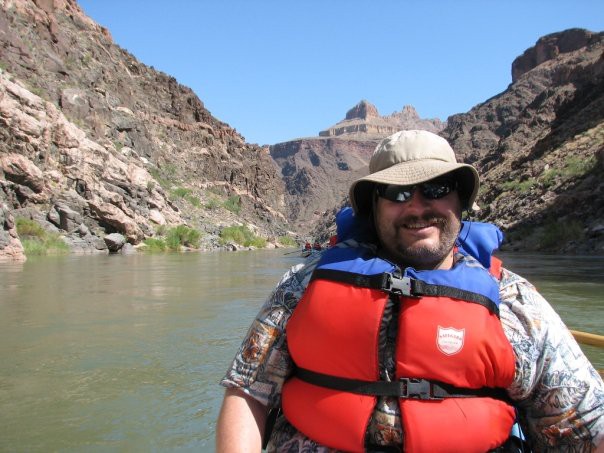 Mr. Marx on one of his many white-water rafting trips through the Grand Canyon.

Mr. Marx started here in 1998, when he was hired along with Mr. Osborn and Mr. Sanders. Throughout the course of his career, he taught English, a social studies class here and there, was advisor to the Magic Club, and edited the yearbook for years.

It is estimated that Mr. Marx inspired over 5,000 students. If one were to multiple 200 students over 25 years-- that's a lot of students he encouraged to 'question authority' and 'leave your mark.'

Mr. Marx is survived by his parents (Oscar III, Julie), brothers (Oscar IV, John), nephew Oscar V, niece Kat, a new great-niece, thousands of Bert Lynn students and their families, and countless friends who mourn his passing. Tributes and other services are pending. 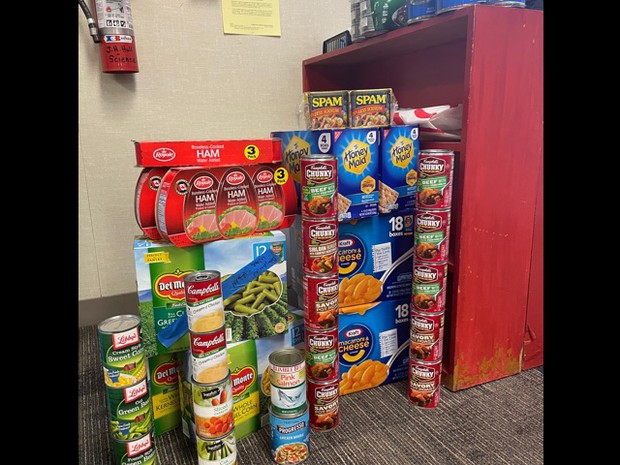 Mr. Marx encouraged us to be bravely unique. He pushed us to be our best selves, and taught us to believe in magic. He rooted for the underdog, and never let us give up. He boosted us up when we needed him (figuratively and literally, as proven on our class trip to DC), and repeatedly showed us the importance of laughter. It takes a special soul to teach the young minds of our world, and his memory will never be forgotten by the many, many students he shaped. “Alex, what is gratitude?”

Thank you for being an amazing teacher throughout the years. I have learned so much from you, from English information to tips on how to be a good person. I looked up to you and all of the love and energy that you put into your teaching. Thank you for leaving a lasting impression on my life, as well as, the lives of countless others.

I was so saddened to hear about the loss of one of my favorite teachers, Lincoln Marx, last week. I am so incredibly grateful to have been his student. From the life lessons he taught us through literature like Fahrenheit 451 and The Giver; to having us write letters as 7th graders to our future selves (which he mailed, and we received right before high school graduation!), to the penny wars (which we proudly won my year); to the famous village people at our eighth grade graduation— he has had such profound impact on my life and the lives of others. Even after a decade, there are so many memories that have stayed with me all these years. Most importantly, he encouraged all of us to “leave our thumbprint” on this word. I wrote my college essays on this topic, and have tried to do just that, now working with students of my own.

If there was one thing Mr. Marx loved, it was humor. Every time you’d see him he’d have a funny joke, interesting story, or witty quip. He was always very happy when you would get his jokes, however lame he would admit they were. He told his students for years that his ideal funeral would be one full of comedy. “People are always really sad at funerals,” he would say, and then tell his students the various ways he’d want his own funeral to be livened up: someone dressed as the grim reaper standing ominously at the entrance, a recording in the coffin repeating “Help! Let me out!”, and the organist playing “Pop Goes the Weasel” at the end of the service, stopping at the last note, leaving the mourners to hope nothing would pop out of the coffin.

Mr. Marx loved his traditions too, especially if they were humorous. Every year he would make his students jump out of their seats by yelling the first line of Tom Sawyer. He had his students shave his head for Pennies for Patients, and swore that he’d never let them shave his beard or eyebrows. He could knock on his skull and make a funny, hollow noise, and would laugh with satisfaction as his entire class would hit their heads trying to follow suit. I enjoyed his class very much. There was something very cozy about starting the day in his classroom: the warm smell of the heater and microwavable bacon in the air. That year I discovered a great love for Dystopian stories among The Giver, The Exiles, and Fahrenheit 451. At the end of the year, I gave Mr. Marx a novel of my own, not realizing until later how dreadful it was (somehow my book skipped over a chapter eight…). A few times I offered to take the book back or said it was alright if he wanted to throw it away, but he dismissed what I said instantly, promising that when I became a famous author, he would bring this copy for me to autograph, as it showed how far I’d come.

I’m sorry that he will never see if I do become a famous author. But I’m grateful that he looked over my flaws when I was in his class (as I was rather snarky and obnoxious sometimes), and saw me for what I could become.

We talked about legacy a few times in his class. He would stamp his student’s foreheads with his thumbprint one day during the year, giving them the “Mark of Marx” before sending them out of the classroom to begin fighting what he called “The War on Stupid”. When students would use the word “nice” as an adjective he would say that being nice was “the worst thing someone could ever say about you.” He told us his philosophy was that if someone went to your funeral and the only thing they had to say about you was that you were “nice”, then what had you accomplished? He talked about the importance of the seemingly meaningless stories he told in class, saying that his memory would live on in these funny stories after he was gone. “And me...I’m gonna live forever” he once said, referencing the memories of him we would keep with us, and pass on to our own children.

And Mr. Marx will live in our memories for a long time. He was a very kind (not “nice”) person, generous, and endlessly humorous. For me, he looked over my current flaws, and beyond to the great things I could do. His students and friends admired his humor and advice, and hold fond memories of him that they will tell their children and grandchildren. For, as it was written in The Giver, “Memories need to be shared.” 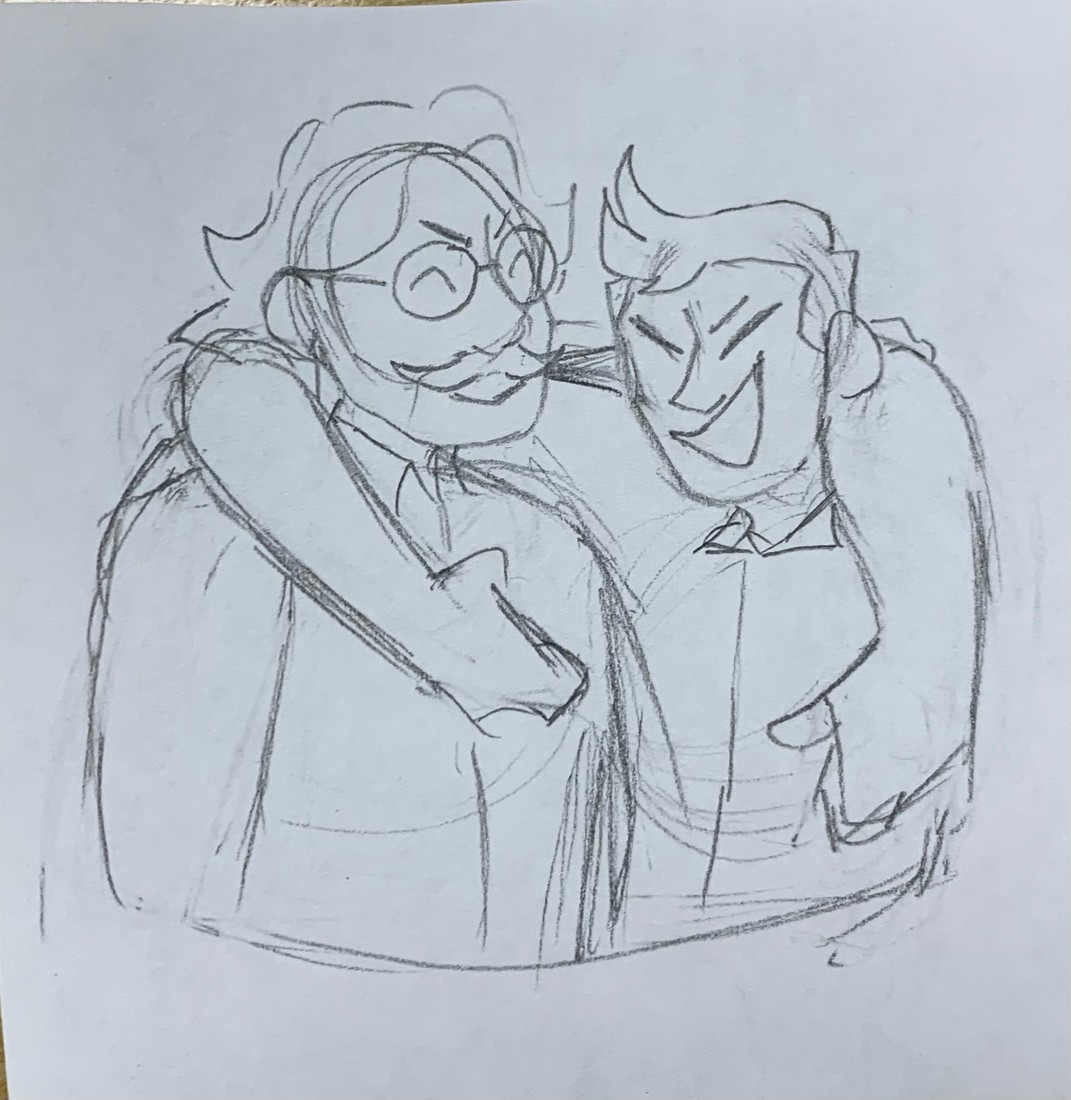 I would love to share how fortunate I have been to have had a friend in Mr. Marx for 21 years.

Mr. Marx and I created Renaissance Day for the 7th grade 18 years ago. We spent countless

hours and years planning and executing the program. I remember the day we decided to drive

to the Renaissance Faire in Irwindale. We had such a memorable day studying the period and

interacting with guilds. After interviewing many guilds, we chose one to perform here at

Bert Lynn. Those memories will stay with me forever.

Mr. Marx will be greatly missed but will always have a special place in my heart.

Lincoln was an amazing teacher, who did so much for his students and left a lasting impact on their lives. He was a great person to work with, I will miss his sense of humor and seeing him greet his students as they walked through his door. He was a great presence on our campus and it will be greatly missed. I am so happy and honored that I had the opportunity to know and work with him all these years. As Lincoln would say, "Welcome to Torrance!" Lincoln will truly be missed but always remembered, until we meet again!

I had the privilege of knowing Mr. Marx ever since I was born because my dad was his colleague and good friend. He would always start off the day in class with a riddle and was always in a good mood. I loved his hearty chuckle when anyone told a bad joke “Never give the man you’re about to arrest a flamethrower,” Mr Marx once told our class while reading Fahrenheit 451. That was one of my favorite times of Mr. Marx’s class. He always had a great sense of humor and told so many great stories. He was an exceptional teacher and a very kind and generous man. He once asked if some students could help him reorganize his bookshelf. There was no incentive or any other reason for students to come. When we had finished, he gave us each 10 dollars just because we had taken a few hours out of our day to help him. I will never forget his amazing teaching, his stories, his kindness, and his generosity. 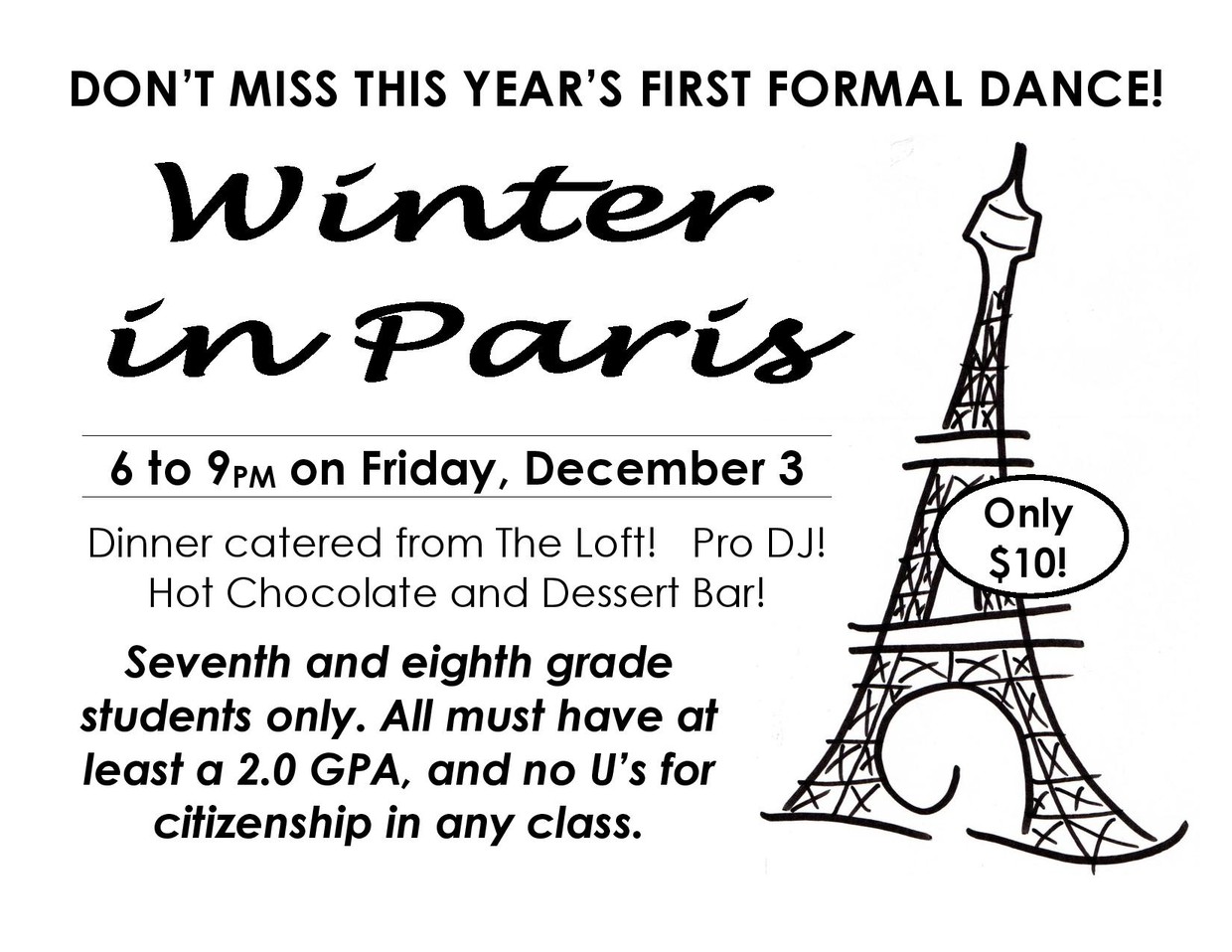 AROUND CAMPUS ASKS: "WHAT ARE YOU THANKFUL FOR?" 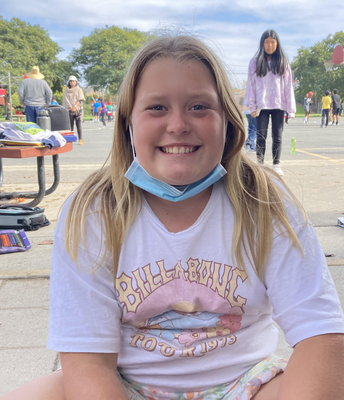 "I'm thankful for my parents and school." 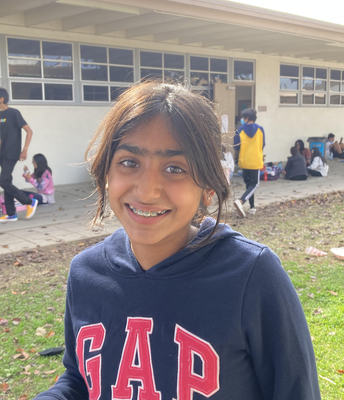 "I am thankful for my family and friends." 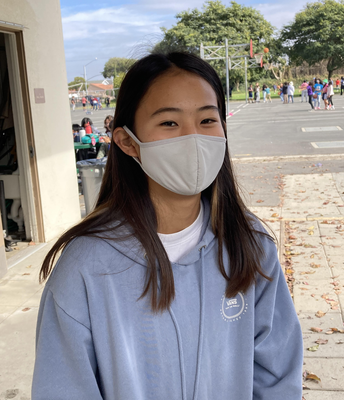 "My friends and family" 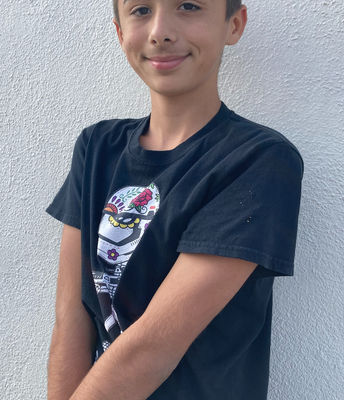 "I'm thankful for my family, my friends, and my dog." 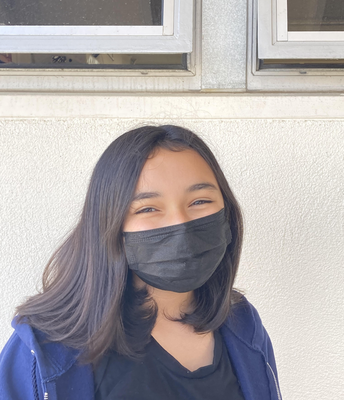 "I am thankful for woman rights." 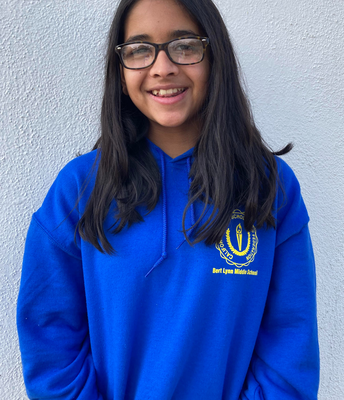 "My friends and my family" 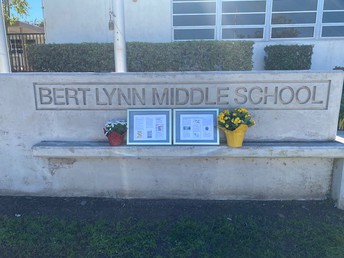 Thank you to 7th-grader Ava Leininger and her family for starting this wonderful tribute! 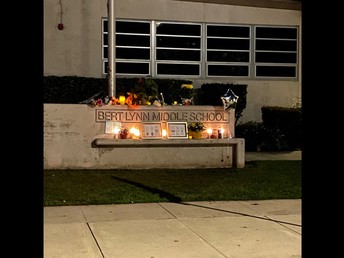 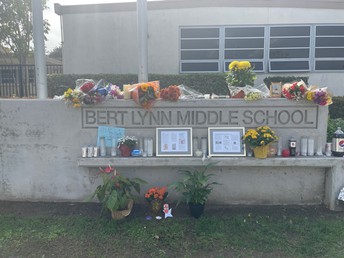 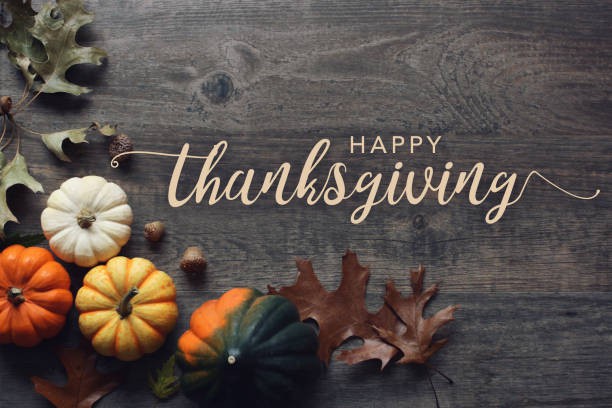 Gobble 'til You Wobble!

Thanksgiving break is Monday, November 22- Friday, November 26. Enjoy your time off and help with the dishes!
Embed code is for website/blog and not email. To embed your newsletter in a Mass Notification System, click HERE to see how or reach out to support@smore.com
close