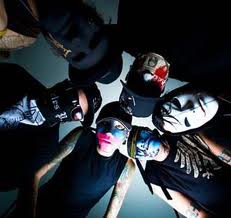 The band originated in 2005 from a song titled "The Kids" that Jorel Decker (J-Dog) and Aron Erlichman (Deuce) posted on the band's MySpace profile to positive reviews, leading them to form the group Hollywood Undead with their friends "Shady" Jeff Philips, George Ragan (Johnny 3 Tears), Jordon Terrell (Charlie Scene), Dylan Alvarez (Funny Man), and Matthew St. Claire (Da Kurlzz). In an interview with Shave magazine, J-Dog explained that when forming the band "Whoever was in the room at the time and played an instrument was in the band. Shady Jeff later left the group reasons currently unknown to the public. He currently works as a mechanic and is working on converting diesel cars into vehicles that can run on vegetable oil.
Hollywood Undead-S.C.A.V.A.

Follow Jarrod Sevil
Contact Jarrod Sevil
Embed code is for website/blog and not email. To embed your newsletter in a Mass Notification System, click HERE to see how or reach out to support@smore.com
close