The process by which carbon is cycled between the atmoshphere, land, water, and organisms. Producers convert carbon dioxide into carbohydrates during photosynthesis. When consumers eat producers, the consumers obtain carbon from the carbohydrates. As the consumers break down the food, some of the carbon is released back into the atmosphere as carbon dioxide. Carbon is also released into the atmosphere through cellular respiration from both producers and consumers.

The process in which nitrogen is cycled between the atmosphere, bacteria, and other organisms. Nitrogen-fixing bacteria live within nodules on the roots of plants. The bacteria uses sugars to produce compounds that contain nitrogen and the excess nitrogen is released back into the soil. Plants get nitrogen from the roots or from the soil. Animals get it by eating plants or other animals. 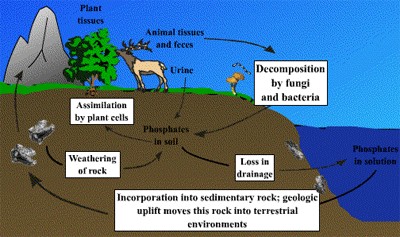