How to Bicycle to the Moon to Plant Sunflowers 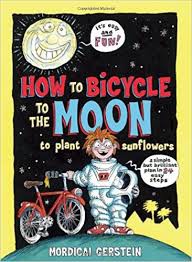 The main character in this story is an inventor who has a big, and I mean BIG, concern! He thinks the moon looks sad and lonely. He hatches a plan to bicycle to the moon and plant sunflowers. After all, sunflowers are about the cheeriest flowers ever! Surely the moon's frown would turn upside down if if there were sunny sunflowers there! The plan is 24 simple, creative, and zany steps using a garden hose, a borrowed space suit, and lots of creativity. 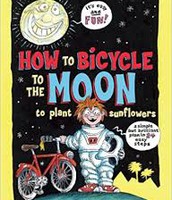 To celebrate our January Book of the Month, you are invited to participate in the Crazy Catapult Challenge. In this challenge you will design and build a catapult that will launch an object of your choice to simulate a meteorite into a model of the moon. Winners will be determined by measuring the width and depth of the impact crater. 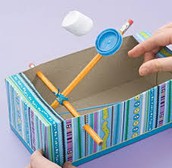 You may use whatever recyclable materials you want to build your catapult. Purchased catapults will not be accepted. The catapult must be free-standing. You may support it with your hand by holding it down when you launch but it can not be taped down or held and must stand on its own when not launching.

Here are some suggested materials:

You may use whatever you want to represent your meteorite but your catapult must be able to launch it a distance of 10 feet into a model of the moon that is approximately 10-12 inches tall. Meteorite MAY NOT exceed the diameter of a tennis ball. No rocks allowed.

Craters will be judged on a measurement of their width and depth. Contestants will have 2 attempts and judges will take the best of their 2 attempts.

Scholars will launch an object of their choosing to represent a meteorite from their catapult into a model of the moon to create an impact crater.

To compete, scholars MUST submit a design plan. Pick up a copy of the design plan form from your teacher or from Mrs. Wagner in the library.