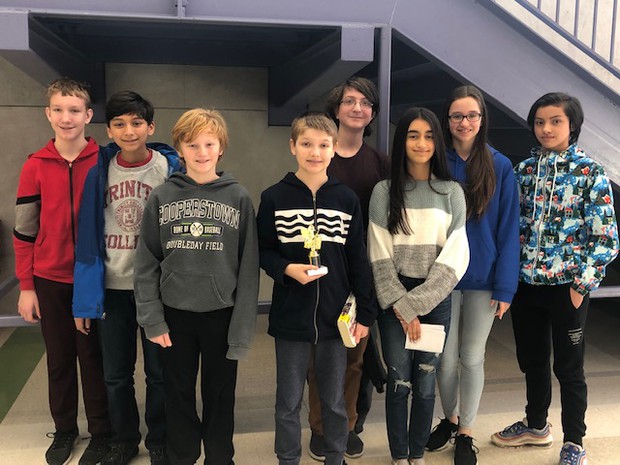 On Thursday, December 12, eight Central School students participated in the School Consortium of NJ Spelling Bee at Delbarton. The eighth graders who competed in the Varsity rounds were Lana Chasen, Sophia Ehlert, Kevin Feinstein, and Matthew Weddle. The seventh graders who competed in the Junior Varsity rounds were Ryan Dowd, Armaan Lerner, Brandon Wozniak, and John Wozniak. These students were the finalists from the spelling bees in their Language Arts' classes. Mrs. Pogash accompanied the Central students, and five other schools competed, including Delbarton, Morris Plains Boro, Morristown Beard, and Oak Knoll. Above is a photo of this year's spellers. L-R: John Wozniak, Armaan Lerner, Ryan Dowd, Brandon Wozniak, Kevin Feinstein, Lana Chasen, Sophia Ehlert, and Matthew Weddle. All of our spellers did well, and Brandon Wozniak is holding a trophy for winning third place on the Junior Varsity Team! Congratulations!

On December 11th and December 12th, the Central Middle School Jazz Band performed in the school’s Annual Winter Concert. Conducted and taught by the excellent band and music teacher Ms.Varner, the Jazz Band this year consists of 6th, 7th, and 8th graders. They played the songs “Caravan”, “Route 66”, and “Don’t Stop Believin." The jazz band consists of Hannah Laufer and Julia Zurawsk on flute, Urmi Banurjee and Aadya Bharadwaj on clarinet, and Samantha Clark, Sophia Ehlert, Jacob Fullman, Jillian Gaydos, Anton Levonian, Mason Moran, Vanya Pankratov, Alexandra Walec, and Elizabeth Yautz on saxophone. There were also 4 trumpets, including Byron McCann, Ethan Moran, Matthew Quinn, and Julian Vignes. The trombonists were Kevin Feinstein, Michaele Galati, Daniela Guevara, Aubrey Jungels, Jessica Szekeres, which were three more than last year. In the rhythm section, Lana Chasen and Sebastian Viegas were on the piano, and Thomas Amburan was on the drums. With such talented musicians, an astounding conductor/teacher, and great song choices, we can also look forward to the great show they will put on in the Spring! 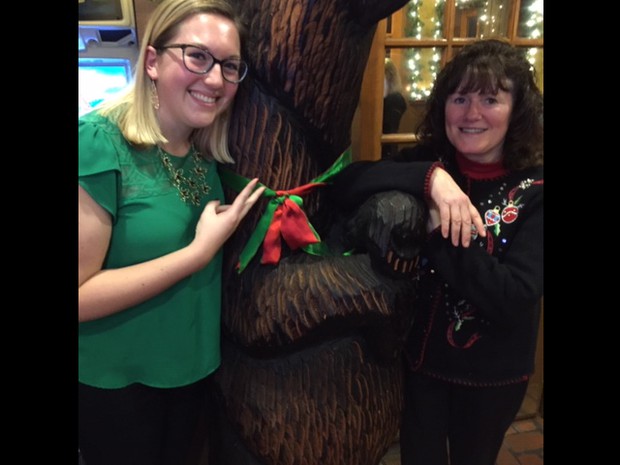 Central School’s seventh and eighth grade band and jazz band presented their Holiday concert to the school and to their families on December 11th and 12th. These students practiced and perfected their parts for three months leading up to this festive performance. The seventh and eighth grade band performed the pieces “An English Christmas,” “Hanukkah Highlights,” and “Sleigh Ride” to celebrate the upcoming holidays. The jazz band’s theme to each song they played was a journey. They preformed pieces all related to the common concept of journey, whether the song was based on a trip or written by the band, Journey. The jazz band played “Caravan” featuring Aadya Bharadwaj on clarinet and Jacob Fullman on tenor sax. They also performed “Route 66” featuring Aadya Bhardwaj on clarinet and Mason Moran on alto sax, and “Don’t Stop Believing” featuring Jillian Gaydos on alto sax. On behalf of all the students in band, thank you, Ms. Varner, for all the effort you put in to make our band sound excellent! 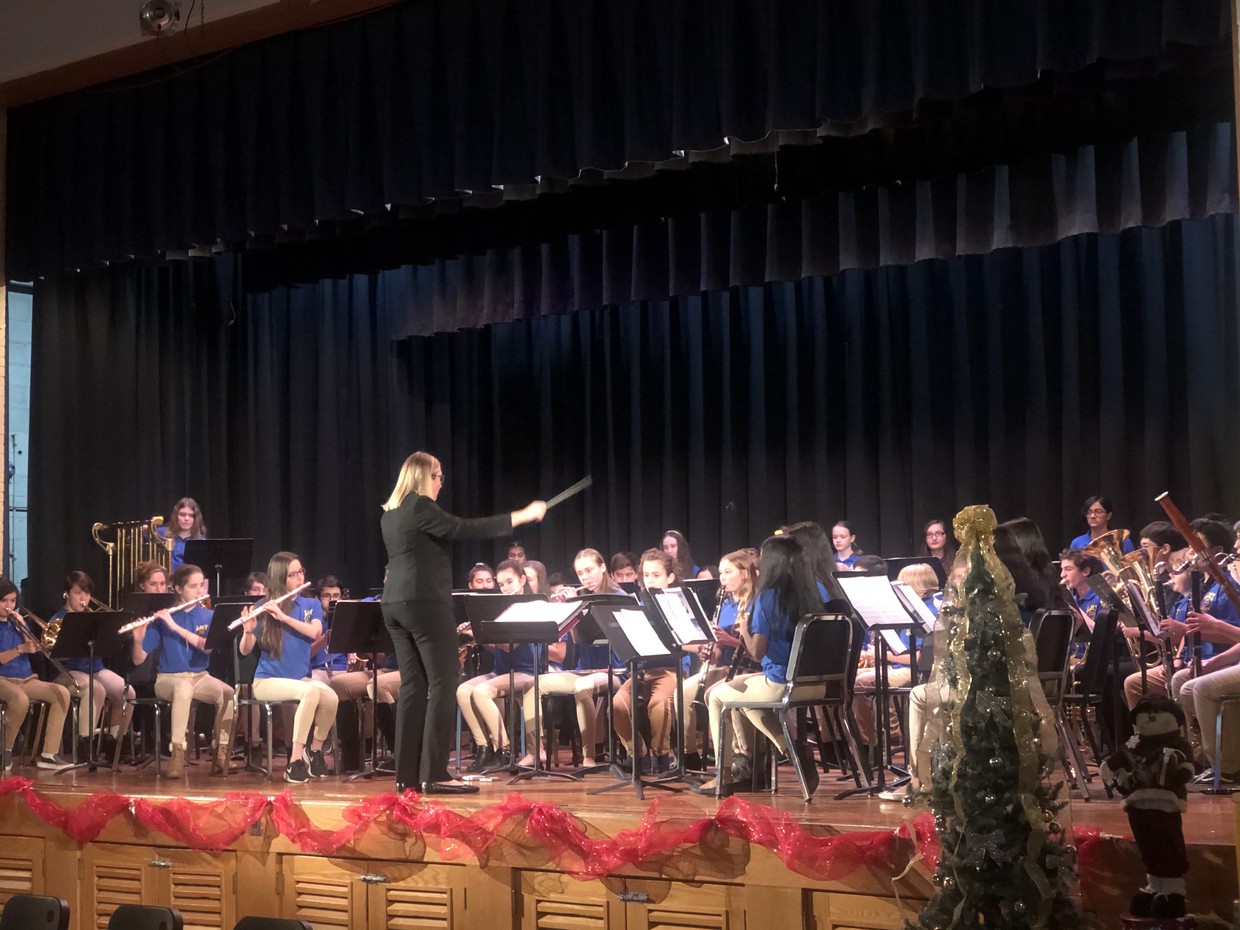 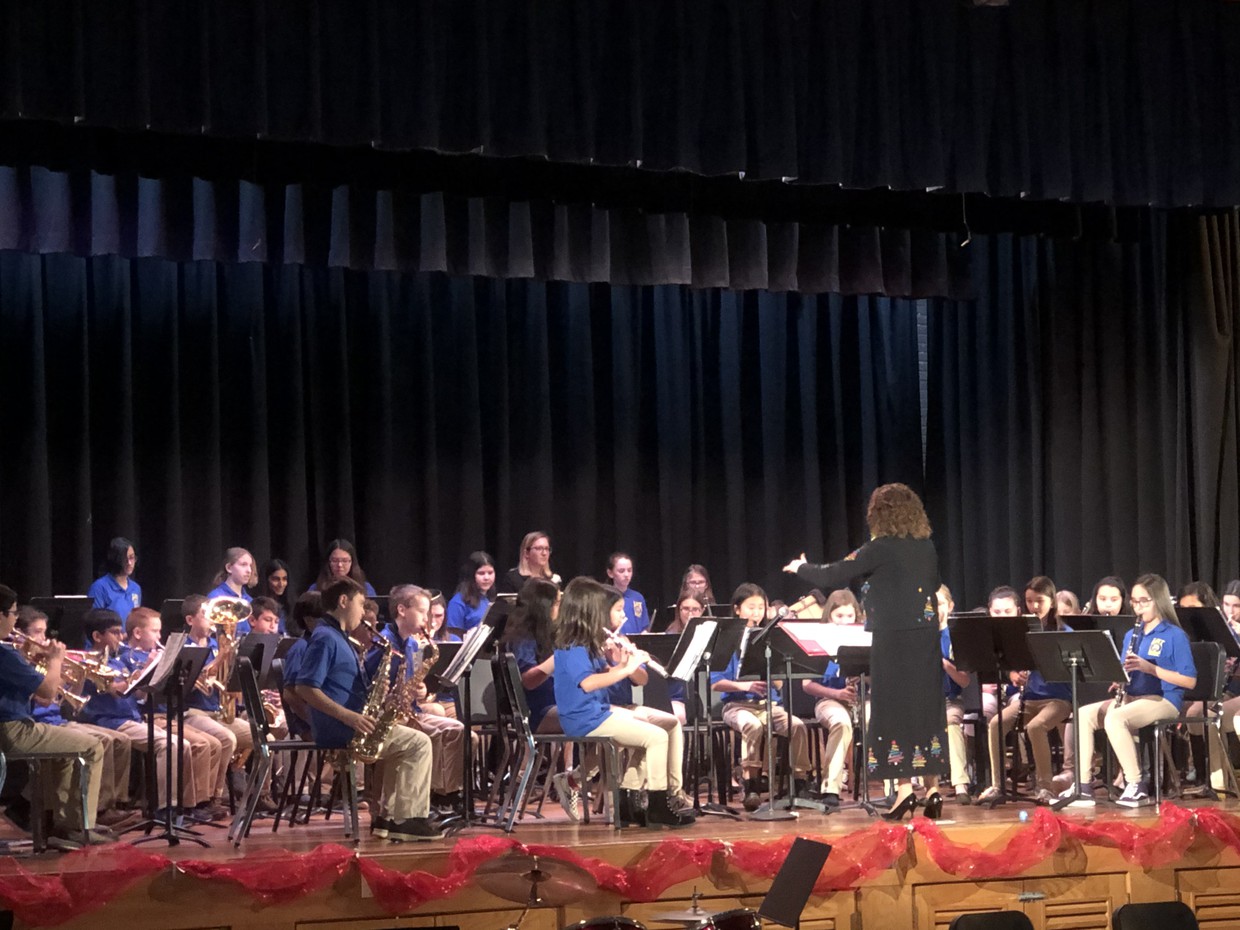 December 22nd will be the first day of Hanukkah this year, an important holiday for American Jews. Though it is well known throughout the country, its traditions and many other things remain unknown to most. The celebration of Chanukkah is very common for Jews across America, though it is relatively unimportant in Israel, It has become important for the American Jewish community. The actual reason for the holiday is a celebration of the Jewish people fighting and rebelling against their rulers, who had sacked and destroyed the First Temple in Jerusalem. Along with it came a story about the 8 candles. The Holiday takes place over 8 days (sundown to sundown), each day lighting a new candle with the tallest of the 9 in the middle, called the “Shamash”. One would light these candles right to left just after saying three hebrew prayers for the first night, and two for the rest of the nights, while wearing the small hat known as a armulka (yah-mah-kah) in Yiddish, or Kippot (Keepah) in Hebrew. Some families have a nice dinner on the first night or another, maybe multiple dinners. The tradition of opening presents would come during the celebration. However, this is only an American tradition, coming from the fact that many of the children in the school would receive Christmas presents, the Jewish children would most likely feel left out, so many people started doing gifts for the whole family, which has continued to this day. However, as many will attest, the best tradition of all, the Ashkenazi (Eastern European Jewish) tradition of eating the arguably best food of all time, Latkes, also called by the non-Jewish name of “Potato Pancakes”. Although this might seem like the most important holiday on the Jewish calendar, it is not. That would be Rosh Hashanah, Yom Kippur, and Passover. Despite this, Chanukkah has become a symbol of Jewish representation and pride in America, something that has been needed for a long time here, and still is throughout the world. Although Chanukkah is not religiously the most important holiday, it is a truly special time for the American Jewish community.

Christmas Is Just Around the Corner

Santa will soon be coming down your chimney, are you ready? Have you decked the halls for this merry holiday? Well, you should have, because it is coming soon. Christmas Eve is on December 24th, and the spectacular Christmas Day is the 25th! Christmas is a time of being with loved ones and celebrating family traditions, such as giving and receiving presents, tree decorating, making gingerbread houses and baking Christmas cookies,, the "Elf on the Shelf," advent calendars, listening to Christmas music, and so much more. However, we should not forget the birth of Jesus, which is the true meaning of Christmas. Merry Christmas and Happy Holidays!

Many people have heard of Kwanzaa but do not celebrate it or know much about it. Kwanzaa is an African-American holiday created in the 1960s. It is traditionally celebrated from December 26 to January 1. On the night of December 31, there is a feast called, Karamu.

Kwanzaa was created by Dr. Maulana Karenga of Los Angeles in 1966. He wanted a way to bring African-Americans together as a community. The name comes from “matunda ya kwanza” which when translated from Swahili to English means “ first fruits”. Kwanzaa has seven basic principles - unity, self-determination, collective work and responsibility, cooperative economics, purpose, creativity, and faith.

There are also seven symbols. Mazao, or the crops, is important because they are the main source of food. The Mkeka, or the place mat, symbolizes the foundation their ancestors built for them to grow on. Vibunzi, or ear of corn, represents fertility. Mishumaa Saba, or the seven candles, represent fire and light. Kinara, or the candle holder, represents ancestors. Kikombe Cha Umoja, or the unity cup, is used to honor the dead who stay with the earth they tilled. Zawadi, or gifts, are used to encourage growth, self-determination, achievement, and success.

What did Long Hill robotics team do at the first competition of the season in Cherry Hill NJ?

How was the competition set up?

Who were on the teams that competed for Long Hill?

How was the tournament structured?

“In the first half, called “Skills”, each team competes on their own. And in the second half, called “Teamwork”, they are teamed up with a random team for each run. The teams also had to be interviewed by the judges and explain their engineering notebooks”

What were the results of the competition?

What’s next for the Long Hill robotics team?

“We have two more tournaments coming up. One on January 11th, in Linden NJ. And the other on January 25th, in Tinton Falls NJ.”

The Central School Fencing Team has started out with bang, consisting of one of the largest fencing teams ever in the school. There are 24 people currently on the team, consisting of Sammy Aschoff, Aadya Bharadwaj, Kevin Feinstien, and Durga Shylesh from the eighth grade, Colin Belfield, Luke Dorsi, Roman Elizagrey, Nick Farley, Cathrine Lavender, Armaan Learner, Alex Martini, Alex Moakley, Ethan Moran, Isabella Sluyter, John Wozniak, and Thomas Ziegler from the seventh grade, and Sean Baker, Caelan DaVine, Micheal Ehlert, Nathan Ginese, Janna Han, Travis Kosempel, Antonio Pincay, and Zavier Shires from the sixth grade. The coach, as always, is the great fencer Eric Kirberger, and he is excited to see how this promising team will do in the future!

On December 9th, the Central girls' basketball team played Valley View Middle School. Both teams were well-prepared for the game. As the game started, both teams were tied at 2, but the girls pushed on. Early into the second quarter the girls made 6 baskets and got the score to 8-2 but Valley View quickly made some plays and got it to 8-7. Throughout the game, the score went back and forth. By the 3rd quarter, the score was 22-13. The tiger mascot for this game was Kyle Cooke, who really helped the crowd get excited. The Central girls won the game 35-18. Great job girls!