Join in #AvonTeach Wednesdays at 9pm

Join in #AvonTeach Wednesdays at 9pm 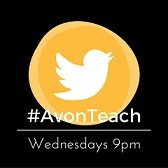 A Twitter Chat is a virtual gathering of people coming together to discuss a common theme, in this case connecting with a hashtag. There is a moderator who presents the format and topic questions for the duration of the chat, always using the chat hashtag in each tweet. A Twitter chat lasts about an hour and you get out of it what you put into it. Certainly following and reading the tweets can be insightful, often referred to as "lurking." When you are ready, below are some tips to help you navigate the chat and join in the conversation.

Pick your platform. Choose to follow the chat using the Twitter.com website, or try a tool like Tweetdeck or Twubs. To follow a chat, search for the hashtag or make a column for the hashtag in Tweetdeck. Below is an example of Tweetdeck with columns, new tweets show at the top of the columns. The #AvonTeach column will show all the tweets for that specific chat and hashtag.

Tweetdeck is great for organizing the waterfall of information on Twitter. Make as many columns as you need, or just one for the chat you are following. 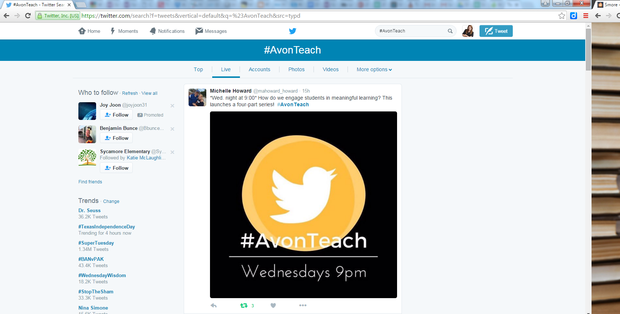 This image shows how to search a hashtag. Notice under the blue bar there are different choices to click for the hashtag, select "Live" to see ALL the tweets during a chat. New tweets will display at the top of the feed.

Twitter chats have a moderator who will tweet out introductions, the format for the chat, and the topic questions. Be sure to introduce yourself to the chat, and remember to always use the hashtag for the chat.
Twitter Chat Moderator: 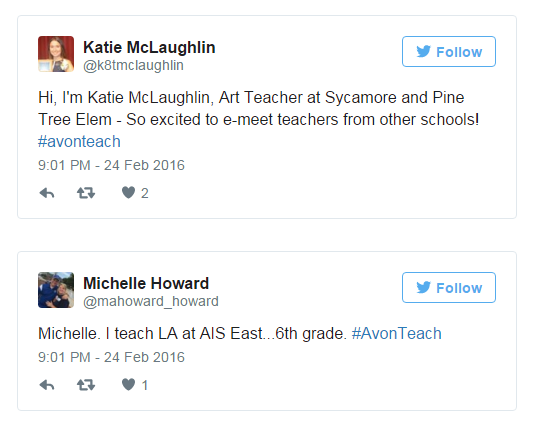 Participating in the chat questions

During a Twitter chat, the moderator will tweet out the format for the chat. Usually it's posed as Q1, Q2, for Question 1 and Question 2, and so on. To answer the question, compose a new tweet and use A1 (or the corresponding question number) as Answer 1. Remember to use the chat hashtag in your tweet so others can see it. Here are a few examples below. 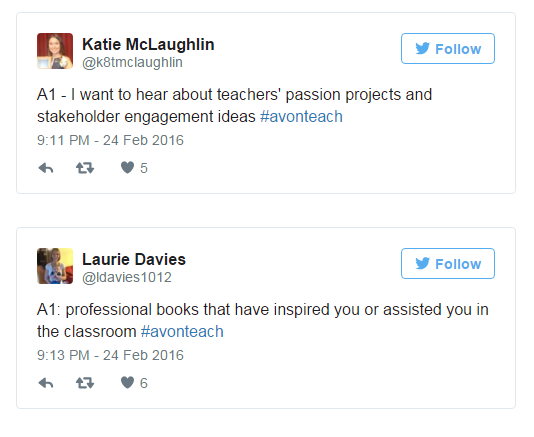 As with any gathering or conversation, you get out of it what you put into it. If someone shares something you agree with, you might favorite their tweet using the heart icon, or feel free to RT (retweet) it, or you could reply to them and express your thoughts (remember to use the hashtag!). It's perfectly acceptable to have conversations with other users during a Twitter chat!
Example for a Reply to a Tweet (using the left arrow icon): 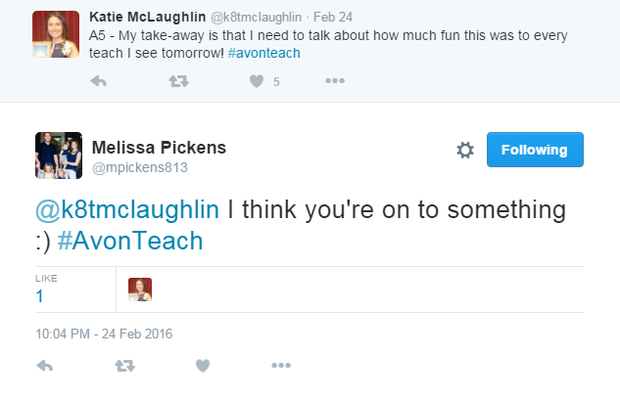 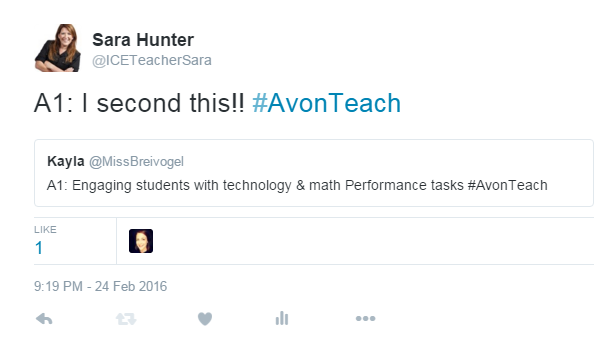 Miss the Chat? Look for the Storify!

Twitter chats are often archived using a great tool called Storify. A Storify of a chat puts the tweets in chronological order during the time period of the chat and into a readable format. You can find the archives for our #AvonTeach chats here. 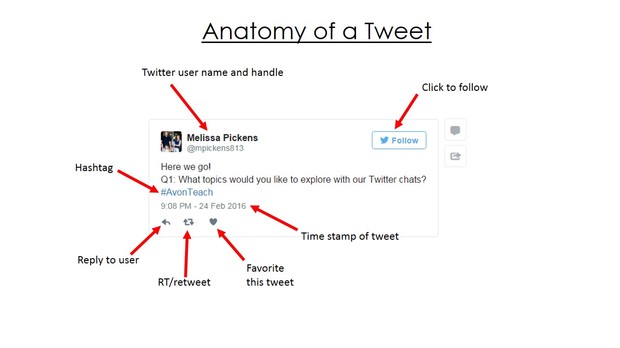