Macy is using Smore newsletters to spread the word online.

Get email updates from Macy:

Macytopia is a new country that will have an amazing government. Macytopia will be a autocracy totalitarian dictatorship. An autocracy totalitarian dictatorship is when one person leads the government not letting the people of the country participate in any part of the government; that one person will have control over every aspect of their citizen's lives. Some examples of what the ruler will control in your life are the number of kids you can have, the job and pay you will get, the person you marry, and the type of life you will live. These are just a few examples. The leader of this country will get to make all the decisions for the country and the people will have no say in what happens in the country. This will also be a unitary government which means that all of the power lies in the capital city where the ruler is. Macytopia can only be a unitary government because we are a dictatorship and one person rules all so no power will be distributed. With our government being formed the way it is there will also only be one political party that is excepted and that is the political party of which the leader is and wants.

Macy Gudenkauf is the leader of Macytopia. She will make all decisions and rule every part of the government and most aspects of your life. She is the reason that our government will be such a success and the reason you will have a much better life!

Everyone in Macytopia will speak one language and that one language will be English. This is to make communication much easier throughout the country and because it is the leaders native language. 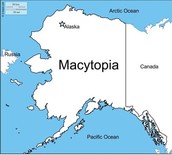 The Location of Macytopia and It's Capital

This map shows you where Macytopia is located in the world and where the capital city is within the country.

Macytopia is located where the state of Alaska, which was part of the United States, was located. We border part of Canada on one side and the rest of the land is bordered by the Pacific and Arctic Oceans. Russia is not far across the ocean from Macytopia. The population of Macytopia is 736,732. The capital city of this country is Alaska in respect to it's former being. Alaska is the only major city in Macytopia and the rest of the land is rural with some very little towns throughout. Our natural resources are oil and lumber.

Other Important Information About Macytopia

The country of Macytopia is a country that is very much at peace and does not have conflict because they all love their leader and think there is no better way to run a government for a country. If they decide to go against what the leader is saying they will be removed from the country. Macytopia is allies with Russia and North Korea because they have very similar governments, leaders, ad ideas. We are enemies with the United States and Canada because they are a democracy and give their people a lot of freedom which is not what we believe in.

Macytopia also has a communist economy which means that Macy will choose everyone's jobs for them and everyone will except equal pay. This will make us a very wealthy country because all people will be employed by a certain age. The job a person has will depend on their talents and abilities. All people will receive the same education when they are younger. Our poverty level will be very low because everyone has to be employed and all people will receive the same wages so everyone can afford an equal life style.

Macy is using Smore newsletters to spread the word online.