tate is using Smore newsletters to spread the word online.

Get email updates from tate:

Around 100 people came to Jamestown hoping for fortune and a new life, once they got there they were struck with diseases and famine. They settled in an area covered in marshy lands that had a hot and humid climate with mosquitoes roaming everywhere. The mosquitoes carried malaria which the settlers had never seen so they had no immunity to the disease and many settlers were infected. Malaria decimated the colony causing the settlers to become weak with burning fevers and sores and sometimes brought death to settlers. Famine also caused a major problem in the colony causing many deaths and struggles. When settlers first arrived to Jamestown everything was different and they did not know how to survive. The settlers crops did not work in the marshy lands so they were quickly famine struck. The settlers ran out of food fast causing many people to become weak and much more susceptible to diseases. The settlers ate very little but what they did eat was nutritionally sufficient making them weak and sick either way. Jamestown was struck hard at the beginning with new diseases that devastated the settlers and the new land causing old crops to not grow which lead to famine.

This picture shows a man who died from malaria. This helps show how disease was a major problem in Jamestown causing many settlers to die.
http://virginiahumanities.org/2011/11/the-starving-time/

Relationship with The Indians

This picture show how the settlers traded with the Indians and how they had a peaceful relationship.
http://www2.vcdh.virginia.edu/teaching/jamestown/affairs.html 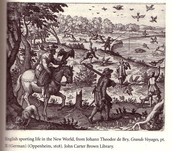 This picture shows how settlers during the starving time had troubles finding food and were growing weak.
http://faculty.umf.maine.edu/walter.sargent/public.www/web%20230/unit%205%20virginia.html

John Smith got the colony back on track with the no work no food policy but was injured in an accidental gunpowder explosion and had to go back to England. This caused Jamestown to have no leader and the settlers began to not follow the no work no food policy so settlers became short on food as they did not work to plant and care for new crops. A new boatload of colonist and supplies sank off the coast of Bermuda which caused the situation to become worse. That winter Disease and hunger ravaged the colony causing hundreds to die. People went to extreme measures to acquire food one man even took to cannibalism, eating his own wife. Once the Starving Time ended only 60 settlers remained out of the 400. The "Starving Time" was a period of hardships as settlers ran out of food and diseases ravaged the colony causing many to die.

tate is using Smore newsletters to spread the word online.