Get email updates from Shawn:

Part of the Federalist party

The Federalist party favored a strong national gov, loose construction, a national bank, and a trading and manufacturing economy 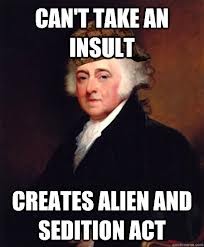 Because of all the political problems the U.S. was having, John Adams blamed in on the immigrants. So he created the alien & sedition acts. These acts were:

2. They could arrest if a citizen was "disloyal"

3. Couldn't trash talk the government (basically no freedom of speech)

While U.S. ships were sailing to Europe to trade, the french were taking American ships and their supplies! This occurred MULTIPLE times. So John found some political geniuses to talk to the french about it. When they arrived, they found 3 french people to talk with. They called them X, Y, and Z (couldn't they pick a better name then letters of the alphabet?). X, Y, and Z told the 3 Americans "Give us money, and we shall stop seizing your ships". The 3 Americans told them back "We would never pay a single penny to a bribe, we would rather pay a fortune for a war!" and left Europe.

2.Continued as the second president (quite a burden if you ask me)

3.Kept America out of the French-British war (that could have been a disaster)

In my opinion, John Adams was an OK president. He dealt with the french bribe and still kept America out of a war. But he was kinda unfair creating the alien & sedition acts. If I were to rate this president, it would be...