Asyndeton is a writing style where conjunctions are omitted in a series of words. phrases or clauses. It is used to shorten a sentence and focus on its meaning. For example, Julius Caesar leaving out the word "and" between the sentences "I came. I saw. I conquered." 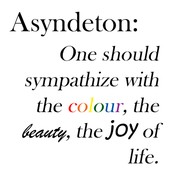 Asyndeton examples may be classified into two types

A. One type of asyndeton is used between words, phrases and a sentence.

B. Second type is used between sentences or clauses.

(Oedipus at Colonus by Sophecles)

Examples of Asyndeton from Literature 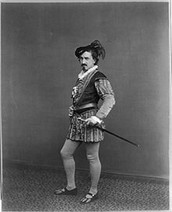 IAGO
Call up her father.
Rouse him. Make after him, Poison his delight,
Proclaim him in the streets. Incense her kinsmen,
And, though he in a fertile climate dwell,

In this extract, Shakespeare has eliminated conjunctions deliberately. There is shortage of “and, for, or, but” which are required to join the sentences. Due to this, the words have been emphasized and feelings of anger and jealousy are articulated explicitly.

“Is whispering nothing?
Is leaning cheek to cheek? is meeting noses?
Kissing with inside lip? stopping the career
Of laughter with a sigh? (a note infallible
Of breaking honesty!) horsing foot on foot?…”

(The Winter’s Tale by William Shakespeare)

Give an example of both types of asyndeton.