Police Are Not Our Friends

Police Are Not Our Friends

*Money can buy the necessary police order. Justice is sold to the highest bidder 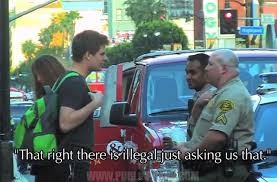 The Police must obey the law, while enforcing the law. There are some corrupt officers out there, but there are many more that are actually abiding to their oath and doing the right thing.

If you do something to possibly endanger either them or the general public, they have to retaliate by arresting you or having to pull their gun out, because it is their job to enforce the laws and protect the people no matter how unreasonable you might think it is.

Laws/Rules That Govern This Belief

Top Five List That Police Are Not Out Friends

5. An officer must abide by his or her oath; if you break a law, they have to enforce it.

4. A man asked his friend, that he knew was a officer, if he could help him to check files to get the phone number of a celebrity, but the officer refused to do it.

3. An officer's girlfriend was speeding; he gave her a ticket.

2. People sleep peaceably in their beds at night only because rough men stand ready to do violence on their behalf. There is a difference between a protector and a friend.