Get email updates from Hillary:

Polio is a virus caused by one of three types of poliovirus. In all cases the virus is contracted by person to person contact. As of today there is no cure, but with the proper vaccination world wide, eradication of this disease is possible in the future.

Up until the first epidemic outbreak in 1894, there had only been a few sporadic records of the virus. British physician Michael Underwood was the first one to provide a clinical description of the disease in 1840. Polio becomes an announced epidemic in 1916, killing more than 2000 people just in New York and leaving 6,000 citizens nationwide dead or paralyzed. In 1994 a vaccination become available. Today, Polio is completely eradicated from the Western Hemisphere. 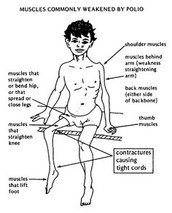 Most people who get infected with poliovirus (about 72 out of 100) will not have any visible symptoms.

About 1 out of 4 people with poliovirus infection will have flu-like symptoms that may include:

These symptoms usually last 2 to 5 days then go away on their own.

A smaller proportion of people with poliovirus infection will develop other more serious symptoms that affect the brain and spinal cord:

Between 2 and 10 out of 100 people who have paralysis from poliovirus infection die because the virus affects the muscles that help them breath.

The polio virus lives in the throat and intestines, and is spread through person to person contact. Contact with an infected persons feces and in less common cases contact with their droplets from a sneeze or cough aid in the spread. The virus may live in a persons feces for many weeks. It spreads quickly, but takes 1-2 weeks for symptoms to appear.

Polio can strike anyone at any age, but mainly will affect children under the age of five. This specific age group will have the most severe complications.

Other complications of Polio:

In 1988, the Forty-first World Health Assembly adopted a resolution for the worldwide eradication of polio. Since this, the number of cases has fallen over 99%. Today only two countries in the world remain polio-endemic: Pakistan and Afghanistan.

- Increase programs in these Polio thriving countries targeted to vaccinate the younger generations.

- Increase vaccination campaign efforts to get the population educated and vaccinated.

- Continuous donations from other countries to help fund Pakistan and Afghanistan rid Polio.

- 80% of the worlds population is now living in certified polio-free regions.

- Type two wild poliovirus transmission has been successfully stopped since 1999.

- Failure to stop polio, in these last remaining areas could result in as many as 200,000 new cases every year, within 10 years, all over the world.