By: Camryn and Grace

By: Camryn and Grace

The Dawes Severalty Act of 1887 affected Indians greatly, without them really even knowing. Although the Act was meant to help the Indians, it had more of a negative effect on their lives

An actual picture of the Dawes Act- CK 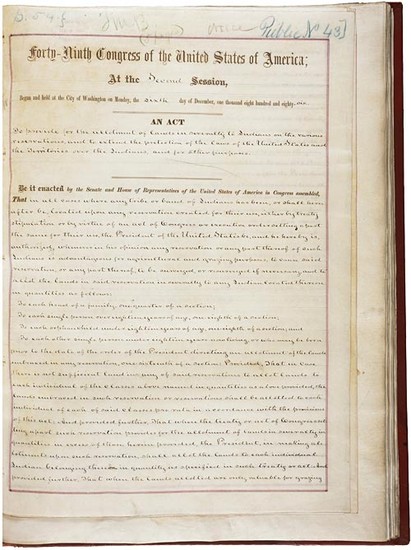 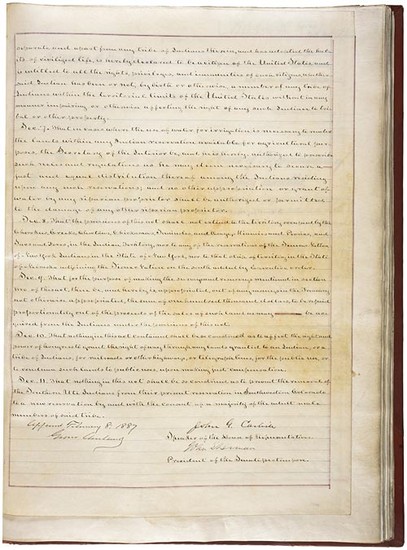 What is the Dawes Act?

The Dawes Severalty Act was created to assimilate the Indians into the "mainstream" white society and protect their land rights.(4) The government wanted Indians to become American citizens and rid them of their tribal traditions.(7) The author of this Act was Senator Henry L. Dawes, and it was approved on February 8th, 1887(6). It allowed the head of a family 160 acres of land(6), but some other people were only allotted 80 acres of land. Allotments that were to be only for grazing were doubled in size.(8) The Indians and other people did not own the land, the government held it for 25 years, and after that period, the Indians became U.S. citizens.(6) The act did not only apply to Indians, it was useful for orphans and settlers under 18.(2) They were allowed 40 acres of land.(6) 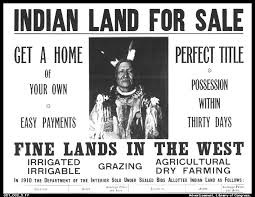 Negative Effects of the Dawes Act

The Dawes Act was never originally meant to harm the indians, it was meant to benefit them. However, there were still many negative effects on the indians. For example, the act broke up indian tribal mass, and actually reduced the amount of land the indians held.(7) The act also created many opportunities for white plundering of indian land.(2) It was easy for them to take advantage of the indians, because they had no experiennce with private land ownership.(6) They lost about 86 million acres of the 130 million they were given, and most of the land remaining was not suitable for farming.(6) Since, the act was created to make indians more like the Americans, it succeeded in disrupting what was left of traditional native american culture, and divided the land.(2) 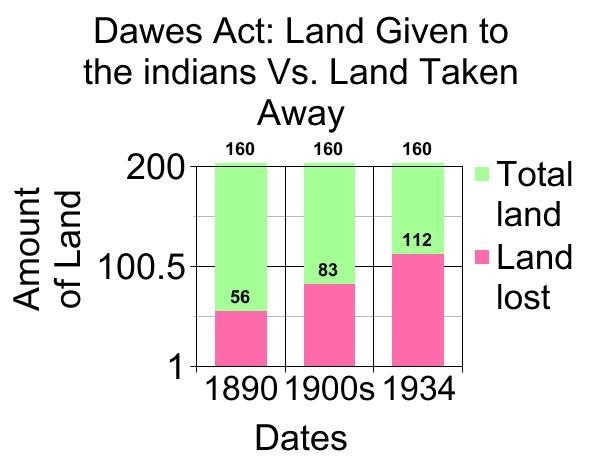 Important People to the Dawes Act:

Henry Dawes had a strong belief that land owning was an important process in persuading people to accept the laws of the government, which is why he suggested the Dawes Act, thinking the native Americans would renounce their tribal allegiances.(3)

Alice Fletcher was a leader in the movement to bring indians into white society. She was hired to inspect all indians land to see if they were good enough for allotment.(4)

"The indian may now become a free man, free from the thronedom of the tribe, free from the domination of the reservation system, free to enter into the body of our citizens, This bill may therefore be considered as the magna carta of the indians of our country."

Indians Affected by the Dawes Act

Throughout the process of the Dawes Act, the Great Plains were commonly known as "checkerboarded." This term referred to the having patterns of white lands and Indian trust lands.(8) 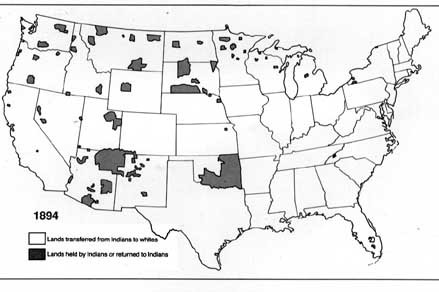 This map shows the Land the indians had left after it was taken away.- CK

A video describing the Dawes act of 1887- CK

Boarding Schools for the Indians

The Dawes Act contained rules about schooling also. Most Indian children were forced to go to school. Thomas Morgan, who was the commissioner of Indian Affairs made sure this part of this act went into effect. He was basically trying to make them like the white children. They were subject to an 8-year schooling process. Thomas thought this would give them a 6th grade education and make them more fluent and better at the English language. When the children got to the schools they were washed roughly, their looks were completely changed, and they were not treated very well. The rules of schooling in the Dawes Act changed throughout the years where the children had to learn vocational skills instead of or more than the math. This focused the schooling more on the kinds of jobs and things the children would need for their lives.(9)

A reform school today is more of a school for juvenile offenders, particularly boys. This is an alternative to jail. Reform schools used t be only for younger kids and teenagers, but it was considered incarceration so they had to change that.(10)

Boarding schools are different these days. Now-a-days they are basically schools were students and teachers can live that are usually very safe and good environments. You aren't forced to go to them and you don't have to change your look and get treated poorly(11) 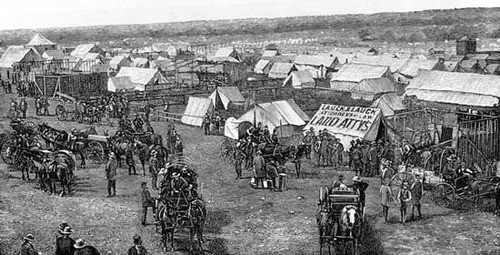 This picture is a drawing of what it would look like while the Indians were moving because of the Dawes Act. GM

10. "Wise Geek: Clear answers for common questions; What Is a Reform School?" http://www.wisegeek.com/what-is-a-reform-school.htm