The Death of Emmett Till

The Death of Emmett Till

On August 24 Emmitt was outside a store was bragging that his girlfriend back in Chicago was white, in order to make him prove this his friends had him go inside and ask the girl behind the counter out on a date. He went inside, bought some candy and was heard saying "Bey, baby", on his way out. 4 days later Charolyn Bryant, the girl behind the counter told her husband about what happened. Enraged Roy went to the home of Till's uncle with his brother-in-law and kidnapped Till. They later beat him and then tied him to a cotton-gin fan with barbed wire and then shot him and threw him in the river.

Three days later they found his body but it was so disfigured that it could only be identified by his ring. About two weeks after Emmett was buried Milam and Bryant went to a segregated court in Mississippi. After the court claimed that they had found the wrong body they claimed Milam and Bryant not guilty, but put them up to a different charge for kidnapping. People all over the area were infuriated at the judges decision. 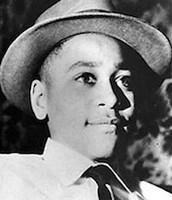 Emmett and his Mother