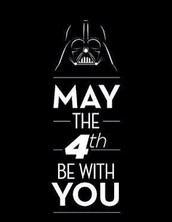 Get ready for Star Wars Day!

Fiction Addiction (bookstore located behind the Haywood Mall) is hosting a Star Wars Day party on May 4th at 4pm. There will be a Star Wars storytime, Star Wars-themed refreshments, and other activities. If you arrive in costume, you'll also receive 10% off your entire purchase!

May the Fourth be with you! 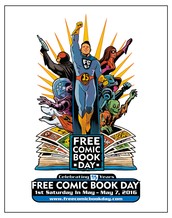 Saturday, May 7th, is Free Comic Book Day! Comic book stores will be giving away free comic books, and many stores may also be hosting special guests, contests, or other events.

The 4th Quarter Reading Challenge is on!

All Fork Shoals students have received their reading logs for the 4th quarter. Students should read as many pages as possible between now and May 20th. Reading logs MUST be turned in no later than Wednesday, May 25th. We’ll have prizes for those who read the most in each grade level, and every participant will receive recognition.

List books (with page numbers) as you complete them. Add your total number of pages read during the 4th quarter. Please print clearly and total your pages at the end. If you need extra reading logs, click here.

See the nominees for the 2016-2017 Picture, Children's, and Junior Book Awards when you visit the Fork Shoals Library blog! 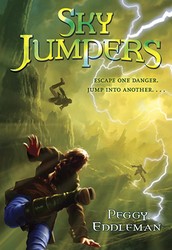 Book of the Week: Sky Jumpers

Sky Jumpers by Peggy Eddleman was a nominee for the 15-16 South Carolina Children's Book Award.

Hope Toriella isn’t like most people in White Rock. Her town, one of the few remaining after the green bombs of World War III, doesn’t have most of the luxuries enjoyed by its predecessors, so everyone does their part to invent the tools they need to survive and thrive. Everyone except Hope, it seems.

Despite her best efforts, Hope is simply no good at inventing. Her inventions tend to end in disaster, and she sees herself as something of an embarrassment. Hope finds some measure of solace and freedom in sky jumping, something she’s really good at…and something she’s not exactly supposed to do.

Whenever she can, Hope sneaks off to sky jump into the deadly Bomb’s Breath, residue left over from the war. Few other people will even go near this dangerous barrier, but Hope enjoys the thrill of doing something so forbidden. Little does she know that she’ll soon have to use her sky jumping abilities–and fearlessness–to save the town that often makes her feel so alone.

When bandits take over the town and attempt to steal rare and valuable medicines, Hope and her friends escape in an attempt to find help. They must travel through the treacherous Bomb’s Breath, endure a brutal blizzard, and survive long enough to summon the guard back to White Rock.

But will that be enough to fight off the bandits holding the town hostage? What more will Hope have to do to ensure the safety of her town and everyone she loves? And will Hope realize that she’s more than just a failed inventor?

When push comes to shove, Hope’s tendency to take risks and “leap before she looks” might just be White Rock’s ultimate salvation.

Please remember to keep your numbered car tags at the end of the school year. Students will keep the same number each year. You may purchase additional tags for $1.00.

The Beta Club is collecting donations for God’s Pantry, May 2-13. The following items are being collected: dish soap, laundry soap, toilet paper, paper towels, shampoo, bar soap, toothpaste, toothbrushes, and pet food. Donations will be collected in classrooms. The class with the most donations will receive a pizza party.

Reminder: May calendar revisions were necessary due to the release of testing dates, etc. and posted a few months ago. The May calendar is on our school website.