Ayden is using Smore newsletters to spread the word online.

Get email updates from Ayden:

The history of Sherlock

The history of Sherlock

This book is about a spy who works in England. He's name is Sherlock Holmes. He works for the king of England. The king sends him on assignments. He goes on these missions with his partner Watson. He went on 13 of these adventures. At the end of the story everything came out to a success. 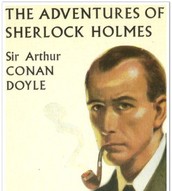 The author of Sherlock Holmes

On May 22, 1859, Arthur Conan Doyle was born in Edinburgh, Scotland. In 1890 his novel, A Study in Scarlet, introduced the character of Detective Sherlock Holmes. Doyle would go on to write 60 stories about Sherlock Holmes. He also strove to spread his Spiritualism faith through a series of books that were written from 1918 to 1926. Doyle died of a heart attack in Crowborough, England on July 7, 1930.

Ayden is using Smore newsletters to spread the word online.