2nd most Dangerous Job on the Planet

2nd most Dangerous Job on the Planet

Flying a plane is a high paying job with good reason there are lots of dangers to deal with in the air. Bird strikes A.K.A a bird being sucked in to the jet engine. Engine failures landing gear failure. Avionic failure which include radar being damaged GPS failure. And highjacks as unlikely as those are. 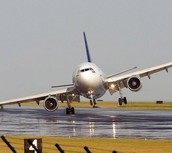 Talk about a bumpy landing

Time to take to the sky