Walter “Walt” Whitman (May 31, 1819 - March 26, 1892) was an American poet, essayist and journalist. He was a part of the transition between transcendentalism and realism, incorporating both in his work. He was considered one of the most influential poets in America. “He addressed themes that were uniquely American, celebrating in particular the life of common people in a democracy.” (Harmon, 1) His style called free verse changed the form of America. (Harmon, 1)

He was born on May 31, 1819 in the poor family of West Hills, Long Island, New York, he was the second son of nine children of his parents. His father moved the whole family to Brooklyn in 1823, and their life remained difficult. Whitman went to public school in Brooklyn, then he apprenticed in turn as a law clerk and a printer, working in Brooklyn. In 1836 Whitman moved to Huntington, and found and edited for a year the newspaper the Huntingdon Long Islander, then he worked as a compositor at the Long Island Democrat. He returned to Brooklyn in 1848 and after he worked several years he published his own 12 untitled poem in a slim volume entitled Leaves of Grass, which was described as obscene for its overt sexuality. Whitman worked from 1857 to 1859 as editor of the Brooklyn Daily Times, and he was also writing poetry. During the Civil War, he volunteered to help nursing wounded soldiers at army hospitals in Washington D.C. He wrote a popular poem for Abraham Lincoln’s death called “O Captain! My Captain”. He found a new clerk’s job but he was fired when his boss found he was the author of Leaves of Grass (Harmon, 2). (Harmon, 1) 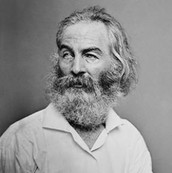 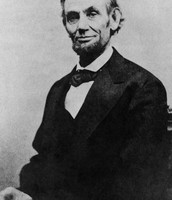 When I Heard the Learn'd Astronomer

WALT WHITMAN'S SCORN for astronomers is quoted often enough to earn an entry in Bartlett's Familiar Quotations. His poem "When I Heard the Learn'd Astronomer" (1865) expresses impatience with systematic observation and meticulous analysis and favors direct contact with the wonder of the night sky. Whitman details how he became tired and sick when "the proofs, the figures, were ranged in columns" and when he was shown "charts and the diagrams, to add, divide, and measure them." Although the audience at the lecture responded "with much applause," Whitman had to leave the room, and, according to his report:

Rising and gliding out, I wander'd off by myself, In the mystical moist night-air, and from time to time, Look'd up in perfect silence at the stars.

Diversity is the Key to Success

Walt Whitman's poem, I hear America Singing, both shows how each individual makes America itself great and how it is important to be diverse as well as yourself. I Hear America Singing shows how each individual makes America great by putting it in a perspective of a Rube Goldberg machine at the same time “as making it a rhythmic tone” (Hollander, John, 1). Society relies on each individual to do their part just as a Rube Goldberg machine requires each part to function properly. If this cannot be done, then the machine, or in this case, society, cannot withhold itself. The analogy that Walt Whitman uses is comparing Singers to individuals in society. “The singers he describes are mechanics, carpenters, masons, boatmen, deckhands, shoemakers, hatters, woodcutters, ploughboys, mothers, young wives, and a girl sewing or washing” (Oliver, Charles.M, 1). The sound that he describes are the sounds of America itself singing its song. “He describes each of these vocations with the same tone as if to say that they are all equally important” (Hollander, John, 1).

The second motif that Walt Whitman’s poem shows is how it is important to be yourself and diverse. As seen within I Hear America Singing, there are many different vocations that are listed which are not the most glamorous of jobs. This being so, they are all necessary for society to run, making them the heart and soul of America. Not to forget the jobs of which are looked highly upon. So when it is said I Hear America Singing, in reality, Walt Whitman is saying that

Walt Whitman’s “A Noiseless and Patient Spider” applies the natural, simple, life of a spider to the complex life of the human(Huff 1). In stanza one Whitman describes the spider, who is patiently unraveling its filament from its body. Likewise, in the second stanza Whitman describes the human soul looking for an “anchor” to hold the “gossamer thread”(Oliver 1). The connection is made that the human soul launches its “filament” hoping it will catch something and hold them while the spider launches its “filament” to form its web, hoping it will find an anchor to support it. Although it is not written directly, the poem seems as if it is a prayer and the anchor that the human is looking for is God. The connections are made from the natural world as the spider to the spiritual world, which is the speaker's soul and his desire for an anchor(Huff 1).

As the reader of the poem, little information is given about the spider except for the action of the spider casting its filament and it is noiseless and patient(Huff 1). It is up to the reader to make the connection between the first and second stanza, which talk about the spider and human soul respectively. Whitman describes the state of the human soul as “lost in measureless oceans of space” longing to find its way out. These “poetic comparisons…, both the spider, and the soul seeking out patients, noiseless and above all, loneliness, for security in an insecure world”(Oliver1). 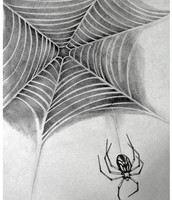 "Till the Bridge you will Need be Formed"