Simran is using Smore newsletters to spread the word online.

Get email updates from Simran:

The graph of a quadratic function is a curve called a parabola. Parabolas may open upward or downward and differ in width or steepness, but they all have the same basic "U" shape. Quadratics can be used to graph many different types of data.

In grade 9 we had learnt about graphing and analyzing linear relation, and now we have moved on to many components of quadratics, such as the basics of graphing these equations in variety of ways. 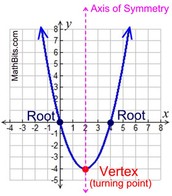 A parabola is created, when a quadratic equation is graphed. Parabolas have:

When using these equations, you deal with factoring and solving for the zeros. A zero of a parabola is another way to say x-intercept, and in order to find the solutions, you need to set y=0.

To graph a parabola in factored form, you need to:
Find the Axis Of Symmetry:

How to find the Vertex:

You use the method of expanding when you want to go from factored to standard form. You multiply each term in the brackets, and then collect the like terms. 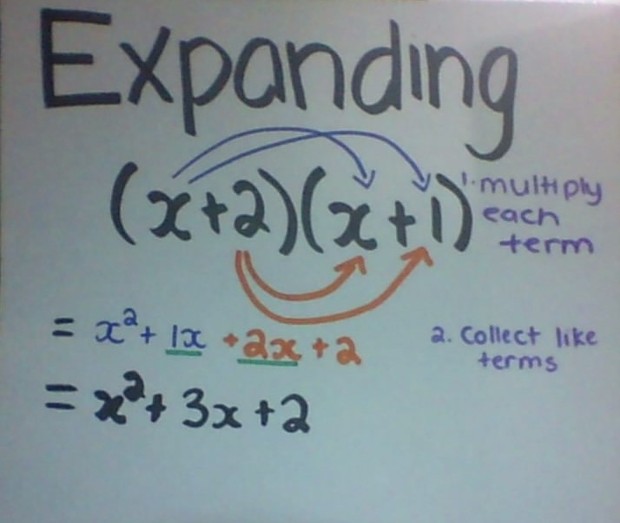 You can use common factoring when there is a number or variable which you can divide out evenly from both terms. When factoring, you are looking for the GCF of the coefficients and the GCF of the variables. 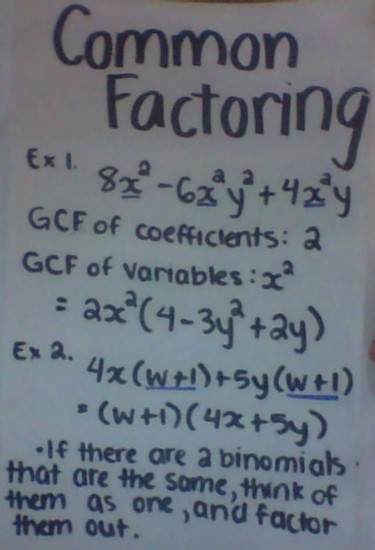 When given an equation in standard form, you can factor to get factored form, by using the product and sum method. This is where you find 2 numbers whose product is (c) in the Standard form, and if those same numbers are added, they should equal to (b). Here's a quick video explaining this method.
Example 1: Factoring quadratics with a leading coefficient of 1 | Algebra II | Khan Academy

In this method, you factor out common numbers or variables, and collect the like terms
Factor expressions by grouping

When an equation is in vertex form, a(x-h)² +k each letter is responsible for a transformation:

When solving for the x-intercepts set y=0 and solve the equation. There could be 2 solutions, 1 solution, and no solution.

The vertex is given by the equation, where (h, k) is the vertex. 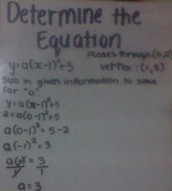 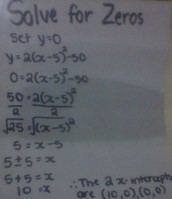 You can solve for the x-intercepts using factoring, completing the square, or the quadratic formula.

The Quadratic Formula solves for the x-intercepts

Discriminant: is a part of the quadratic formula which determines how many solutions there are to an equation.

To graph the parabola in standard form you need to:
Find the X-Intercepts:
Find the axis of symmetry:
Find the vertex: 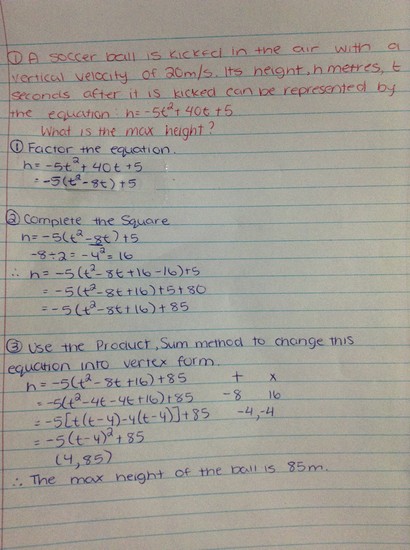 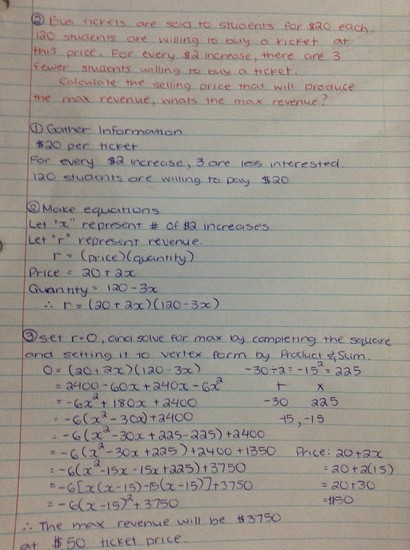 Link Between Equations and Graphs

Equations and Parabolas: All three forms of equations, describe a parabola. It gives you information about different parts of the parabola, you either have to solve for it, or just by looking at it you can get some details. Equations are a written version of a graphed parabola, the graphed parabola is a visual for the equation. In each equation you have to solve for x-intercepts, and the vertex, this allows you to plot 3 points of the parabola.

Discriminant and X-intercepts: Discriminant's tells you how many solutions you have to an equation or parabola. This helps us find the exact number of x-intercepts.

Quadratic Relations was a very interesting unit to learn. I found it easy the first few days, when we started this unit, but as we moved on it got confusing. When we began to learn about the different factoring methods, I was confused on what to use, when. I lost track of which method implies with what. As we went on with the course, I was able to ask questions, and understand what I was doing wrong. I have a better understand on how to find x-intercept, vertex of a parabola, and most importantly I know how to graph a parabola. By the end of the unit, I understand the basic concepts of quadratic functions.

I did very well on the Quadratics Standard form test. I found this very clear and straightforward. Unlike the factored form, where the different methods had me confused. I felt very comfortable with the Quadratic Formula, which I thought was very helpful to find the zeros, and know how many there will be. Perfecting the square, of using the product and sum method was also something I found easy to understand, and use. Creating the equation and gathering information from the given equations, was also something I had liked. Overall this unit was very interesting and fun to learn about. I have learnt many new things, and added on to what I had learnt in grade 9. It was an amazing experience.

Simran is using Smore newsletters to spread the word online.